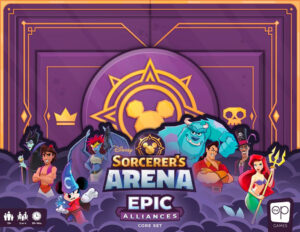 There are a few things that are basically unavoidable in this world; most notably death and taxes as Benjamin Franklin once said. Another one is Disney as the family entertainment giant gobbles up intellectual properties in its own corporate version of Pac-Man or the Borg. Kind of weird that I couldn’t think of a Disney example of this but let’s move on.

Disney’s Sorcerer’s Arena is the Op’s take on the video game of the same name which is a skirmish game using characters from various TV shows and movies in a family-friendly version of Unmatched.

In full disclosure, I am employed by the Walt Disney Company as an engineer at one of the theme Parks. I don’t work with anyone in any gaming or consumer products groups, but I’m still going into this review with an open mind. Even with that potential bias, the BGQ HQ felt like I had fewer conflicts of interest than even the stay-at-home dads among our other writers. My biggest concern with reviewing the game was actually the words “core box” written on it. But I’m sure it’s just a casual game, like X-Wing and Marvel United and I have nothing to worry about.

The rules are set up to slowly introduce players to the game a few pieces at a time over four chapters. For this overview, I’m going to jump to Chapter 4 is also how most people will generally play this game.

For a typical two-player game the two teams of three heroes are serpentinely drafted from the eight available characters in the core box (or more if you add an expansion). Character card decks are shuffled together and a starting hand is drawn based on the hand limit listed on each character card.

Each player stacks their hourglass character tiles in an order. The two stacks are compared and the lowest number goes first and then the order alternates between the two characters.

The following steps are followed on each character’s turn:

For movement and actions, you can take a standard movement/attack that typically allows you to move two spaces or hit an adjacent opponent for two damage. These values can be boosted by one by spending any movement or action card of any character. Alternately, and more interestingly, cards of the active character can be discarded to perform more unique movements/actions. Some cards grant status effects either on yourself or your opponents. Each character also has one unique skill to start the game. The characters can be upgraded by banishing discarded cards of certain symbols to unlock a second, more powerful, skill.

And much like the 1970’s news teams in San Diego, players gain victory points by KO’ing rivals, activating some abilities, and by starting the active player’s turn on specific spaces (okay two of those only apply to the game). Play continues until one team has collected 20 victory points.

The video game this game is based on is your typical free-to-play/pay-to-win game with a lot of microtransactions and different types of currency. It reminds me, mechanically of Star Wars Galaxy of Heroes and Iron Maiden Legacy of the Beast RPG among other apps where you gather shards of heroes and level them and their gear up to get ready to rinse and repeat across similar but different battlegrounds awarding different currencies. So, with that bar set really low what did I think about the Op’s implementation?’
It’s a whole lot of fun.

I enjoyed managing my small hand of cards and trying to decide the best ways to use my abilities each turn. Do I play a movement card to get to one of the victory point spaces? Or do I play it cool and discard one of the cards I need for upgrading a hero at the end of my turn? Cards are often thematic and most of them are really cool which makes banishing a card (sending it to the box for the rest of the game) or discarding a card a tough decision. But, like Elsa sang, “Let it go.”

Besides the cards, each character also has a thematic special ability. Ariel’s special ability, for example, allows her to draw an extra card per turn which has the name “Dig for Thingamabobs”. This is hugely powerful to either bolster your hand, tell you what’s next on the deck, or heal another character, AND add a card to the discard pile for upgrade fuel.

The art all has a uniform look despite the characters spanning live-action, traditional cartoons, and computer-animated cartoons. The acrylic standees look fantastic, but I do have a few small complaints. The first is the Sully is so big (he’s so fluffy! no wait, kitty!) that you have to remove him from his base to put on the health tracker. The second is a few of the bases kept falling off the standees which I solved by putting a small piece of scotch tape on the offending character. The last complaint is that the health trackers don’t rotate smoothly—I found it easier to pop it up and rotate it around. The positive on the not rotating easily is that it doesn’t slide around as you move the figures around.

My last complaint, and this will be solved over time with expansions, is that the content in the core box gives you a sample but you’ll probably eventually want more heroes and villains to mix and match different teams. Everyone will have their favorites so it’s possible certain characters won’t get as much play as others but so far everyone in the core box has been interested to see how they’re different.

Overall, the game is simple enough for younger kids to play, but as a warning to parents planning to play with younger children; the game does rely heavily on strategy. The rules ramping up slowly over four chapters allows you to stop at the right level for your kids.

Disney Sorcerer’s Arena provides a great family-friendly skirmish game in the vein of Unmatched that fits in a relatively small box. If you’re looking to pick between this, Unmatched, or the Funkoverse game; the one with the characters you connect to the best will likely hit the table most.

Sorcerer’s Arena, much like other expandable games is elevated with expansions so this is a game that I expect to be a keeper and one that I’m probably going to buy expansions for. How many expansions could they make, anyway? For reference, there are 160 characters on the app so a lot. The answer is a lot. What characters would you like to see? Let us know in the comments below.

Final Score: 4 Stars – Disney’s Sorcerer’s Arena is a fun and fast-playing family skirmish game with well-known characters beating the heck out of each other with some thematic abilities.

Hits:
• Mix of characters from popular movies and TV shows that play thematically
• Simple rules that are taught over a few introductory games
• Great uniform look for art and standees
• Game is heavily strategic

Misses:
• The core box feels like an appetizer
• This might get out of hand
• Strategic gameplay may be harder for some kids