We review Danger Park, an amusement park-themed game published by Story Machine Games. Danger Park has players constructing rides in a theme park trying to earn the most money. 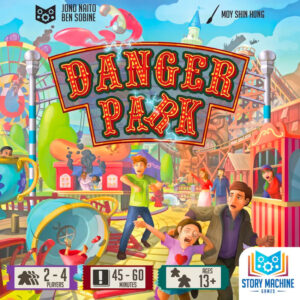 Have you ever dreamed of co-owning a theme park with a bunch of other people? Setting up rides side by side with them, but not sharing any of the revenue? All the while actively hoping parts of the park will fail, but not until you’ve made enough money off of them? Yeah, me neither.

Regardless, that’s the theme of Danger Park, the new game designed by Jono Naito and Ben Sobine from Story Machine Games.

In Danger Park, the first action each turn is selecting one of the three available rides to add to the park. Aside from not being able to go above the park’s entrance, there are no placement restrictions and the rides have no cost to build (which, thematically, seems odd). All the rides have unique abilities, many of which trigger during dice checks later in the round.

Upon placement, each ride immediately receives two standard patrons and a specific danger token matching the ride’s type. There are a variety of danger tokens: bug infestations, electrical issues, and even rides that will make patrons sick. Players also put their token booth standee on the ride to signify who owns it.

Once that ride is placed, the player must then carry out the action of a specific park improvement that is linked to the ride during the selection phase, thereby impacting the entire park. Some improvements can be beneficial to players, while others can be used to target opponents in various ways, such as increasing the amount of danger on certain rides or removing patrons from an entire row or column of rides.

After the improvement action is carried out, players perform dice checks on all the rides in the park that they own. Players roll a number of eight-sided dice equal to the total number of patrons on a ride. Each die is checked individually for success or failure and successful rolls are the ones that hit a higher number than the total number of danger tokens on the ride. In the event of a failure, an additional danger token will be added to the ride and one patron will exit, traveling along the arrows.

At the end of each turn, players get a dollar for every patron still on one of their rides. If ever a ride has four or more danger tokens on it, the ride is closed and new rides can be built on top of them later. There are also additional rules about patrons becoming sick from certain rides which will turn them green and cause them to vomit at the end of every turn (yay theme!).

Each time a customer gets “injured” on one of the rides or a ride closes, players will increase the incident track. The game ends after nine incidents or 13 in a longer variant. The player who has accumulated the most money is the winner.

If I was asked to describe Danger Park in a single word it would be “fiddly.” Every turn there are so many tiny tokens you need to add to various spots on the growing amusement park. There are also multiple decks of cards you need to reset and refill, plus placing your token booth standee on a new ride, and then laying it down after you roll before standing it right back up. Tiny meeples are moving constantly or they’re combining into groups which require them to be switched out for larger meeples or they’re becoming sick which means they have to be turned into green meeples, which—you guessed it— requires even more token distribution each turn.

In addition to the amount of upkeep during and in between turns, there are also numerous contradictions between the rulebook and the powers on the ride cards. The linking of each ride to the randomly drawn park improvement underneath it is interesting, but it just creates another thing you have to contemplate when deciding which ride to pick. And, since these cards are randomly placed, there’s little synergy between any of them. Many of the ride powers are tied to whether your rolls are successful, which makes placing them merely speculative and their specific location doesn’t matter all that much since rides open and close so frequently.

And, then after you do these two relatively basic actions and put all the little tokens on the card, what does every turn come down to? You grab a handful of dice and hope to get lucky. In modern board games, dice rolling isn’t inherently a flaw (my favorite game, The Castles of Burgundy, uses lots of dice), but in Danger Park it’s really problematic. There’s no way to mitigate bad results and the chain reaction that is caused by failures adds about 50 or 60 more things you have to do to the park itself. And, you roll for all the rides you own on every turn, which means in the later rounds you’re rolling a full handful of dice upwards of six or seven times. It’s both frustrating and uninteresting and, frankly, very anticlimactic because when you’re rolling that many dice you just expect to fail at least once. This danger element is handled much better in a game like Dinosaur Island, for instance, where the danger the park faces ramps up logically and predictably.

The game also has a very linear feel throughout. There’s no progression of the ride powers and even though by the end there will be a lot of meeples all over the place, the turns all feel very similar, albeit longer in the later stages. And then the game just ends without any additional scoring or secret placement bonuses or anything else.

On the positive side, the artwork for the game is very good, particularly on the rides themselves (it’s a running gag within the game that many of the rides have dangerous and/or unappealing names and the art does a good job of highlighting this). Otherwise, the components for the game are fine except for the $1 cardboard coin tokens being too tiny. Danger Park also comes with GameTrayz that are more functional than exceptional but work well overall.

One set of components I do want to highlight are the colored “token booths” standees that signify which player owns them. For starters, they do not look like token booths. I don’t know what they were going for, but they more closely resemble a section of a street standing vertically with fencing around it. And this entire concept of individual token booths in a single theme park is also problematic for the theme itself.

I think I can get on board with a theme where you are intentionally sabotaging a park just to make quick money and not caring about the consequences (kind of like a Disneyland version of The Producers.) But since everyone is building a single park it doesn’t make any sense thematically that each player owns different rides within the park. I am not someone who is particularly preoccupied with theme (see my earlier note regarding my favorite game), but this decision is confusing and doesn’t add anything interesting in terms of gameplay.

Even though I knew very little about it, I went into Danger Park fairly excited to see what it offered, but I knew there were issues with the game as soon as I started reading the rulebook. There’s a very limited appendix at the back of the rulebook that includes this explanation: “Help, My Friends Are Arguing About The Rules: If a rules argument lasts more than one minute, all non-arguing players get $1 per minute spent arguing.” Perhaps they should have spent more time addressing the actual rules instead of crafting that joke about how the rules are confusing.

The truth is I’m struggling to even see what the audience for this game is. It’s not really a family game because of the theme and the somewhat complicated rules and even though there’s a lot of dice rolling, it’s not quite light enough to be a mindless dice chucker. And Danger Park is certainly not for the heavier hobby crowd either.

Final Score: 2 stars – Much like an amusement park trying to make as much money as possible before all the rides break, this game was a decent idea with questionable execution.