When I first dipped my toe into the board gaming hobby, the worker placement mechanic instantly became my favorite. I enjoy a game that forces me to decide between a bunch of actions and makes me debate with myself what I’m going to do that turn. Whenever I see a game the uses worker placement, I have to stop and check it out.

This leads us to our newest KotW, Clockwork Kingdom. Clockwork Kingdom is a game that incorporates the steampunk theme with some interesting mechanical elements. The major thing that intrigues me is that each worker has specific skills that allow them to be more efficient at certain tasks on the board. As a bonus, the board also looks amazing. The different city segments on the board make me think of one of my favorite worker placement games, Belfort. 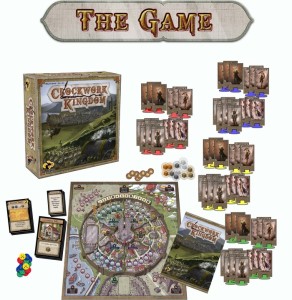 The king has unexpectedly died and has left the kingdom without a successor. The kingdom is in a state of civil war as prominent lords and ladies vie for the clockwork throne. As one of these candidates for the throne, you will use your power and cunning to lay your claim. With your army of loyal steam-powered automatons to do your bidding, you will compete for resources, power, and influence. However, you will have more at your disposal than simple automatons. Throughout the course of the contest, you will also recruit Alchemists, Professors, and Artificers to your cadre of loyal vassals, each with their own unique abilities.

Choose wisely when deciding where to send your servants, whether to get supplies from the market, build useful contraptions in the workshop, or even attempt to acquire powerful alchemy stones, all the while you will be warring with your rivals in a number of battlefields in an attempt to control the kingdom by force. To claim the clockwork throne, you must make difficult decisions to outwit your opponents in an attempt to gather resources, obtain workers, manufacture contraptions, and dominate battlefields. Only the most cunning lord can rule the Clockwork Kingdom…

If you are a fan of the worker placement mechanic or games with a steampunk theme consider giving Clockwork Kingdom your support. If you’d like to become a backer, a $45 pledge will get you a copy of the game and all stretch goals. Clockwork Kingdom is scheduled to be in backer’s hands in June of 2015. You have until Tuesday, September 23rd to become a backer, so head over today and check it out.