We review Chariots of Rome, the spiritual successor to the racing game Circus Maximus. Published by Victory Point Games, Chariots of Rome will have players racing their chariots in the attempt to be the first to cross the finish line. 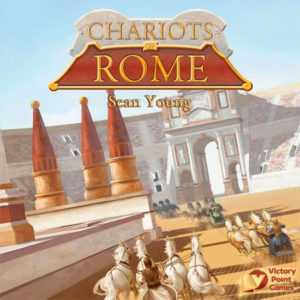 Chariots of Rome is a spiritual-successor of the 1979 classic Circus Maximus. I, perhaps shamefully, never had the pleasure of playing the original. I would take an interest at convention tournaments, peering over the barricades into the tournament corral, but the classic incarnations and the crowd associated with the original were, frankly, intimidating to a new player.

Luckily for me, when Victory Point Games announced that they would be releasing Chariots of Rome, I saw my chance to play the closest incarnation to the classic chariot racing game as a hobby gamer (who has far too limited time and too many games to play for a lifestyle game).

Chariots of Rome is a chariot race/combat game for 2 to 8 players that takes between 45 and 180 minutes and is best with more than 3 players.

Players start Chariots of Rome with (at least one) charioteer, a charioteer card, and a player card which, with the use of different tokens, tracks speed, tactics, endurance, and rattled.

Charioteer color cards corresponding to different players are shuffled and revealed one at a time. When revealed, a player chooses to move his or her charioteer based on the current speed of the charioteer, increase or decrease their speed, or push their horses by spending a tactics point to roll a die and add more distance to his or her speed.

In addition to movement, players can choose to ram or whip other charioteers as they pass one another. These attacks can force chariots swerve (either out of the way or into walls or into other chariots), draw terrifying-white-knuckled action cards which come with their own set of consequences or some combination of the two. After a predetermined number of laps, the race is over and the winner is the (surviving) chariot that crosses the finish line first (duh).

Most recent racing games fall into the “racing with…” category, whether it is racing with betting or racing with hand management or racing with luck. As a fan of F1, modern racing games just haven’t hit the mark for me. Those that are the purest race flavor hit upon simulation well, but a split second overtaking in a chicane can take several turns to complete. Likewise, the original Circus Maximus forced players to track several layers of complexity and turning a (historically) 9 minute race into something 20 or more times that.

Chariots of Rome does not fall into either of these groups. While it is better to think of this as a streamlined chariot race simulator, it is not a racing game with a chariot race theme tacked on to it. A big piece of what drives this home is the pacing. The turns move quickly and players are forced to be very tactical. Chariots that have bunched up in a corner in between turns can have white knuckle implications for the former leader of the pack. This is not carried out over several arduous turns of maintaining statistics and penciling in arbitrary numbers, but nearly immediately.

A single turn rarely takes up to a minute and watching the events unfold on the board in front you allows you the unique opportunity of not only playing the charioteer in the action, but also the peanut gallery in the stands. Perhaps most interesting about this shifting of roles is that players can find themselves rooting against their own chariots for the theatrics of it all.

One of my favorite aspects of this game are the Charioteer cards. These cards give players unique abilities or rules changes throughout the game ranging from free actions to buffed actions and beyond. After several playthroughs, it has become apparent that the charioteers are varied enough to take on their own personalities in the eyes of the spectators and players – especially Terrorux, the demon helmed marauder of the circus that earned hisses and boos each time he was up to take his turn. Competition is fierce between players and remains so because of the personality of these Charioteers.

And then finally there are the Fate cards. Arguably, these are the most “tacked-on” of the mechanisms because they aren’t required, but they are a blast to play with. At the start of each round, dice are rolled that will provide players with a bonus, or require that a Fate card is revealed. These cards change standard game mechanisms, giving players boosts or, more likely, complicating players’ actions. For example, the “And the crowd goes wild!” card forces chariots in first, second, and third places to drop potentially career-ending debris in their wake. The apprehension and excitement of rolling the fate dice and revealing these cards becomes more intense as rattled points are accrued and endurance points dwindle.

I found this to be one of the more memorable racing tabletop games I have played. Chariots of Rome is accessible, easy to learn, easy to set up, and easy to schedule with the gaming group. Best of all, a single race doesn’t have to take all night in order to complete. Case and point, I was able to teach the entire game within 15 minutes at our weekly brewery meet up. All players were invested, standing, and chiding one another by the time we made it out of the first turn. The turns play quickly and the attacks and cascading swerves and crashes kept my players on the edges of their seats.

So, does Chariots of Rome scratch the Circus Maximus itch? For me, yes and for my gaming group definitely. For the most part, Chariots of Rome is more accessible than Circus Maximus, easier to learn than Formula D (but not necessarily much simpler), and has a variable enough race length that a sprint to the finish can be followed up by marathon session rematch.

More importantly though, does Chariots of Rome scratch the racing game itch? 100% absolutely, yes. This has taken the cake of racing games for me. It is truly about the race and does not share the stage with other distracting mechanisms. In fact, the closest additional gaming element included in Chariots of Rome are practical push-your-luck mechanisms when players choose to barrel into corners. The game is involved, fun, and exciting. In the few instances of player/chariot elimination that would normally be frustrating, Chariots of Rome proves itself to be just as fun as a spectator sport. All in all, this high horsepower racing game that hits on all cylinders.

Final Score: 4.5 Stars – A true racing game that is fun and polished from start to finished

Hits:
• Charioteer and Fate cards keep the game fresh
• Pacing is excellent
• Much more than a Nascar race with horsies

Misses:
• Something more than standees would have been great
• Players might get frustrated by some Charioteer characters