We review Cauldron Quest, a cooperative, dice rolling family/kids game where players must work together to get all of the ingredients to the center of the board. 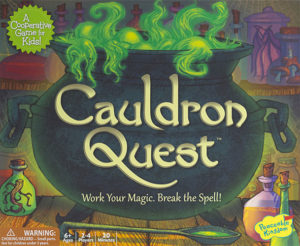 Sometimes a game just catches you eye for a small reason. Maybe it is a cool looking pieces, amazing art, use of a dice tower, or, in the case of the game we will be reviewing here, the shape of the board. Cauldron Quest is a cooperative kid’s game where players are attempting to thwart the evil Wizard from destroying the kingdom with his evil curse. Players will roll dice to determine their actions that turn, however, this isn’t just a simple roll and move game. That makes it better than a lot of kids’ games, but it is worth having in your collection? Let’s get to the review to find out.

Cauldron Quest is a cooperative dice rolling game for 2-4 players to complete in 20-30 minutes. In my time with the game, I find it plays similarly with all player counts.

Players are tasked with moving the three potion ingredients necessary to the bubbling cauldron at the center of the circular game board. The issue is that you don’t know which ingredient is in each of the potion bottles at the start of the game. Each turn, players will roll the set action dice to determine what they will do on their turn.

Players may be able to move one of the potion bottles closer to the center, move the Wizard looking to block your path or send bottles back, place a path blocker on one of the six paths, or roll the magic dice.

The magic dice give you the opportunity to reveal ingredients, swap the location of Potion Bottles, or a super power charm to move more spaces and place path blockers. In order to use these charms, you need to roll either all even, odd, or total 12 on all three of the dice after three rolls of the dice.

Players need to reveal all three ingredients necessary to stop this evil curse and move them into the cauldron before the last path blacker is placed on the game board to win.

After reading through the rule book for the first time, I had a major concern about the game because of the predominate use of dice rolls to determine your actions. Even my kids interests are starting to dip with games that are roll your dice and move your mice. However, Cauldron Quest doesn’t fall into this trap completely and manages to give players some meaningful decisions.

There are two basic results for the players when they roll the action dice, good or bad. The bad results (path blocker or moving the evil wizard) are on autopilot like most negative effects in a cooperative game. Good dice rolls require decisions from the players. For example, the move the potion result seems simple, but players must be careful to not put the potion bottles in a space where the wizard or path blockers can force the potion ingredient back to start.

The game becomes more interesting with the spell result on the dice. Players must think about the three possible spells and decide which one will be the most advantageous at this time. Getting the potion contents revealed is paramount early in the game, but swapping locations or moving extra spaces and over obstacles are important later in the game. This variety keeps the die rolls interesting and is easily my kid’s favorite part of the game. They love just trying to get that last die to get the result they need and this builds some decent tension and memorable experiences. They are disappointed when they don’t get the chance to do this element of the game on their turn.

Now, this is a dice rolling mechanic that has no manipulation of the results. This naturally leads to games where you just get a bad run of the dice and end up with a string of negative effects in a row, which happened more than once for us. This is just something you expect with a game like this, however, I wish they would’ve added some dice manipulation element for the players to utilize.

The mechanics are just good enough to keep the game interesting for parents, but it’s the theme that ties it all together for the kids. The idea of thwarting an evil is a great theme for any cooperative game and kids connect to the quest of stopping the wizards plot. Even after ten plus plays of the game, my kids are still excited and disappointed depending on the result at the end of the game. My kids normally don’t care a lot about the theme of a game and the fact that this has held this long is impressive.

Cauldron Quest is a wonderful game for kids to enjoy with their parents. There are enough meaningful decisions and a great theme that keeps kids invested. The one hitch is that all actions are determined by dice rolls the results can lead to an uneven experience when you roll negative effects a few turns in a row. Despite that, Cauldron Quest is a rewarding experience that allows kids to make their own decisions while defeating an evil force. If you are looking for a new cooperative game to play with your kids aged 5-9, I would highly recommend getting Cauldron Quest.

Final Score: 4 Stars – Even with the high level of randomness from dice rolls, Cauldron Quest is a great cooperative game that has enough decision making and gripping theme.

Hits:
• A theme that keeps kids engaged
• Great production values
• Everyone has enough decision making at every point of the game

Misses:
• No option for dice manipulation
• String of bad results can ruin a game