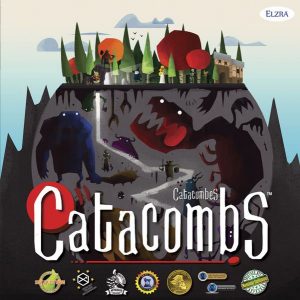 I’ve had my eye on the new edition of Catacombs for quite a while. It marries a dexterity game (flicking specifically) with a dungeon crawler, which are two of my favorite types of games. So, of course, when Elzra Corp offered to send over a copy of Catacombs Third Edition for us to check out, I immediately jumped on the chance. This edition boasts updated artwork, revised rules and components, and even a wall to try and keep pieces contained. So warm up your flicking fingers as we delve into Catacombs: Third Edition.

In Catacombs, one player takes on the role of the overlord (think the Dungeon Master in D&D terms) while up to four other players control the four heroes. The goal for the heroes is to make it through all eight rooms of the dungeon and slay the evil lord. While the overlord wins if all the heroes are killed. The heroes will have an array of weapons to literally throw at the monsters, while the overlord can control a host of classic fantasy monsters, each of which their own stats and abilities.

Each round starts with the overlord revealing the new room and what monsters are in it. Once setup, the heroes go first and perform one action each. This is either the basic shot on their hero card, or using an ability, spell, or item card. Melee attacks are handled via flicking your disc at a monster. Most have only one hit point (although some have up to 4), so hitting it will kill it, earning your adventurer some gold. After all heroes have taken a turn, the overlord activates their monsters, which work in a similar manner.

Once the heroes have killed all the monsters in the room, the round ends, and they move on to the next room.

The only other thing to note is that there are a variety of shot types and modifiers. Both heroes and monsters might be able to fire off ranged attacks or magic spells using separate discs. Shot modifiers include things like chaining shots, fear, poison, stun, etc…

While I kind of breezed through the gameplay overview, there is actually a good amount going on in Catacombs. Each hero not only has special attacks, but once you start buying items, their options just increase. In fact, the Wizard starts the game with 10 spell cards (one time use) that all have a variety of effects. I was happy that it wasn’t simply just flick your token and move on. Players will have to think strategically. In fact, just looking through all the monsters and equipment and it’s clear that a lot of thought went into the creation of the game. Despite being a dexterity game, Catacombs did a really good job staying true to its RPG roots.

That being said, I would have liked to see a few more heroes in the game. The overlord has a nice variety of monsters to throw at the heroes, but the good guys only have 6 options to choose from, with one being a fighting chicken that feels more like a joke than a serious hero. Browsing the Elzra website does show a few expansions so it looks like there are plenty of options for more Catacombs excitement should you find yourself wanting more heroes, rooms, and monsters to choose from.

I also should note that the rulebook for Catacombs is…not great. The information feels kind of all over the place and I was constantly flipping back and forth looking for answers to questions that came up. I had a really hard time figuring out how to set up the room cards in the dungeon at the start of the game. To be honest, once you’ve read the how to play book, just download the player aids from Universal Head. They are a wonderful reference and should answer most questions you have.

Despite the rocky rulebook though, the overall gameplay of Catacombs isn’t very hard. Pick a hero and flick it. If you hit something, you do damage. Easy peasy. The board also has big, chunky blocking columns that you can not only use for cover, but also to bounce your token off for trick shots. And those are the times when Catacombs really shines. When your wizard, cowering behind a big pillar, fires off a desperation fireball that ricochets off another pillar and strikes two bad guys that the overlord thought was out of reach. It’s a great feeling that will elicit cheers from your fellow players and even a bit of admiration from your opponent.

Finally, I must say that I do love the changes in the third edition. Having played the original, this edition is a clear winner. The artwork from Kwanchai Moriya is a night and day upgrade, and the components are excellent. Yes, stickering the discs still takes a bit of time, but the sheets are all clearly labeled making it a pretty smooth experience. Elzra sent us the Playmat Version, which I’d highly recommend over the base version as the playmat make a great flicking surface (and it comes with an expansion as well).

I haven’t played Catacombs since the first edition almost 10 years ago and I forgot how much I enjoy this game. The flicking is a ton of fun and this isn’t just a simple filler game. A lot of thought went into the creation of the monsters and heroes, leaving lots of room for player strategy and excitement. Catacombs: Third Edition also scales well, as even if you have less than 5 players, controlling more than one hero isn’t a chore. In our games, we also found the balance to be pretty spot on. In all of our games, the heroes have at least made it to the final room and one game literally came down to the last flick of a disc.

If you have even a remote interest in a dexterity based dungeon crawler than Catacombs: Third Edition is definitely worth checking out. It’s fun, thematic, has smooth gameplay, and lots of support with expansions.

Final Score: 4 stars – An excellent marriage of a dungeon crawler and a dexterity flicking game.

Misses:
• Rulebook could be organized better
• Could use more hero variety