Board Game Review By::
Jeff Patino 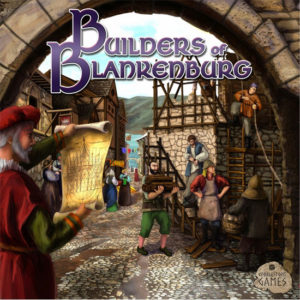 Have you ever discovered a hidden treasure, something you didn’t expect to ever find but when you did, your heart skipped a beat. This happened when I played the Builders of Blankenburg for the first time. It was like opening, smelling and tasting a vintage, fine wine after it was once thought lost in the dark recesses of the old cellar.

Builders of Blankenburg is published by the Cobblestone Games and first-time-designer Peter Schultz. It is a game for 2-5 players that plays in 60-90 minutes.

The title of “Builder of Blankenburg” gives away its intent. This euro-style game focuses on building structures with income and resource management required to support that activity.

In Builders of Blankenburg, players vie with each other to construct the most prestigious structures of 4 different types: Civic, Commercial, Religious and Residential. They do this by obtaining and paying specific resources required to construct each structure from plans they purchased during the game.

The players are also attempting to entice the townsfolk to stay at their structures by matching the townsfolk’s list of preferred building.

The production quality of the board, cards and cardboard components are excellent. The cards are linen-finished and appear to be able to hold up well, even with periodic shuffling. The resources are wooden or plastic and are chunky and nice to hold and handle.

An exceptional feature of this game is its art. The game board depicts Middle Ages Blankenburg, with new construction going on all over the town. The game board is two-sided and the other side depicts a sketch of the city which looks like a set of building plans. The cards all have unique art and depict the people and the buildings they lived in during the period.

Players begin the game with 1-wood, 1 stone and 12 silver coins. They also are dealt 1-starting basic plan and 1-character card (giving them a unique benefit).

Each turn consists of 4 Phases:

The game end is triggered when:

The Builders of Blankenburg melds several euro-style mechanics together into a fluid game-playing experience. Like in most games that center on building, the key to being the best builder is to manage the type and amount of resources that are required to keep pace with your competing builders and gauge when it is the most opportune time to build.

What’s most interesting about the building in this game is that you don’t only gain benefit (prestige) from constructing better buildings when they become available, but you gain income each time a visitor or citizen decides to stay at one of your buildings on the board.

A unique and clever aspect of this game that sets it apart from other building construction games is the citizen’s track. Each citizen that has been placed on the track has a prioritized sequence of three desired structures where they would prefer to stay. Players have control of how the prioritization is fulfilled by constructing structures on the board that take precedence of being chosen over their opponents structures. Structures also have occupation capacities that if reached, do not allow for more townsfolk to stay at them. I greatly enjoyed trying to optimize my payouts and cutting off my opponents from obtaining income.

I discovered that the random elements of the game seemed balanced and brought enough surprise to alter game decision-making in a good way. The effects on the visitor and event cards can apply to any or all of the players. Since they are drawn at the beginning of the income phase, they may affect that phase and the marketplace phase. The effects for the most part are beneficial for one or more players, but players must be wary of the adverse effects and be able to handle them accordingly.

The visitor, like the citizen, has a prioritized sequence of desired structures they would prefer to stay at, but they have only two instead of three. The visitor will choose first where to stay before the citizens so the income payout for each player may be changed positively or negatively or not at all.

I found the bidding at the beginning of each turn for resources to be simple and highly competitive, even in a 2-player game. Garnering the necessary resources was always an interesting challenge. Using a blind bid technique, it’s important to set yourself us for success on the next build turn based on resources available in the marketplace.

I liked the combination of control and randomness that makes up the seeding of the bidding wheel with resources. The fact that the resources that were not bid on stayed on the bidding wheel for the next turn was a great design choice. I also found it interesting that only up to 3 resources could be taken from any one spot on the bidding wheel. These aspects fed the competitiveness of this phase and made it very rewarding when you pulled off a viable bid.

One of the early game strategies that I discovered in Builders of Blankenburg is to build inn structures when they become available. Whenever a visitor or citizen does not have a structure on the board to stay, they will stay at an inn. Inns can provide a great way to earn income early in the game.

One of the late game strategies that gets employed quite often is to demolish an existing structure you own, gain one wood and/or stone, and then either build in the now empty spot or leave it vacant. This strategy allows you to rid yourself of structures that no longer are providing an income payout and to replace them with one that is more desirable to stay at. However, if a grand structure is replaced, the player is dinged with losing one prestige point. This penalty is normally outweighed by the gained prestige and income potential of the new structure.

I have played the game at quite a few player counts and think it scales well from 2-4. If one wants to play an open, strategy-building type of game, then the 2-player game hits the mark. If one wants to play a tight, battling for resources game, then at 3 and 4 players, the Builders of Blankenburg does not disappoint. Although I haven’t played the game with 5 and 6 players (the game contains components to support six players), I feel that the game may be a bit too tight and possibly unforgiving for my liking when played with those higher player counts.

The Builders of Blankenburg provides some unique and engaging gameplay. It is a challenging, highly interactive and competitive game. It will appeal well to gamers who like the euro-style type of game. I found this game to be a hidden gem and certainly has fallen under the radar in my opinion.

If you’d like to pick up a copy of Builders of Blankenburg, you can get it for about $55.

Final Score: 4 Stars – A game that breathes new life into the building-construction euro-style with its distinctive gameplay.

Misses:
• 5 and 6 player counts may be bit too tight and chaotic