We review Blue Lagoon, an abstract strategy board game published by Blue Orange Game. Said to be the spiritual successor to Through the Desert, Blue Lagoon will have players making connected paths of boats and huts to try and earn victory points. 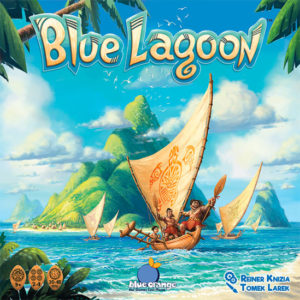 Reiner Knizia is one of the most prolific designers of modern board gaming and today we are looking at his newest release, Blue Lagoon. Somewhat of a reimagining of Through the Desert, players will place pieces in adjacent chains onto the map to try and score points in a number of ways. Blue Lagoon is a simple to learn abstract game, so let’s take a look at how it works.

Blue Lagoon is an abstract strategy game for 2-4 players. It plays in about 30 minutes and is best with 3 or 4 players.

Blue Lagoon is a tile-placing game played over two distinct, but similar, rounds. To open the game, players can enter the board from any water space. Each subsequent token can be placed adjacent to another token for that player or in any water area. You can also place a hut on a land space adjacent to one of your player tokens.

If you place a hut or token on a resource or statue, you collect that piece. Play continues around the table until either all player pieces from been played to the map or all of the resources have been collected. You then score for your sets of resources, number of islands you’ve inhabited, unbroken paths you can create between islands, and area control on each individual island.

After scoring, all tokens are removed from the board. Huts remain for the next round, unless they are placed on resource space. The scoring for the second round remains the same, but tokens have to played adjacent to huts rather than being able to be played in any water space as your villagers have transitioned from explorers to settlers.

The second round ends just like the first, with all resources claimed or all pieces played. The round is scored just like the previous round. Both scores are added together and the player with the highest total score is the winner!

Blue Lagoon is a fairly abstract game as players will create chains of tokens trying to reach resources, islands, and have the most control of each island. Despite the scoring being the same, each round feels very different. During the first round you can start all over the map, easily spreading out based on what resources you want to gather and which islands you are trying to reach or control.

You must also keep in mind how you place your huts around the board. Ideally they will be spread out around the map giving you the ability to jump off on various sides of the map in the second phase of the game. But you know where other people are able to start from, allowing players to cut each other off more easily than the opening exploration phase.

All of the information is out in the open, which creates some direct interaction. It isn’t necessarily mean, but you will be racing against other players to the same resources and pathways. Because you have to move adjacent to an existing token you can see how far away your opponents are from resources you need. If you are next to a fire resource that you want to gather but the nearest opponent is two spaces away, you can wait until they move closer to force you to take it. There are no super-secret powers that will allow people to do anything unexpected.

Blue Lagoon scales well with all player counts. The only changes for different player counts is the number of tokens each player has available to them each round. I enjoyed Blue Lagoon most with 3-4 players as there is more tension about when you have to make your move for certain spots. Although no one can move more than one space in a turn, with multiple players if you are waiting until an opponent moves adjacent before grabbing something it’s possible both opponents can force a move on you, making you choose between them and giving up something to one of your opponents.

The scoring is a bit convoluted, but the included scoring pad lays everything out pretty well. The rulebook suggests giving players a scoring sheet to look at during the gameplay as a reminder of how the game scores at the end of the rounds. There is a lot of different ways to score points so it is very easy to forget about some of those things when the pressure is on.

Blue Lagoon is a great quick playing multiplayer abstract game. The artwork is beautiful and map and wooden pieces look great on the table. It is a good family weight game that is easy to learn but has plenty of depth for experienced gamers to dig into.

The distinctly different rounds give a layer that makes Blue Lagoon feel unique and gives players a little more control and allows for a variety of strategies to be attempted.

Final Score: 4.5 Stars – A great Knizia title with a good amount of depth in a 30 minute package.

Hits:
• Very easy to learn and plays in about 30 minutes.
• Decisions are meaningful and difficult to make throughout the game.
• Rounds feel quite different with very minimal rules differences.

Misses:
• Theme is pasted on.
• Scoring is somewhat complex