We review Big Dig, a new game in the roll and write genre published by Tasty Minstrel Games. In Big Dig, players are racing to be the first player to complete all three objectives for the game. 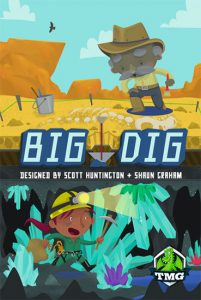 Roll and Write. Polyominoes. 8-Bit art? I mean, that’s basically all you need to know, right?

Big Dig basically takes the hottest trends in board gaming and smashes them together. It isn’t the only game trying to pull this off and the market for roll-and-writes with Tetris shapes is quickly being flooded. So what makes Big Dig any different? Is this small box worth a spot on your shelf?

Big Dig is a draft-and-write game for 2-4 players. It plays in about 15 minutes and plays best with at least 3 players.

Big Dig is a roll-and-write style game, yet there are no dice to be found. Instead, players will draft one of the card shapes from the middle of the table, marking off the pattern that they select. After all five cards have been chosen, the cards are returned to the center and flipped over, changing the shapes that are available.

At the beginning of the game, three goals will be chosen randomly and you’ll be racing against other players to complete all three of the objectives. There are many different options, including connecting pipes on opposite sides of the player board, delivering water from the bottom to the water tower at the top, and completely marking off all of the boxes around precious artifacts.

When you select a pattern you must always mark off at least one box that is adjacent to an existing box that has been “dug,” or one that is at the very top of the player board. In this way you can start multiple disconnected paths but only if you continue to start at the very top. Also, only some of the boxes can be dug out. Others are filled with rocks and can only be marked off if you use your whole turn to explode a single square. The chosen square must follow the same adjacency rules. While you’ll only get to mark off a single box rather than four or five, it’s necessary at times to fill in small gaps.

Play continues until one player has completed all three goals and that player wins.

Roll and writes have caught fire in the board gaming world and for good reason. They offer many strategic choices in a small package. They often play quickly, are easy to teach, yet have meaningful decisions. And players can all take turns simultaneously making downtime essentially zero. Not to mention many of them can accommodate dozens or hundreds of players at once.

Big Dig basically fails to stand out on any of those fronts. Most similar games offer some amount of tension—a push your luck element or the unknown of the dice or cards each round. In Big Dig, the scope of what is and will ever be available to you is known right out of the gate. Now you certainly won’t know exactly which shapes other players are going to pick, but there isn’t much you can do to count on any certain pieces coming back to you.

Instead, the game hinges on efficiency optimization, trying to make the best use out of each piece. In practice, that means keeping things as connected as possible and not leaving small gaps that you have to deal with later using the much-less-interesting explosion option, rather than marking off the entire pattern. While this isn’t inherently bad, it grows a bit tiresome and makes repeated plays less enjoyable.

Big Dig is, at the end of the day, a racing game. All players are trying to complete the same goals and the player who does so first wins. Which brings me to the biggest concern—first player advantage. There are no even number of turns, the game simply ends when anyone has completed all three goals. I’m not saying the first player always wins, they don’t. But they should. Each round every player should be marking off 4-5 spaces. Of course, there are plenty of opportunities to get stuck with a bad piece or not take the best route to complete a goal, but it’s way more likely for the first player to win than anyone else.

Big Dig is limited to four players in part because there are only four dry erase player boards in the game. But there are also only 5 piece cards and turns aren’t simultaneous in any way, so you’ll have some downtime waiting on the game to get back to you doing your thing.

There is a ton of replay value in this package though. The player boards are double-sided, giving a slightly different layout you can choose to play. There are a dozen end game goals and only three are used each game, allowing for approximately infinite combinations. And the fact that the pieces will get paired together in different ways will also change how things work out. Unfortunately despite the goals being mixed up and the boards being different, the process for making the decisions didn’t really seem to change from game to game.

If you have younger children, Big Dig might be a good introduction to the roll-and-write genre. The drafting doesn’t add much in terms of complexity and the retro video game artwork works well. It is simple to learn and you can play it almost anywhere as it has a very small footprint.

For most gamers, I’d recommend looking for a more versatile game in the roll-and-write genre. Big Dig is too light, too limiting on player count, and wears out its welcome far too quickly.

Final Score: 2.5 Stars – A light, unmemorable roll and write with a drafting element.

Hits:
• Quick to learn and maybe good for an intro to the genre.
• Nice production with dry erase player boards.