We review Betabotz: Byte of Passage, an auction card game published by B&B Game Studios. In Betabotz, players are buying components to upgrade their bots to be the one betabot to make it into the promised land. 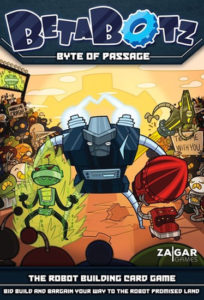 Often in movies or TV shows, people come up from nothing to something. It’s that struggle to adjust that is the main thrust of the plot. Today, we will be looking at a game that doesn’t deal with the aftermath of that change, but instead, the process to get to the promised land for a few Betabot robots living in Comptown.

BetaBotz: Byte of Passage is the journey of a few robots who attempt to make it to the land of plentiful gears and endless oil that is Robotopia. But only one can make it into this promised land and players must compete over a series of challenges to earn the most Bitz by the time they reach Robotopia. Let’s get more into the review to see if this robotic journey is worth a place in your collections.

BetaBotz: Byte of Passage is an auction card game for 3-6 players to play in 30-60 minutes. In my experience the game plays best with 3-4 players.

Enhancing your Betabot and completing missions to earn Bitz are the two main phases of the game. At the start, you will flip over Betabots cards equal to the number of players. Each card has a starting level of agility, firepower, structure, and processor that they will be able to modify throughout the game.

You won’t be stuck with these base values for the whole game. Each round, players will bid using Bitz to purchase Component cards to improve their robot’s base stats. If another player out bids you, you take your bid back and are allowed to bet on the same card or another card all together. If you don’t want to place a bid, you can take a Code card that will give a one-time use effect. There is one less component card than players, so at least one player will take a code card each round.

Up to five component cards can be placed underneath your Betabot. If a player is able to get an attribute of their Betabot to be thirteen or above, they earn a Limit Breach card that gives you special abilities.

The second phase begins with a mission card. Players can attempt the mission on their own, or team up with other players to meet the required attribute values on the card. If you complete as a team, you must split the rewards but take all the consequences if your team fails.

These phases will continue until ten rounds have passed. There are some special bonuses for highest attribute, certain component and code cards. The player with the most Bitz at the end wins the game.

There are a lot of cool mechanics at work within BetaBotz. I enjoy the handling of the auction mechanic where you can choose, once you are outbid, to switch to something else. This allows players more flexibility each time there is an auction rather than being stuck with one component type once it gets too expensive. This flexibility does make the auction phase drag out a little longer than in other games, but I like the freedom to change your plan enough that it’s a minor issue.

The fact that players can team up during the mission phase is a good mechanism. While you won’t be able to reap the full rewards, it’s better to team together to get something out of each mission and not just take the negative consequences. This stops one player from running away from the rest and keeping the currency gained relatively close. Also, there are times where you are not able to team up with anyone because they have the required attributes to complete the mission by themselves and they will leave you in the dust. This leads me into my major issue with the game.

I like a lot of what the game has to offer, however, there is one thing that overshadows the rest of this game and that is the lack of knowledge of what missions are coming up. This makes the value of the components unknown to the players. You can spend a decent about of Bitz to upgrade an ability that isn’t used during the missions at all and you never recoup your cost.

This leads to an inconsistent experience for each player depending on how the missions appear. I wish there was a system to organize the missions so each attribute would be tested or the ability to see the next mission and thus properly value components during the bidding phase. The lack of information hurts the overall experience.

Even with this cloud over the game, I still had an enjoyable time playing the game. When the missions were balanced, the game was fun and the back and forth of negotiation with teaming up lead to some humorous exchanges. Finally, the code cards are hit or miss for me. On one hand they can help you get closer to completing missions, but too many have strong “take that” element that doesn’t fit as well with the auction mechanic.

BetaBotz is a game that is almost there for me. I love the auctions system, the individual/team mission options, and Limit Breaker cards. I can deal with the auction taking a little long and code cards having a “take that” element. However, not having any idea of what mission requirements are coming up takes some of the luster out of the game. All the clever bidding and optimization can be for not if you don’t choose the right attributes that come up in missions. Betabotz: Byte of Passage has a great experience within the box, however, it isn’t doesn’t show up every time you play.

Final Score: 3 Stars – While the game has interesting mechanics, they are ultimately overshadowed by lack of information for the mission phase of the game.

Misses:
• Lack of information hurts the game
• Code cards have too much “take that” elements
• Auctions drags a little too long with more players