We review Bahamas, a party game for 4+ players published by Matagot. In Bahamas, players are trying to have the most money, and a parachute, before the plane crash lands. 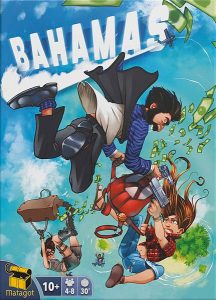 You’ve pulled off the most improbable heist. Bags are just loaded with cash and you and your co-conspirators are on a plane headed for—well, the Bahamas. But of course, your plane starts having mechanical issues. You are going to crash. And there aren’t enough parachutes on board for everyone. Find a parachute, grab as much cash as you can, and hold on tight!

Bahamas is a dice drafting and take-that game for 4-8 players. It plays in about 30 minutes.

Each turn of Bahamas is incredibly simple. You’ll draft one of the available dice and perform the associated action. Generally, that will be to draw an action card, a cash card, or steal one from a player of your choice. There is also a die face that will let you activate your character’s special ability, which is often very powerful.

The goal, of course, is to accumulate as much cash as possible. The “crash” card is hidden somewhere in the bottom five cards of the action deck and when it is drawn the game ends immediately. The player with the most cash wins… as long as they have a parachute. Unfortunately, there are always 2-3 fewer parachutes than players in the game.

Maybe the life of crime isn’t really for you though. If you accumulate the three FBI cards—badge, phone, and handcuffs—you can reveal them any time during the game and win immediately.

Action cards can be played at any time, even when it isn’t your turn. These give Bahamas it’s “take-that” feeling as they will almost always involve preventing someone from doing what they want to or taking cards from them.

The fun you’ll have with Bahamas is directly correlated to how much you get into the theme. Its Reservoir Dogs-style setup is one of its strongest selling points. The game itself does just enough to not really get in the way of the trash talk and slight bit of stress, racing against the plane’s eventual demise.

Obviously, take-that is the main part of the game here. There isn’t a lot of strategy or planning. This is a party game through and through. The dice drafting element is interesting and would actually like to see a slightly heavier game try to use something similar. There is always one die less than the number of players, so the person who doesn’t get one each round becomes the first player of the next round and has the best selection of dice to choose from.

The player count is worth mentioning, Bahamas requires at least four players but supports up to eight. The sweet spot is probably around six to keep the game short enough to be enjoyable but still have enough things moving around. As is often the case with games that are built around a lot of randomnesses, they will wear out their welcome after about half an hour. And Bahamas rides sometimes too close to that line.

The hardest games to review are the ones that aren’t good, aren’t bad… they are just… there. Welcome to the Bahamas. Bahamas does exactly what it sounds like it should. The theme is fun enough and the wonderful artwork from Piero elevates the package to be slightly more than just the sum of its parts. But for experienced gamers, this probably isn’t the one you are dying to have.

If you often find yourself with large groups of casual gamers who would love to shout at each other, Bahamas still certainly fill that role for you and it’s fun enough to play that everyone will have a good time.

Final Score: 3 Stars – A fine casual game, but with a lot of random elements that may last a few minutes too long.

Hits:
• Wonderful theme and artwork.
• Dice drafting mechanism is a neat way to do action selection.

Misses:
• It can take a bit too long to reach its conclusion.
• Randomness on top of randomness. Player agency is minimal.