We review Babel, a hidden role and stacking game published by Big Cat Games. In Babel, players are trying to build a tower 8 stories high, but not every player is who they seem to be. 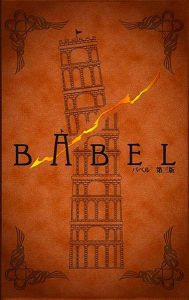 I always found the story of the tower of Babel interesting. Ancient civilizations building a tower to reach the heavens, only to be struck down by God himself. Then again, I tend to love etiologies. Which brings us to today’s review of Babel from indie game publisher Big Cat Games. In Babel, players are working together to build a tower out of cards…yet not everyone is who they appear to be!

Babel is a hidden role and stacking game for 1 to 5 players that takes about 15-20 minutes to play. Babel plays best with 4-5 players.

Babel is a hidden role/traitor game where the majority of players are builders and one or more players might secretly be a fanatic. The builder’s goal is to construct a tower 8 stories high, while the fanatic wants to prevent that. To setup the game, each player is dealt out a hidden role card. There is always one more card then players, so there might not always be a traitor in the game.

On a player’s turn, they choose one of the 3 cards in their hand to play face up on the table. Most cards will represent a wall size (height of 1-5). The rest of the players each secretly choose a card from their hand and play it face down. They are allowed to encourage the active player to choose their card, but can’t reveal what it actually is. Once a card is chosen, the active player must build a level of the tower using the wall height of both cards (IE: a level 3 card and a level 5 card if those were the two cards elected). Ideally, if you are on team builder, you want the wall cards to be as close in size as possible to create a straight tower.

There are two special card types in the game. A thunderbolt card that will remove the top floor and walls, and wall breaker card that will have the active player build the level with only one wall card and floor.

If a fanatic thinks they’ve been found out, they can shout “Babel” and reveal themselves. When they do, the builders need to construct a tower one story higher to win (instead of 8 levels, 9 levels high).

The game ends with a win for the builder if they reach the required tower height, or if the fanatic causes the tower to collapse on their turn. The fanatic wins if the tower collapses on a builder’s turn.

To be honest, hidden role and traitor games isn’t really a genre I seek out very often anymore. This is partially because you usually need a sizable group for them to be any kind of fun (at least 4p), and the games tend to all play out fairly similar. That being said, I do have an unnatural love for dexterity games, so I figured I’d give Babel a shot.

And for the most part, Babel is a pretty fun game—especially for fans of the stacking genre. The cards that make up the tower are fairly thick and work really well. The gameplay definitely brings back memories of playing BGQ favorite Rhino Hero, yet the traitor element definitely adds a new wrinkle to that gameplay.

So let’s talk about being a traitor in Babel. For the most part, it feels like the traitors have a bit of an uphill battle to win. This is mostly because there just isn’t much leeway for a traitor to be subtle. In games like Battlestar Galactica, cards are shuffled once added to a stack, so you don’t know who really played that bad card. With Babel, you know who played what card, so usually if a card is played more than 1 number off, the gig’s up. That means that a fanatic needs to choose the most opportune time for their sabotage. When a 1 is played, getting them to choose your 5 card is ideal.

Which would normally be a solid plan if not for the thunderbolt cards. If you somehow manage to sneak in an unbalanced floor, the builders can undo your work with a well-timed thunderbolt. This leaves an uphill battle for the fanatics. I’m curious if the game would actually play better without those cards, forcing the builders to find offsetting cards to “right the tower”.

Babel does come with a cooperative mode, which requires players to speak in animal sounds (cat, dog, frog etc…) when playing cards. That mode is a bit silly and, frankly, I much prefer the standard gameplay. In fact, games of Babel are way better when there is a traitor trying to sabotage your efforts. If the fanatic card isn’t one of the ones picked, the game is pretty easy to win. Trying to suss out the traitor in Babel is actually a ton of fun, and throwing accusations left and right gives the game a lot of charm.

Is Babel a perfect game? Definitely not. The fanatics seem to have the odds stacked against them and the cooperative mode is forgettable. That being said, just about every player (gamers and non-gamers alike) have all had a ton of fun playing Babel. It’s a game where you’ll see cheers, accusations, and smiles as the tower builds up from your tabletop. In fact, this one can make a great gateway traitor game to introduce the genre to your non-gamer friends thanks to its quick playtime and low rules overhead. While I may try out some house rules in the future (such as limiting the thunderbolt cards), for a quick-playing, dexterity game the embraces the traitor genre, I’ll definitely be reaching for Babel.

Final Score: 3.5 Stars – A dexterity game with a traitor mechanic that can be a lot of fun if you don’t take it too seriously.

Hits:
• Traitor and stacking mechanics match up quite well
• Quick to play, easy to learn
• Solid building pieces
• Rooting out the traitor is quite enjoyable

Misses:
• Too hard for the fanatics to be subtle
• Coop mode is not as fun as the standard gameplay