A couple of weeks ago we announced our nominees for our 9th Annual Board Game Awards. 2021 was a year we started inching back towards normalcy, with conventions returning and some manufacturing challenges clearing up. So, as usual, we are taking one last look back at the year to recognize the best and most creative games released.

Today we are excited to announce the winners of our 2021 Board Game Awards. As usual, the voting was difficult, and some categories were extremely tight. But our editorial staff (along with input from our readers) have made their selections. So, without further ado, here are the winners of our 9th Annual Board Game Quest Awards. Congratulations to all the winners and nominees.

The Initiative
Designer: Corey Konieczka
Unexpected Games
Get Your Copy

The first offering from Unexpected Games was a great one. The Initiative takes players into a comic book story and weaves a game around it. This campaign-style game will have players collecting clues on a board, and using them to slowly reveal letters on a board with hidden doors. It reminds me a bit of Wheel of Fortune where you see part of a puzzle, and have to figure out what the phrase is. For gamers that love working together to solve puzzles, The Initiative is a great experience.

Most Innovative Board Game

Mind MGMT: The Psychic Espionage “Game.”
Designers: Jay Cormier and Sen-Foong Lim
Off the Page Games
Get Your Copy

This game of deduction has players hunting for the recruiter on a city grid. Playing in the standard mode, one player will secretly be moving around the board while trying to recruit assets. The other players will need to put on their deduction caps and work together as they attempt to track down the recruiter player before time runs out. After the game ends, there are over a dozen sealed boxes to open up that add more variety in future games. One of the nice things about Mind MGMT is that it not only plays 1 vs. many, but can be played fully cooperative by using a digitally integrated app.

Runner Up: The Initiative

It can take a lot for a dueling card game to stand out as the genre is not only crowded, but dominated by heavyweights such as Magic: The Gathering and Pokemon. Yet that’s exactly what Radlands did. As the only game to win two awards this year, Radlands shows it has staying power. Radlands has players in control of their own post-apocalyptic settlement, fighting for survival. With water as your main currency, the economy in this game is super tight, leading to a lot of meaningful decisions. Add that to the always stellar production values from Roxley games and you have our Best Two Player Game and Best Card Game as well!

Last year’s Game of the Year winner comes roaring back with a great expansion. Lost Ruins of Arnak: Expedition Leaders hits all the right marks for a board game expansion as it adds variety to the base game without requiring us to relearn how to play. This one not only gives more cards, tokens, guardians, and sites to explore, but also leader powers. Each player now gets to start the game with a unique leader that gives the game just a tiny bit of asymmetry. For fans of the game, this one is not to be missed.

Runner Up: Marvel United: Return of the Sinister Six 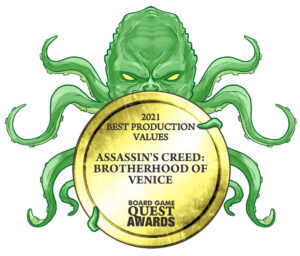 Publisher Triton Noir could have easily taken the massively popular Assassin’s Creed license and used that to sell a mediocre game. Instead, they created a game that’s not only really fun, but looks amazing as well. This giant black box includes tons of miniatures: from heroes to enemies to even buildings. And each scenario is also sealed in its own envelope, letting players explore the narrative as they progress through the campaign. And everything is housed in its own plastic tray, with cheat sheets to let you know where everything goes when you are done. You can tell that a lot of attention to detail went into this great game.

Runner Up: Oath: Chronicles of Empire and Exile

2021 saw the release of Red Raven Games’ most ambitious effort yet, an open-world choose-your-own path cooperative narrative adventure. The story requires multiple campaigns to unfurl the truth about the world your crew has found themselves lost within. As players progress on their trusty ship the Manticore, they discover new quests, characters, and items, not to mention the inhabitants and monsters hidden within the atlas map’s archipelago systems. Featuring unique combat, an evolving story, and many paths to victory, Sleeping Gods brings the sandbox video game experience to the board game table.

Runner Up: Descent: Legends of the Dark

One of the best dungeon crawlers to come out in a while, Chronicles of Drunagor takes players on a journey throughout the kingdom of Daren. While the game is best played as a narrative campaign, it also has options for stand-alone missions. But what helps set the cooperative game apart is its unique action system and wealth of characters for players to control. In addition to being able to unlock new skills and equipment when you level up, players also have the option to multiclass, creating tons of replay value. Speaking of replay, each door even has a QR code that can be scanned to give different contents of a room for subsequent plays! For fans of the dungeon crawler genre, this one is not to be missed.

Runner Up: Dollars to Donuts 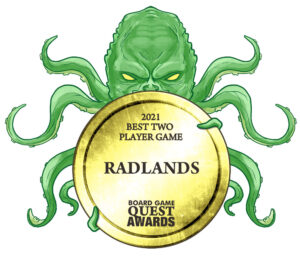 It can take a lot for a dueling card game to stand out as the genre is not only crowded, but dominated by heavyweights such as Magic: The Gathering and Pokemon. Yet that’s exactly what Radlands did. As the only game to win two awards this year, Radlands shows it has staying power. Radlands has players in control of their own post-apocalyptic settlement, fighting for survival. With water as your main currency, the economy in this game is super tight, leading to a lot of meaningful decisions. Add that to the always stellar production values from Roxley games and you have our Best Two Player Game and Best Card Game as well!

Runner Up: That Time You Killed Me

This flip and write game has players building a fortification and wall to defend against aggression from the Picts. In Hadrian’s Wall, players will need to use their workers and resources each round in various ways. There are tons of different tracks players can advance down, each of which provide different benefits. This also allows many paths to victory as players can try out different strategies each time they play. If you are a gamer that likes the type of games where you get to cross off boxes, and chain the benefits you get from that into other bonuses, then Hadrian’s Wall is right up your alley.

In 7 Wonders Architects, game designer Antoine Bauza was able to distill the 7 Wonders experience down into a more newbie friendly package. Kind of like what Ticket to Ride: New York did for the Ticket to Ride experience, 7 Wonder Architects ditches a lot of the original concepts of 7 Wonders in favor of a more streamlined experience. This one is very easy to get to the table, with a super simple ruleset. But while it’s definitely different then the original, it’s still fun to play and has some solid production values.

Oath may very well be the best game you’re not playing. It’s challenging to table, as it requires a consistent gaming group willing to let an immersive world begin to unfold over multiple plays. It has a front-heavy teach and a ruleset that requires plenty of gameplay to master. And honestly, it can be filled with frustration when unable to overcome the odds. Yet all of this begins to even out over time as strategies evolve and chronicles are written. New win conditions and new sites and new denizen cards all emerge to create a dynamic and engaging system if you can dedicate time to its emergent narrative. It is truly a game to build a group around. As Brandon’s gaming group heads into its nineteenth era, they do so with the knowledge of all prior Oath generations that formed the current landscape. Complete with all the grudges, betrayals, and even the camaraderie that shaped its politics and culture.

Note: Per award rules, because it won Game of the Year, Oath: Chronicles of Empire and Exile was removed from consideration from other award categories except Best Production Values.