A few weeks ago we announced the nominees for our 1st Annual Board Game Quest Board Game Awards. We thought it would be fun to take a few minutes and recognize some truly great games that were published last year. Since that time, we’ve been hard at work trying to select at winner in each of the categories. Each member of our editorial staff cast their vote for the winners and we also included you, our faithful readers. Hundreds of you participated in the voting and we were excited to get such great participation. Thanks to everyone who took the time to vote, we hope you had as much fun as we did.

And now, without further ado, here are the winners of our 2013 Board Game Awards. 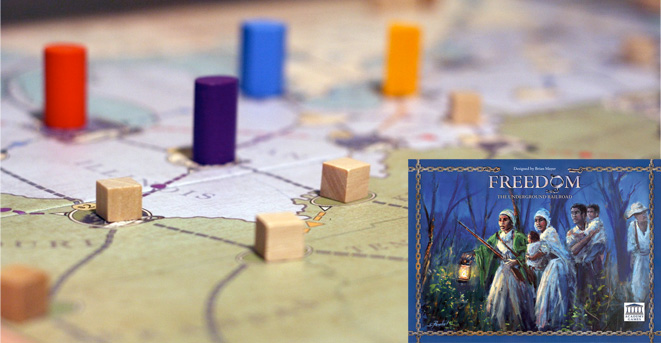 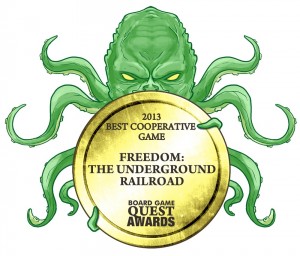 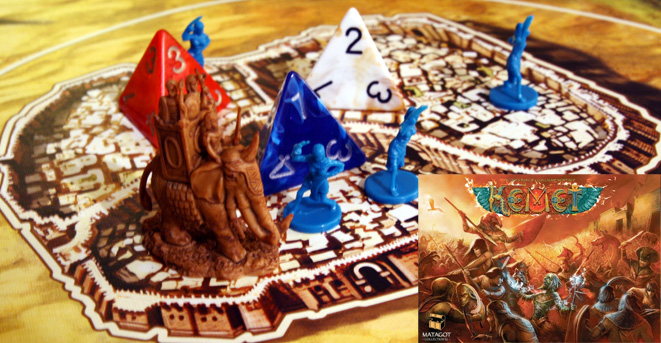 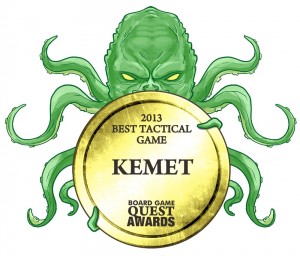 Kemet is not your average war game. Kemet is almost a blend of a euro game and a light war game. The board is setup so that no matter where your city is, you are the exact same amount of spaces away from all of your opponents. This balance, combined with the unique pyramid action system in Kemet, helps it get to the table often. 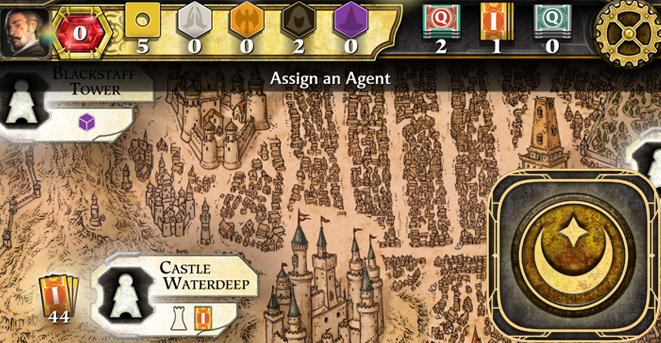 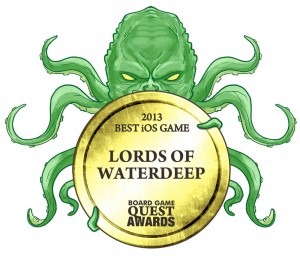 Lords of Waterdeep
Wizards of the Coast
Developer: Playdek
Get Your Copy

Lords of Waterdeep barely nudged out Agricola to claim the crown for the Best iOS Board Game. Tablet gaming has come a long way since the iPad first made its debut in 2010. While digital board games will never replace their tabletop cousins, tablet gaming is great for when you are on the go or just don’t have anyone else around. With Lords of Waterdeep, Playdek made an amazing translation of an already great game. The game runs smoothly, features online play and has some great visuals. 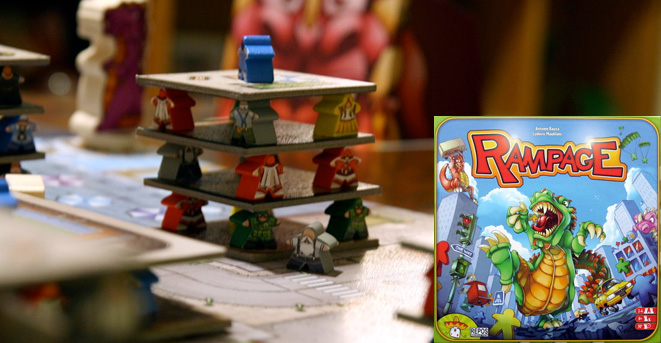 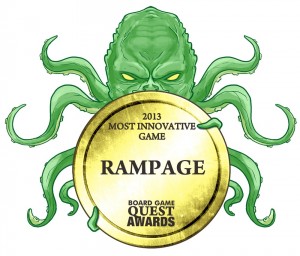 Rampage brought the dexterity genre to the forefront this year with a game that allowed players to indulge their inner child. I’m sure at some point in their lives, everyone has pretended to be a giant monster causing havoc on a city. The designers of Rampage succeeded in creating a game that’s both incredibly fun and completely unique. One play of Rampage and you’ll be hooked. 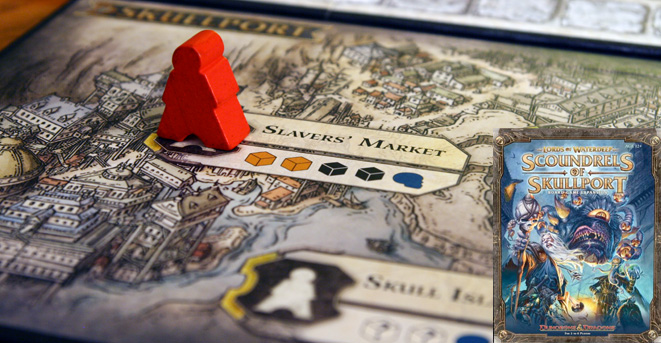 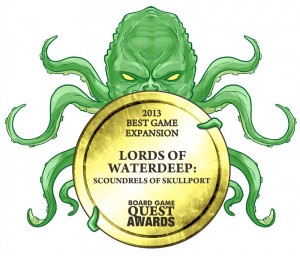 Lords of Waterdeep: Scoundrels of Skullport
Wizards of the Coast
Designer: Chris Dupuis, Peter Lee, Rodney Thompson
Get Your Copy

Lords of Waterdeep was already a fantastic worker placement game. Easy to learn and very accessible, I’ve brought it to my gaming table more times than I can count. Scoundrels of Skullport does want a great game expansion should do, it adds depth and variety to the game without increasing the complexity. Featuring two different modules to use in the game, Scoundrels of Skullport lets you tailor your game experience to your liking. 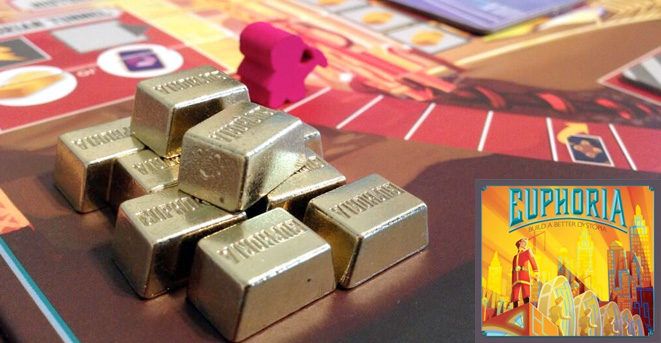 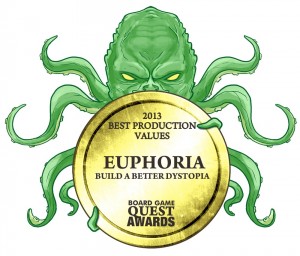 Stonemaier Games second offering showed us that they really know how to put together a game. For people who backed the game on Kickstarter, you were treated to a game that just looked gorgeous. From the thematic artwork to game components made out of realistic materials, Euphoria sets the bar high for other games. Even if you didn’t get in on the Kickstarter, the retail copy of Euphoria is still heads above other games on the market in terms of components.

Runner Up: Caverna: The Cave Farmers 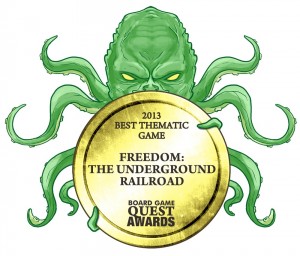 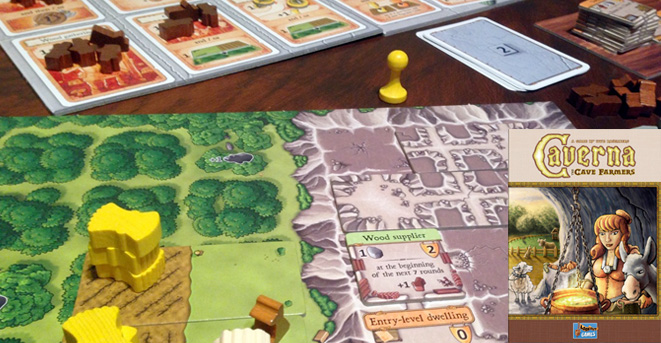 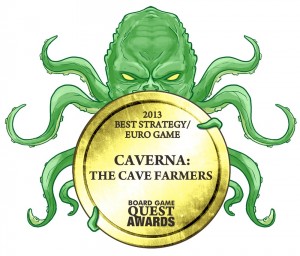 Designer Uwe Rosenberg proved that lightning can strike twice with Caverna: The Cave Farmers. Called by many as a replacement for the popular worker placement game Agricola, Caverna flew off the shelves from the first day it was available (and has a second printing hitting the stores soon). Caverna fixes a lot of issues that people had with Agricola and yet still feels original in its own way. This very heavy box features an almost obscene amount of components that make sure gamers feel like they are getting their money’s worth. 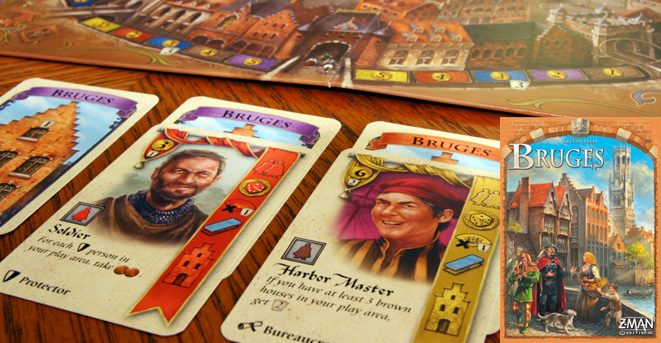 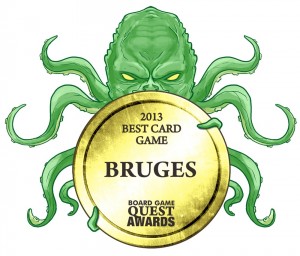 Designer Stefan Feld has almost a cult following in the board game community. He has produced many popular titles from Bora Bora to Amerigo to Macao. This new offering is an addictive card game that has players using their cards in up to 6 different ways. It’s this kind of variety that has given Bruges a lot of life on our gaming table. Creative, easy to learn and a whole lot of fun, Feld did a great job with Bruges. 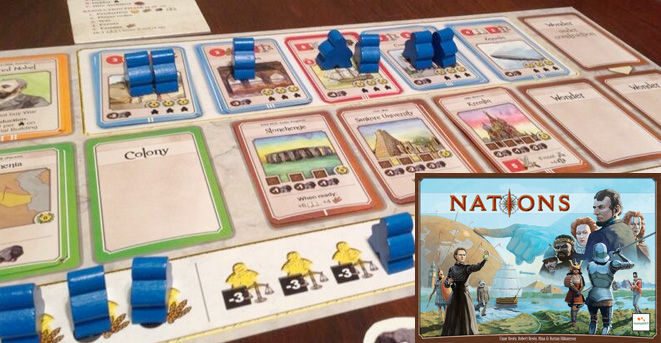 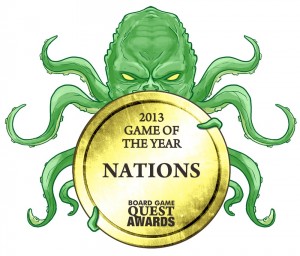 Nations turned out to be an incredibly clever take on the civilization building genre. Completely card driven, players are tasked with building out their nation, creating wonders, winning wars, and trying to maintain the stability of their empire. Nations has a lot of unique concepts at work from the way it handles war between the players to its creative “handicapping” system that can help balance experienced players vs new ones. The game also comes with way more cards than you can ever use in one game which gives the game a lot of replay value. I was surprised at how much I enjoyed Nations and I can’t wait to get it back on my gaming table. Surprisingly easy to learn for an empire building game, I don’t have too many complaints with Nations, a game worthy of our Game of the Year honors.

Runner Up: Caverna: The Cave Farmers

Note: Because it won Game of the Year, Nations was removed from consideration from other award categories.

We want to congratulate all of our winners this year and our nominees as well. We are looking forward to what’s on the horizon for 2014 and we’ll be back here next year for our 2014 Board Game Awards. 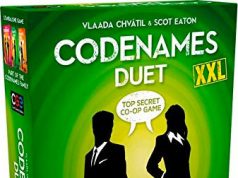 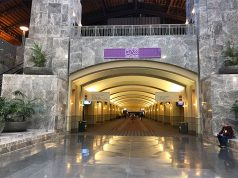 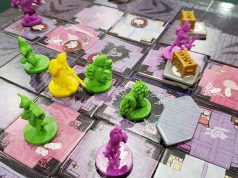