We review Yamatai, a new route building game from Days of Wonder. Designed by veteran game designer Bruno Cathala, Yamatai has players building routes around the archipelago with the goal of earning victory points. 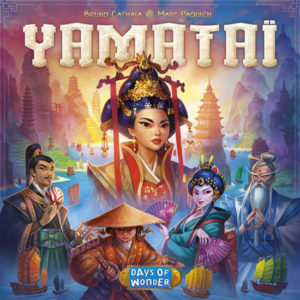 Days of Wonder is one of those companies that I always pay attention to. They don’t release very many games each year, but each new title is always worth taking a look at. From their early accessible games, such as Ticket to Ride and Memoir ’44, to their more recent gamer level games (Five Tribes, Quadropolis), I’ve long been a Days of Wonder fan.

This year, Bruno Cathala and Marc Paquien teamed up to bring us Yamatai. A game set in the Orient that tasks players with building up the capital city with the goal of making it the most prestigious location in the archipelago. While the theme does sound intriguing, this is definitely a euro game through and through. So the real question becomes if the mechanics are interesting enough. Let’s find out.

Yamatai is a route building euro game for 2-4 players that takes about 60 minutes to play. Yamatai plays well at all player counts.

As expected with a Days of Wonder game, the gameplay in Yamatai is easy to wrap your head around. Once the game is setup, games of Yamatai are broken up into a series of rounds, with each player taking a turn based on their position on the turn order track. A player’s turn is made up of the following steps:

Once all players have taken their turn, a cleanup phase happens and play continues. At the end of the game (there are 4 possible endgame conditions), players total up their points from tokens, specialists, buildings, and coins. Most points wins.

For the most part, Days of Wonder has never made a bad game (at least of the ones I’ve played), and Yamatai isn’t going to buck that trend. It’s a solid, middleweight euro game with lots of things for the player to think about.

And that’s one of the things I really like about Yamatai. There are plenty of options for a player to focus on during the game. While there are only four ways to earn victory points, players will be taking many paths to get there. This isn’t really a game where you can focus on one direction, say buildings, and expect to win. Players in Yamatai need to dabble in every area if they hope to successful.

And it’s the player that can build the most effect strategy that’s really going to win. That’s usually from recruiting the right specialists, placing your buildings in the best way, and even choosing the right fleet tiles. Usually, that means finding the right combo of specialists and building placement.

And with so much to do, one might worry that Yamatai is going to get clunky at times. But turns actually flow by really smoothly. Even with six steps, most players’ turns will fly by…once they get going. This is also one area of concern with the game.

Yamatai can definitely be prone to analysis paralysis (AP). Because there are so many things you want to do on your turn, you have a lot to think about. And when you combine this with the fact the that board state changes so much from turn to turn (much like in Five Tribes), then you have a definite slow down each turn as it can be hard to plan ahead.

The other issue that’s nagging me in the thinky part of my brain is that, as good as Yamatai is, it doesn’t really stand out in any one area. Its mechanics are all solid, but many of them you will feel like you’ve seen before. Route building is nothing new, and we were even calling the specialists Genies (a reference to Five Tribes). I think the most standout mechanics has to be the fleet tiles, which I really did like.

Yet my main issue with Yamatai is that it doesn’t really excite me. Other than the occasional specialist with a cool power, most are fairly benign. Constructing buildings is usually just figuring out what you can acquire and place on a turn, and even the fleet tiles are only a means to this end. At the end of the day, Yamatai just struggles to stand out in a crowded eurogame genre.

Finally, I need to talk about the components. Yamatai looks absolutely beautiful, as do all games from Days of Wonder. However, Yamatai is also one of the least colorblind friendly games I’ve seen in a while. I’m not even colorblind and I had a hard time telling some of the boat icons on the building tiles apart from each other. The hues and shades are just too close to each other. There have even been some reports from people with colorblindness that says Yamatai is all but unplayable. So be forewarned if you have an issue with this.

I like Yamatai and I think it’s another solid game from Days of Wonder and Bruno Cathala. This one falls squarely in the middle-weight of the spectrum as it’s pretty easy to learn, but there is still a lot of moving parts during the game. As with most euro games, the theme is pretty much pasted on, so as long as you are OK with that, you can definitely enjoy Yamatai.

That being said, it doesn’t really stand out in any one area and I think it’s going to struggle to excite you as a player. You can’t really plan your turns in advance and watching other players take their turns is far from thrilling. While Yamatai does a lot of things right, there isn’t much here that’s going to make you sit up and take notice.

If you’d like to pick up a copy of Yamatai, it sells for about $60.

Final Score: 3 Stars – A solid middle weight game that, while it can be fun, struggles to make its mark on the genre.

Misses:
• Doesn’t really stand out in any area
• Prone to analysis paralysis
• Not colorblind friendly