We review the worker placement game Trickerion from publisher Mindclash Games. In this heavy eurogame, players take on the role of magicians in the 1800 performing a contest of magics. 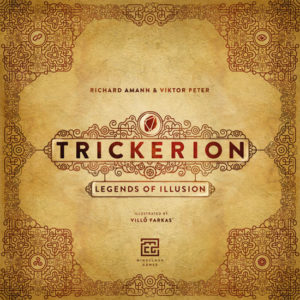 Over the next five weeks, four magicians will be putting on displays of illusion and wonder as they attempt to become the most famous stage artist in the city of Magoria. Using their skill, cunning, and even business acuity, they will be attempting to fill the masses with a sense of wonder. Whomever becomes earns the most fame will be rewarded with the coveted Trickerion Stone.

That’s the theme behind today’s review of Trickerion: Legends of Illusions by Mindclash Games. In this worker placement game, players will be taking on the role of one of four expert magicians, trying to earn fame over the course of the game’s 5 (or 7) rounds. With some fantastic looking components and a lot of depth, Trickerion has much to offer dedicated gamers.

Trickerion: Legends of Illusions is a worker placement and action point game for 2-4 players that takes about 120+ minutes to play. Trickerion plays well at any player count.

In each game of Trickerion, players are trying to earn the most victory points (called Fame in the game). Each round, they will be visiting the games different area to hire assistants, earn money, learn tricks, and buy resources. Eventually they will put on a performance constituting of one or more tricks. Perfuming on the stage will earn players money, trickerion shards and, of course, Fame points. At the end of the game, the player with the most fame wins.

Trickerion is the first game I’ve played from publisher Mindclash Games (not counting the Anachrony Prototype) and I must say, they certainly do a great job putting together a game.

Trickerion is just bursting with components. The entire game is decked out with 1800’s thematic artwork that perfectly matches the game’s theme. Even the dual-sided game board has the victory point track that doubles as the seats in the theater. The game board itself it tricked out to look like a map of the city of Magoria, which has 3 placement locations (or four if you are playing the advanced game).

Each player also gets a player board and a number of tokens (both wooden and cardboard). There are also various decks, tokens, and special cards. To be honest, there are way too many components to list out here, just know that we found zero problems with them and, in fact, found them to be expertly produced.

One of the highlights has to be that each player gets a “Magician’s Workbook”, which lists out every trick card a player can buy, what each action space does, and even has information on the advanced rules. This was a great addition to a game that helps in the learning process.

Speaking of the learning process, you should know going in that Trickerion is a heavy game. It’s not necessarily complicated, but it’s definitely complex. There is a lot going on in this game, so expect the rules explanation to take a bit of time.

I’m going to give a high level overview of the game here, if you want to find out more in-depth, then you can download a PDF of the rules here.

We are going to go over the basic game here (which is where new players should start), and will touch on the advanced game in the next section.

Trickerion is played out over five rounds, and each round has 7 phases:

6. Performance Phase: In weekday order, each player who placed a magician in the theater during phase 5 chooses one performance card and performs ALL the tricks on the card. Even tricks from other players. Each player receives the reward from their tricks (either fame, money, or shards). The player who actually put on the performance will then earn a few bonuses based on if they brought extra workers, any linked tricks, and the bonus listed on the bottom of the performance card.

7. End Phase: A cleanup phase that has players collecting their workers, moving cards, and filling market pre-orders. What’s notable here is that a player has to pay for any worker they used (except their magician token). This will cost either 1 or 2 coins per worker, depending on the type used.

Each round is played out in a similar manner and after five rounds, the player with the most fame wins.

In case you can’t tell from the brief how to play above, Trickerion is a HEAVY game. This isn’t the type of game that you can pull out on a whim at 9:30pm at the end of a game night. It’s a game where you’ll have to budget at least 15-20 minutes to explain the rules to new players. If that kind of game turns you off, then you can probably move on.

But for the rest of you, Trickerion can reward you with its deep, strategic game play. The downside of this depth is that Trickerion has a somewhat lengthy rules explanation. New players are probably going to feel a bit overwhelmed at first. On the plus side, the Magician’s Workbook mentioned in the components will greatly help with not only the explanation, but also to keep the game moving.

If you are a fan of tight worker placement games, then I think you will really enjoy Trickerion. There are four main action areas you can send your worker to and there is always one available spot per player in the game. The key is though, workers use an action point system and some slots give bonus action points.

So it’s not very uncommon for you to want to send a worker to a location (specifically downtown) only to find it doesn’t have enough action points to use any of the spaces because all the bonus slots were already taken. So in that regard, you will need to use both careful planning and also try and guess where your opponents will be going, since space is so limited.

Speaking of workers, Trickerion does balance the game nicely by requiring players to pay for workers when they use them. So my usual strategy of get as many workers as possible right away doesn’t really work well here. More workers mean more choices and actions, but they also want to get paid (the nerve of them, right?). Money in Trickerion can be pretty tight, at least early on, so players will have to gauge the benefit of hiring and using more workers vs saving the money for components, advertising, and fame.

One of the great things about Trickerion is how strategic it is. You need to get new tricks, but to perform them, you need the appropriate components. After you get those, you need to setup your trick, and finally go to the theater to perform them. This all requires a ton of advanced planning and calculation. You’ll also want to figure out the best times to go to each location. It’s possible to learn a new trick, buy the components, set it up, and perform it all in one round (however that does seem to be a bit rare). So for people who love to figure out their actions far in advance, this game will be your baby.

I do have to say that I found the actual performances to be the least thematic part of the game. They are somewhat abstracted into symbol matching and the odd part is that when you go to perform, you are not only performing your own tricks. You pick a card that has at least one of your tricks on it and perform all on that card. Thematically, it doesn’t make much sense. It works fine for game balance, but I found it to be a bit odd.

Trickerion is also a game that has many paths to victory. I’ve seen players rush to the stage to get their VPs up quickly, so then can access the more advanced tricks. I’ve also successfully employed a strategy of just focusing on the basic, cheap tricks to quickly and consistently earn fame points.

Finally, I will say that Trickerion does play better with the advanced version of the game. It adds a whole new location (the dark alley) and also unique powers for each of the game’s characters. This adds some nice diversity to the game and I think players will want to stick with this version after their first play. I would recommend that new players stick with the base version of the game for their first time though as there is a lot to wrap your head around here.

Trickeion was a great first offering from new publisher Mindclash Games. While this heavy, complex game is not going to be for everyone, those who enjoy a meaty, strategic eurogame can have a lot of fun here. There is plenty to sink your teeth into, especially once you dive into the advanced game.

While I wasn’t a big fan of how the game abstracted once you got to the performances, overall I enjoyed Trickerion. However, its lengthy play time and complex rules explanation will probably prevent it from making its way to the table too often. But when Trickerion does make it out, players are rewarded with some fantastic components and a fun take on the worker placement genre.

If you’d like to get a copy of Trickerion, you can pick it up for about $55.

Hits:
• Deep, engaging game play
• Fantastic components
• Both a basic and advanced game for more variety
• Many paths to victory