Board Game Review By::
Tyler Nichols 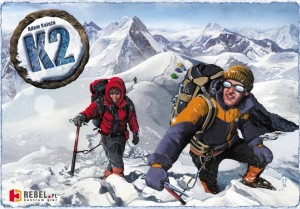 When I look at my bucket list, I realize I have many physically active things I want to do in the future. Traveling Europe, surfing, and walking the Appalachian Trail are just a few of them. But there is one thing you won’t find…reaching the summit of difficult mountain. It’s not that I wouldn’t enjoy the view. I just have little desire to ascend a peak with a low survival rate.

This isn’t the case for Adam Kałuża, who in addition to being a mountain climber designed the game we will be reviewing here. In K2, players will control two mountaineers who are trying to reach the summit of K2, the second largest mountain in the world. Players will have to manage their deck of movement and acclimatization cards to get both pawns as high up the mountain as they can in 18 turns. Is this game worth the climb or should you just stay at base camp? Let’s get to it.

K2 is a hand management game for 1-5 players to play in around an hour. In my experience, the game plays best with 3-5 players.

Players start with their two mountaineers at the base of K2. Each turn will have players playing three cards from their hand. They will either be movement cards to help them ascend or descend to safe spaces on the mountain, or acclimation cards to help them have enough oxygen as they reach the thinner air of the mountain.

During the climb, players will have to deal with extreme weather and other climbers blocking your path as you follow the different routes up the mountain. As the mountaineers go higher and higher up the mountain, they will earn more victory points at the end of the game. The player who manages to get their climbers up the highest and have them survive until the end wins the game.

K2 hits it out of the park in terms of art style for me. Each card type has unique artwork that captures both the beauty and danger of climbing a mountain. I also like how the mountain looks on the game board. It looks to be a formidable opponent as it as it takes up a lot of space on the board. The spaces along the trail are pronounced discs that are quite large. They do take some of the focus off the mountain artwork, but their size makes it easy to see the movement and acclimation cost for that spot.

In my copy of the game, some of the pawns had inconsistent paint applications. This small issue was the only quibble I have with the components. I am a person who loves seeing inventive ways to show information. The iconography on the weather tiles shows the weather effects and what altitude zones were affected in a small amount of space.

Each player is given the identical deck of 18 cards, a player mat to monitor each climber’s acclimation level, and two tent tokens. The board is double-sided and players will need to determine if they want to use the easier or harder route to the peak. Take my advice and use the easy one for most games. Each of the 18 turns in the game is played the same way.

1. Card Selection
Players will select three of the six cards in their hand to play this turn. Once each player is ready, everyone reveals his or her cards.

2. Risk Tokens
Everyone will need to add up the total movements points of the cards they have played. For rope cards, that have different movement depending on if you are going up or down, only the upward movement value is added. The player with the highest total must take one of the face-up risk tokens. These are either 0, 1, or 2 on the tokens and represent restrictions of your movement that turn. You must spend them on movement or acclimatization during the next phase.

3. Action Phase
Starting with the first player, each player will move their climbers, raise acclimatization levels, or place a tent depending on the cards they have played. They must be mindful of the table at each elevation level that shows the max number of players on each space within that zone. Players will also be able to earn victory points by moving higher up the mountain.

4. Acclimatization Checks
Checking each climber separately, players will add or subtract the appropriate number of point by moving the marker on the player’s mat. Certain spots lower on the mountain will add to your climber’s acclimatization while higher up it subtracts. Weather tiles can also have nasty weather that can affect climber’s levels. If anyone’s climber drops to below one, it dies, earns you one victory point and is removed from the board.

After 18 rounds, the player with the highest sum of victory points from their two climbers wins the game, with players who reached the summit first breaking a tie.

My first time through K2 started as a pleasant one. The rules in the game are very simple to learn and teach due to the simple movement mechanics and the main goal of don’t run out of oxygen. This continued for the first six turns or so, until we reached about the midway point of the climb up the mountain. I was looking at my situation and was frozen in fear of what I had foolishly done. I was stuck just below the 8000 meter zone with no way to give myself acclimatization points to survive the bad weather in the forecast. To add to that, I had a slew of other climbers blocking my way back down. It was at that moment that I realized that I had gotten myself into a mess that would be difficult for me to survive. K2 showed itself as a game that has some ferocity.

K2 has the rare distinction of a game that I get personally invested into the outcome. If I play a game filled with armies, I do not care about losing one of my fifteen units. In this game, I worried that my mountaineer pawns won’t make it back alive. I think this happens because I’m responsible for their journey from base camp. I’m not saying I’m crying if I lose one of my climbers, but I worry for their safety as I make my decisions. The game manages to connect players to the theme even if their actions are just selecting cards and choosing how to use them.

Let’s talk about the hand management in this game. With each player having the identical set of cards that they will cycle through twice in the 18 turns of the game, everyone is on even footing to do well. Each round gives you difficult decisions to make on which of the three cards to play and how to split them between your climbers. The game would be challenging enough with dealing with only one climber, but dealing with two causes some analysis paralysis for even the quickest players. Not only do you have to deal with the math problem of getting to pawns up to the summit, you also have weather and the other climbers.

The weather in the game adds some variety to the climbing conditions. There are two sets of tiles representing summer and winter. Summer has mostly sunny days that won’t have any effect on the climbers, while winter is out to get you with most of the days causing you to spend more acclimation points or hinder your climb in certain altitude zones. These tiles with the easy and hard side of the board create four difficulty settings for players to experience. I think the perfect setting is the easy route side of the board with the winter tiles. It adds enough danger without being extremely difficult.

It’s with the weather aspect of the game that I have the biggest gripe. During the game, players will be able to see the forecast for the next few days. This allows you to see when it’s the optimal time to climb. These tiles are randomized each game, so you won’t get the same set of conditions, but during the game there is no variability. Weather is something that changes frequently and forecast can be just flat out wrong. This isn’t addressed in the game and I feel like it would have been an interesting element to make the players hope for the weather to change in their favor.

The other variable you have to deal with is the other player’s mountaineers. The game does a nice job of making the game playable at all player counts by adjusting the number of pawns that can be on each space. In all player counts, they allow for plenty of climbers at the base, but as you ascend they allow fewer and fewer. This leads to situations where you are attempting to go higher or descend and you can’t do it because of other characters blocking spots along the routes. In my experience, this is where a climber will end up running out of acclimatization points because they are not able to get out of a storm. Unless you are the first player that round, you will have to adjust to what the other players do and have to keep that in mind as you decide how to play your cards.

K2 is a game that has found itself into my gateway game rotation. I feel that it teaches the hand management mechanics in a simple and enjoyable way. Players will quickly learn the harshness of the game from the weather and strain over the difficult decisions they must make to keep their climbers alive. While I wish the weather mechanic had some randomness, K2 is extremely well designed.

K2 places a player’s success solely on the choices they make. The game is brutal at its highest difficulty, but players can switch between the four levels to find what works best for them. This allows the game to be enjoyed by all levels of board game enthusiasts.

Final Score: 4.0 Stars – A game that uses hand management mechanic to make you feel the anxiety of climbing a mountain without leaving your home.

Hits:
• High connection with the theme
• Able to teach and play quickly
• Meaningful decision making throughout