We review Beyond Baker Street, the new cooperative board game from publisher Z-Man Games. In this Sherlock Holmes themed game, players must work together to solve the mystery before time runs out. 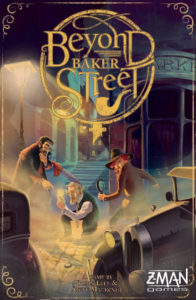 Sherlock Holmes mysteries has always been a great theme for tabletop gaming. The investigative nature of the cases can create a good amount of both player interaction, and also cooperation in games.

Up until now, my go to Sherlock Holmes game has always been Sherlock Holmes Consulting Detective. It’s a somewhat unusual game, but can be fun with the right group. However, there is a new player in town that also thinks you can outsmart Holmes.

Beyond Baker Street is a cooperative game from publisher Z-Man Games (Pandemic: Legacy, Carcassonne) that pits the players in a race to solve a murder before Sherlock does. With some familiar mechanics, this could be a game that will appeal to many players.

In Beyond Baker Street, the players must work together to try to solve a murder. Players will be playing cards into three stacks to try to discover the correct Subject, Motive and also Opportunity. The key is that players won’t know what cards they have in their hand, and must rely on their fellow players to make good use of them.

Beyond Baker Street has only one way to win the game, yet four different ways to lose, so cooperation between players is essential. If you can solve the mystery in time, you’ll walk away with bragging rights over Sherlock Himself.

Overall, Z-Man Games did a nice job with the components of Beyond Baker Street. The game board is illustrated to look like one of those investigation boards you’d see hanging up on the wall in a crime tv show. It features a map of the city, with little red lines running here and there. I thought this was a great touch that really enhanced the flavor of the game.

The cards themselves are of a nice quality, well illustrated and also contain the same thematic touches. Cards will even have thematic text on them to help drive home what they would represent in an actual investigation.

One of the best things about Beyond Baker Street are the character cards, that easily let you scale the difficulty of the game (more on that later). Finally, I liked that Beyond Baker Street had a small footprint and should easily fit in your bag, making it very portable.

Once the game is set up and each player has their starting hand, you’re ready to begin. Note: players may not look at front of their hand of cards. They must hold them outward so only their fellow players can see them.

The game is played in a series of rounds, with each player taking a turn in a clockwise manner.

On a player’s turn, they MUST take 1 action:

Any cards placed in The Impossible will move the investigation marker a number of spaces equal to its value. However, every card added to The Impossible after the max value (1-4 depending on the difficulty level) will move Holmes 1 space forward.

To win, players need to confirm the third and final Lead, and the investigation marker must be on space 20. These both need to happen at the same time.

Beyond Baker Street is probably going to be getting a lot of comparisons to Hanabi, since Beyond Baker Street shares it’s core mechanics (the visible hand of cards) with that game. As usual with our reviews, we try not to dwell too much on game’s that share mechanics, so if you are a Hanabi owner, read on and see if the game feels unique enough to add it to your collection.

One of the great things about Beyond Baker Street is its adjustable difficulty levels. This is accomplished in two ways. The first way is through the case files. There are five different cases you can play, and they each set the starting positions for Holmes and The Impossible. More on this in a minute though.

The best way to scale the difficulty though is through the game’s character cards. Each character gives the player a unique ability to use. The key is that some cards can not only make the game easier for players, but also harder. This is represented by a number of smoking pipes on the bottom of the card. The more pipes, the easier it will make the game. I felt like this was a brilliant addition to the game and it not only allows players to adjust the difficulty level, but adds greatly to the game’s replay value.

Much like most cooperative games, Beyond Baker Street can definitely be a difficult game to win. Players will probably realize going in that the deck is certainly stacked against them. However, the shining light is that this is one of those games that the more you play it with the same people, the more you will probably win. In Beyond Baker Street, there is an art to communicating with your teammates. Sometimes it’s not only what you say, but what you aren’t saying.

For example, if one of my teammates points out a blue card I’m holding, but none of the investigation piles are blue, then I probably would know that it’s a high card and can be easily dumped to move the investigation marker a quite a few spaces down the track. When you can successfully read your teammates, it will create a great atmosphere at the table.

While Beyond Baker Street has a TON of thematic touches, one area that I felt could be done better is with the case cards. The game comes with five of them, but none of them really feel any different thematically. They only serve to select the starting position of Holmes and how many cards The Impossible can hold. I wish that they would have done more to affect the game play on a thematic level. Right now, they just feel pretty generic.

Other than that though, I don’t have too many complaints about Beyond Baker Street. The fact that players don’t know which cards are in their hands definitely helps stop an “alpha player” from taking over the game play. Cooperation is essential in the game if you hope to win.

I also enjoyed all the options players have on their turns. While your natural inclination is to give clues, there are still plenty of other things you can do on your turn. This helps players from rarely having a meaningless turn. More than once I’ve passed on giving a clue when my opponents didn’t have much helpful in their hands, and instead focused on moving the investigation marker. Sometimes they even picked up on that subtle hint and figured out that their hand consisted mostly of useless cards.

Finally, we’ve found that Beyond Baker Street scales very well, having played it with every player count from 2-4. The only change is the amount of cards you have in your hand.

I’m not surprised that I ended up enjoying Beyond Baker Street. The Sherlock Holmes theme seemed like a natural fit for the mechanics introduced in Hanabi, and Beyond Baker Street even manages to kick up the game play to another level. If you every found yourself wishing Hanabi had bit more depth and complexity, then you’ve found it here. I feel like there is definitely room in my collection for both.

Beyond Baker Street takes the Sherlock Holmes themes and runs with it in a game with adjustable difficulty levels, good player scaling, and intense cooperation. If you are a fan of the genre, then Beyond Baker Street is definitely worth checking out.

If you’d like to get a copy of Beyond Baker Street, you can pick it up for about $35.

Final Score: 4 Stars – A great cooperative game with some nice thematic touches that works well in the Sherlock Holmes genre.