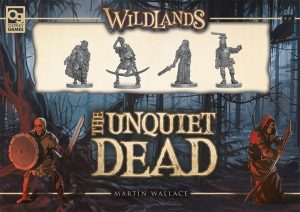 Wildlands was a surprise hit for me this year. I didn’t expect to love a skirmish game designed by veteran Eurogame designer Martian Wallace, but he easily proved he has the chops to do it. If you missed the original review, you can check it out here. But suffice to say, Wildlands is a great entry level skirmish game.

Hot on the heels of the core game release is an explains called The Unquiet Dead. This expansion not only adds a 5th faction to the core game, but also introduces a variant rule. So let’s dive into this expansion and see if it’s worth the add.

The Unquiet Dead is a new faction made up of zombies and skeletons. The game is still played the same with this faction, however, they are unique in that they only have two character symbols and have 6 miniatures. Three miniatures are tied to each character symbol, so one card could potentially activate up to half of your characters. The wrinkle is that you need four character cards to pick up a crystal instead of the usual three.

If you don’t want to play with the Unquiet Dead as a faction, you can play the variant rule “They Wont’s Stay Down”. When any player’s character is eliminated, their miniature is replaced by one of the undead from this faction. Any player can use a knocked out characters card to activate one of the undead figures. However, while you can kill an enemy with the undead, you don’t claim a point for doing so, nor can they claim shards. The undead also provide no points if knocked out (however they won’t defend either).

The core factions of Wildlands were somewhat different, but not quite asymmetrical in my book. The Unquiet Dead really takes things up a notch by giving us a faction that truly feels different from the rest. Having only two different character symbols does provide a lot more variety with your army, yet that’s balanced by the fact that you need 4 cards to pick up a crystal. The Unquiet Dead are also unique in that their wild actions are spread throughout the deck, rather than being on their own dedicated cards.

I’ve found that I liked the flexibility that the Unquiet Dead offered. Even if one of your characters gets taken out quickly, having 3 characters share the same icon means a single loss isn’t going to hurt you too much. Which is good because all your characters have only three hit points, which makes them fairly squishy.

If you don’t feel like playing with the Unquiet Dead as a faction, you can just use the minis in the variant mode. Overall, this mode was fine, but I didn’t feel like it added a ton to the game experience. They work well to use dead cards from your hand, but since you can’t gain points by having them kill an enemy (or collect crystals) their usefulness is fairly minimal. Most of the time I’d rather save the dead cards to pick up a crystal. They are most useful if you think your opponent is about to pick up a crystal and they have a chance to kill them before they do.

The Unquiet Dead is an easy grab for fans of Wildlands. It’s more of the same greatness that makes Wildlands so fun, and almost no extra rules overhead. You can easily toss this faction in the core box (it fits!) and make it a fifth option for players to chose from. Note: this faction doesn’t allow the game to be played with 5 players, it just gives fifth player option to choose from. While the variant mode is nothing to write home about, The Unquiet Dead as a faction are unique enough to make this expansion worth the add if you own the core game of Wildlands.

Hits:
• Most asymmetrical of all the factions
• Easy to pick up with minimal rules overhead
• Can use them as a neutral faction in the game

Misses:
• Can’t use them to add a fifth player
• Variant mode is just OK