We review Tybor the Builder, a card drafting, set collection, and tableau building game published by Lookout Spiel. Tybor the Builder has some connection to the well received Oh My Goods, but is a stand alone game. 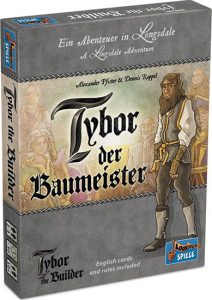 Game publishers can be quite fond of formulae too. Tried and true mechanisms, plus an inoffensive theme, mixed with a well-known designer and artist, and you’ve got some mediocre sales and BoardGameGeek hotness at the least. That’s where this next game comes in.

Alexander Pfister is taking new designer Dennis Rappel under his wing with this effort. Artist Klemenz Franz in all his near-comic character glory makes an appearance too. Lookout Games foots the bill for production. Oh, and throw in a theme like late medieval town building. Get the contracts signed right away!

Tybor the Builder (Tybor der Baumeister in the original German) is a card drafting, tableau-building, and, wait for it, set collection game for 2 to 4 players (plus up to 4 more with a second copy of the game). It plays best with any number.

The main hook with Tybor is that the game has variable game modes with a thematic tie-in to story chapters to influence the end-game scoring. These mostly affect the choices players will make while playing and not so much the gameplay itself.

At its core, Tybor is a straight drafting game much the same way 7 Wonders is. Players will choose a card from their hand, add it to one of two places in their tableau or use it to build a building card from a market row. Other players are doing the same and there’s a little bit of competition for the right cards and symbols. After selecting and playing a card, everyone passes their hand to the next player.

After each round of drafting, players will move on to a new phase and new buildings will be put out. The process begins again but the buildings become more expensive. The main choices hinge around whether to use the drafted card for end game points, as resources to construct buildings, or to discard it to construct a building.

Scoring is accomplished at the end of the game by evaluating the cards set aside for end game and building points. There are some end game objectives from the scenario and a player’s personal objective. Other than that, it’s a pretty straightforward process which makes for very fast games.

Gamers who consider themselves hardcore 7 Wonders fans will laugh at this presentation. This game sits somewhere in complexity between 7 Wonders and Sushi Go!. It has some depth and there are plenty of choices each turn, but the connection to the theme is a pit of despair. This is purely a point building exercise.

It’s not that this is a bad game, it’s just that it’s so unoriginal and unworthy of Mr. Pfister’s efforts. The variable end game point opportunities are meager so any strategy adapting to the scenario mostly doesn’t make a difference. In addition, the scoring opportunities seem to be weighted towards buildings so planning a careful character strategy also seems ineffectual.

Everything else about the game is fine, and that’s about all that can be said. Klemez Franz artwork doesn’t disappoint and the card layout is very well done. The rules are clear and the game plays quick for what it is.

Tybor the Builder is a pedestrian effort from a well-known designer and the softest of softballs in terms of effort. The game plays fine, but in terms of challenge, a nine-year-old design like 7 Wonders is a much better game. There’s a tie-in with Oh My Goods!, also designed by Alexander Pfister, and that may be of interest. However, in terms of money spent, it’s more valuable to go after an expansion to other drafting games.

Final Score: 3 Stars – Players have seen this game before in other drafting games of more storied lineage. The only necessity for this would be the art of Klemenz Franz or having another Alexander Pfister designed title.