We review Trismegistus, a dice drafting and action selection game published by Boards and Dice. In Trismegistus, players are trying to earn the most points over the course of the game by drafting dice and using them for resources. 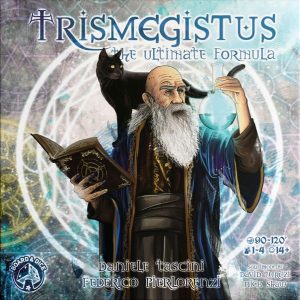 Not every game is easy to learn or teach. 2019 was a year filled with games that sit at or above the medium-heavy level of complexity. These are games with pages rule, lots of components, and a plethora of decisions. These aren’t always the most popular games, but as of now Maracaibo, Barrage, and Pipeline are all climbing as some of the highly regarded games to release before the decade ended.

Trismugistus: The Ultimate Formula is another game that seeks to fit in with the 2019 heavy-weight games. Not only is the name hard to remember and spell, Trismugistus provides the players with several actions to select from that have multiple steps to complete. As alchemists, the players want to transmute raw materials into refined materials to meet the requirements for experiments. It’s a 90-120 minute game that plays 2-4 players but seems to play best with a lower number of players.

The first decision a player will make is drafting a die or picking which resource works best at that moment. Dice come in five varieties (lead, copper, tin, mercury, and iron) with three different colors to choose from (red, black, and white). When a player drafts a die, the potency of the die is the number of that same symbol, like Grand Austria Hotel.

The potency of a die represents the action points that can be used for six different actions. Some are basic, like gaining raw materials that match the symbol of the die, gaining essence based the printed options on the main board, or recharging a used artifact.

Players use the color of the die to purchase artifacts and to transmute, which is the main action of the game. On a player board, there is a line that connects raw materials to refined materials, with those lines matching the different colors of the dice. For a player to transmute a raw material into a refined material, they must match the color of the die and the line, as well as use an essence. Picking which essence is key because whichever essence is used moves the active player up on a track that matches the essence.

A player is locked in to using one die on their own turn, but they may spend reaction tokens on an opponent’s turn to use their chosen die for actions. Once a die’s potency reaches zero, that die locks in on the player board, a new die is drafted on their next turn, and the process repeats. When all the players have three dice locked in, the round is over. Cards are refreshed, artifacts and reaction tokens are recharged, and the dice are rerolled for another round of play.

While the surface of the game is draft a die and use that die, there are many more layers than that. Drafting the right die for the appropriate time is key, and even selecting the wrong color of die may set you back three actions from the rest of the table. Three actions may not sound like a lot, but when that was the result of drafting one of the nine dice chosen in the entire game, it’s a huge hindrance to your performance.

Trismegistus is quite the puzzle. Each action must be considered with quiet thought. A die may have a particular purpose for a player, but even the sequence of the actions must be correct to achieve its full potential. Using free actions for bonuses and completing contracts is essential. When things are as tight they are, being awarded some extra materials, essence, cards, or movement on a track is a huge relief.

This game is 88% a solitaire experience for each player. The actions one player selects on their turn does not dramatically affect the others, outside of taking an experiment or artifact in typical Eurogame form. When players care about the others is the drafting of dice. A player can steal a die that you want, sure. But you still could use that die in limited quantities using the reaction tokens. This also results in adding more players only adding more time.

In terms of weight of the game (board game term, not physical mass), Trismegistus is one of the heaviest games of 2019 I’ve played. Two questions come to mind for how thinky the game is: how long and hard one must think to win, and the proportion of time spent thinking and planning as opposed to resolving actions? Trismegistus is quite prone to analysis paralysis due to the multiple use of dice, low number of actions on a turn, and number of cascading consequences each decision causes.

This is not an easy game to learn either. The rulebook is quite messy, teaching the actions in one section and then detailing the more complex actions in a “further rules” section. The setup is lengthy, numbering 28 individual steps. There were many instances in my first play where I needed to look up a rule (which by the way, speaks to the ease of retaining the game’s information) and had difficulty in finding the section, let alone the actual clarification.

The two biggest places the game commits fouls are the symbology and effort to help the players. Symbols are littered everywhere, and in many cases the same symbols have multiple uses. The most difficult example that players must remember is the special case that mercury is not only a raw material, a refined material, and a symbol on a die, but also an essence that is spent on a player board instead of a token.

Artifacts and experiments have their own set of set of symbols that are all explained on the back of the rulebook. The game does the players no favors in that it comes with a language independent player card that doesn’t describe all the actions. Fortunately, there is a fan-made player sheet that describes actions, free actions, reactions, and scoring. It is criminal that something like this is not included in the box, and while the game gets easier to comprehend with each play, introducing Trismegistus is a chore without a visual guide.

Trismegistus is for a specific type of heavy weight gamer. It’s quite unforgiving and provides almost no opportunities to adapt once committed to a decision. Actions are simple to perform and using free actions can create combos to complete contracts and set you up for later turns. But so much thought goes into each and every turn that it almost feels like work to pick and plan what to do with the die chosen and debate if it really was the right choice. So I’m unsure the fun of Trismegistus outweighs the hard work and thought process for every turn. There is still an audience for this game. I’m just not the person that’d be buying a ticket to that show.

Final Score: 2.5 stars – Hefty decisions on every turn are nice, but so much thought goes into every choice that isn’t helped by a below-average rulebook.

Hits:
• Great use of drafting die based on symbol and color
• Lots of thinking for drafting just nine dice
• Fantastic component quality and art

Misses:
• Messy rules and too concise player aid
• Unforgiving to mistakes
• Much of the game is spent thinking and planning
• Adding more players only add more time
• Essence tracks feel tacked on