We review Barrage, an economic and worker placement game published by Cranio Creations. In Barrage, players are trying to earn points by building dams and creating power. 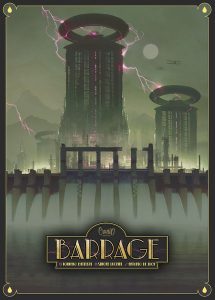 I’ll cut to the chase: Barrage is one of those games that is in the discussion for the best release of 2019. There are many that will continue to get that same talk that are a little more accessible such as Tiny Towns, Watergate, and Wingspan. Barrage is further up on the complexity scale compared to those.

It is not difficult to parse by any means. It is just one of those games where early decisions are going to fuel how a lot of the game is going to progress. First plays of Barrage run between 120 and 150 minutes and plays better with more players, maxing out at four players.

There is a lot to go over when it comes to the rules, so I will keep it as brief as possible. In Barrage, players act as different national companies competing to produce hydropower, scoring points through contracts, producing energy, receiving points from income off of player boards, and end-of-round scoring.

Each player has four types of structures that they will be placing out on the mainboard, which has rivers that flow down from the Alps into basins. Bases act as the first level of the dam, which stops and gathers water in a basin. Elevations are added to Bases so they may hold more water. Conduits act as carriers to get water out of a basin to produce energy and the owning player or the opposition can pay to use the conduit. Powerhouses are where the water flows from the conduit and now produces energy.

The crux of the game’s actions are taken through worker placement. Players can gain new technology, resources, contracts, and money. They can use workers to turn their construction wheel (more on that later), add some new water to the river, and activate a powerhouse. All these are available using one to three workers (and sometimes three credits if desperate for a particular action).

On each player board, there are also four spots for a player to personally place workers to build structures. When selecting what to build, they must place worker(s), have the resources required, and a technology tile that enables the structure to be created. The tile and components are gathered and slotted into the open segment of the construction wheel and turned 60 degrees clockwise. Once those items slotted in make in all the way around to the top, they once again become available to use as opposed to them being spent back to the game’s supply.

Players play five rounds of this, building structures that uncovering symbols that will get them more items for income and even an extra player power.

Barrage is a game of long-term planning. Resources (particularly from the start) are hard to come by, so many of the initial decisions made dictate whether or not you’ll perform well once final scoring is tallied. Most of the time, you’ll spend the first actions getting a building out, but if you build to where you can’t afford the other essential buildings to produce energy, then you’re not doing much for yourself.

Producing at least one energy is something players should be trying to do, even in the first round. Players begin the game with ten points, but if a player doesn’t produce any energy in a round, they will lose three of those points. Players who produce at least six energy are eligible to score the end-of-round bonus tiles. Points come from each of a particular building a player has built, as an example. In addition, the player who produces the most energy each round scores six points and the second most receives two points. As a result, the gap between first and last can be drastic if one player scores a decent amount of energy and the other produces none and takes the penalty.

As an up-front, this game is quite interactive. While the water that is in a player’s dam is essentially owned by them, it’s easy to build a dam higher upstream that will prevent water from flowing down to the opposition. Once in that dam, the water that is siphoned over to the Powerhouse now is in a different river, preventing it from getting to players that were once expecting water to flow down to them. There are also three neutral dams where any player can use the water. Many times there will be multiple players racing to use the water caught in these dams.

These are just examples of interactions on the mainboard. The worker placement is also quite tight. Be thankful that each player has their own places to use for building structures, otherwise, the game would be incredibly cutthroat. As the game is, often there are moments where a player will want to curse when the action they want is taken.

Once concern I’m seeing with continual plays is an imbalance. When starting the game, the last player in turn order picks the first combination of player powers, which means the first player to take a turn is left with the scraps. Some player powers will be used nearly every round, and sometimes multiple times. Other player powers are so situational there might be a single opportunity for it to be halfway useful in the entire game. This might be a situation where certain combinations are definitively better than others. I’m also unsure if taking the first turn is good enough consolation for having the last pick of the player powers.

This is a game where we can’t skip over the Kickstarter woes. When the game shipped to backers, there were a number of component issues. The game’s first batch of construction wheels have a tenancy to lose grip of the technology tiles and resources. I personally had moments where I attempted to turn the wheel with tiles place in it, and by the time I was able to situate the wheel correctly, the three other players had already taken their turns. When the original water drops sit on the board, they are difficult to pick back up. And graphically, it can be a little difficult to determine which region a building spot is on the mainboard without having the Kickstarter-exclusive 3D board.

As it is, I have a copy of the retail edition, which debuted at Essen 2019. The spokes of the wheels now have a cardboard backing to prevent the tiles and resources from scurrying off. And instead of the jewel-shaped water, they’ve gone with wooden water tokens which are much easier to grip. But with both the Kickstarter and retail editions, the wooden resources are confusing to differentiate and the game would have been better off with cubes.

Barrage is a game that has generated much displeasure due to a poorly-run Kickstarter. But once played, those disgruntled opinions of Barrage should fade away. With gameplay that is tight and thinky, Barrage also offers variability due to variable player powers and different set-up each game. While there are flaws (particularly from a component standpoint), they aren’t enough to take away from the fact that Barrage is an incredible design. Huge thumbs up for me and, as of now, my favorite release from 2019.

Final Score: 4.5 Stars – Barrage provides a plethora of interactive decisions that will feel different with each play. 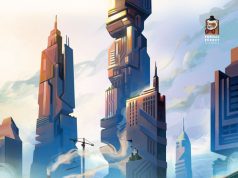 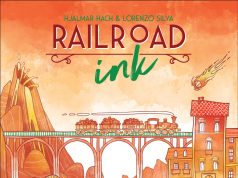 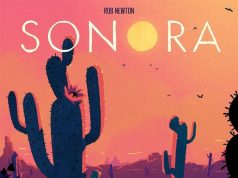