We review designer Richard Garfield's newest game, Treasure Hunter. In this card drafting game, players are competing to see who can earn the most treasure over the games five rounds. 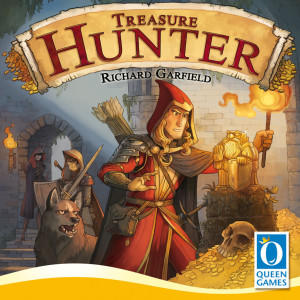 Recently, I’ve felt like we are seeing more and more card drafting games hit the market. Which, if you know me at all, you know I’m 100% OK with that as it’s easily my favorite game mechanic (next to the legacy system).

Treasure Hunter, published by Queen Games, is the newest drafting game to make its way to our tabletop. Fresh off its successful Kickstarter campaign, Treasure Hunter was designed by industry titan Richard Garfield (Magic: The Gathering). Did Mr. Garfield use some of his magic design dust to create an engaging drafting game? Let’s find out.

Treasure Hunter is a card drafting and set collection game for 2-6 players that takes about 40 minutes to play. In our experience, Treasure Hunter plays best with 4 players.

In Treasure Hunter, you are trying to gain the most treasure and coins over the course of the game. Each round, players will have to choose which cards to draft before they set out on their adventure. Cards come in the form of Adventurers, Watch Dogs, Coins, or Action Cards.

Once each player has selected their hand, treasure will be awarded based on the cards that were drafted by each player. You will also need to use your watch dogs to stop those pesky goblins from raiding your camp while you are out on a delve.

Treasure Hunter plays for 5 rounds, after which, the player with the most loot is the winner.

Queen Games know how to make  themselves a nice looking game. Treasure Hunter comes chock full of components with a large deck of cards, piles of treasure tokens, and a dual sided game board.

All the artwork in Treasure Hunter is illustrated in a family friendly style with an almost cartoonish appearance. Given the game’s weight, I’d say this was a good decision as I can easily see Treasure Hunter being played with your family, especially considering it starts at age 8.

The rule book is easy to learn the game from and the game also comes with a large cheat sheet to help explain the intricacies of the action cards. I do wish that they would have provided one of these sheets, one for each player, as learning what the action cards do takes some time and we had to pass our one copy around repeatedly.

To begin the game, all the cards are shuffled to form the draw deck. The Treasure Tokens are shuffled and two are drawn out into each of the games 3 locations (One for Max and one for Min). Finally, 3 goblin tokens are drawn and placed into the camp board.

Each player is then dealt out a hand of 9 cards. In typical card drafting fashion, each player selects one of the cards and passes their hand to the left (or right during even numbered rounds). This process is repeated until all the cards have been chosen.

There are a few different types of cards that may be drafted:

Adventurers: Come in one of three colors and have a value from 1-12.
Dogs: Used for repelling Goblins.
Coins: Earn money at the end of the round.
Action Cards: Do various things like draw extra cards, add or subtract from your adventurer score, or help you avoid the goblins.

Once each player has their hand of cards, each of the three locations are individually evaluated. First, everyone plays their blue adventurer cards (Frosty Mountains) and totals up their value. The player with the highest value gains the item in the Max slot, while the player with the lowest value gains the item in the Min slot. If you are in between the highest and lowest values, you gain nothing.

This process is repeated for the green and red locations.

Then, players play all their dog cards and compare their paw values with those of each of the goblins. Any goblin that is stronger than your dogs, steals some of your coins. The player who played the strongest value of dogs, gets to take the goblin tokens and any coins they stole.

Finally, players can play any coin cards to gain the listed amount. At the end of the round, players may also use scroll tokens they acquired in earlier rounds. These are one time bonuses to give them extra coins based on cards that were played during the round.

At the end of the fifth round, each player totals up the value of all their treasure and coins. The player with the most is the winner.

Treasure Hunter flew under the radar for me, which is surprising, because I’m usually all over new card drafting games. But I’m glad I crossed paths with this Richard Garfield title as I wound up really enjoying it.

I’d put Treasure Hunter in the Light-Medium weight range based on its complexity and play style. It’s definitely more meaty than something like Sushi Go!, yet not on the complexity scale of 7 Wonders. It easily falls in between those games, making it an ideal game to introduce someone to a deeper drafting game after they’ve played a gateway game (such as Sushi Go! or Between Two Cities).

This, combined with the cartoon style artwork helps to make Treasure Hunter a great family game. The rules are easy enough that most younger players should be able to pick up the nuances of the game without too much trouble, especially if they have played one of the afore-mentioned gateway drafting games.

Even though it’s on the lighter side of the spectrum, I think that there is still enough here to appeal to many gamers out there, especially when looking for a game that won’t be a total brain burner.

That’s not to say that Treasure Hunter is easy. Al contraire, as there are actually a lot of hard decisions to make in the game. Two things stick out in my mind as the reason for this. First would be the inclusion of negative treasure. I love how getting the highest score is not always the best option.

Sometimes a -6 value treasure will be dealt out into the max spot. This causes a scramble by the players to either avoid that area all together or compete for the lowest hand. And since only a fraction of the deck is used each round (depending on player count), you really have to play a game of risk tolerance when it comes to card selection.

The other thing that makes Treasure Hunter so intriguing is that there are always so many different needs that you have to draft for. There are three different treasure areas to compete on and many won’t be won with a single card. This forces players to stack their hand at one color, at the expense of others, if they hope to capture that treasure that has their eye.

To go along with that, the goblin attacks were another intriguing design decision. While the natural inclination for players would be to go hard after the treasures they want, those goblins can’t be avoided. Not only will they steal your hard-earned gold, but they are also worth victory points at the end of the game (and more so if you have the relevant bonus treasure).

All this combined gives Treasure Hunter a lot of legs because there are many paths to victory. Players also need to be flexible as sometimes early treasure grabs can help shape your strategy during the game. Not all treasure are simple points. Some are one time use multipliers that can really pay dividends if used at the right time.

Finally, like most card drafting games, Treasure Hunter scales really well. As you get to the higher player counts, the game length doesn’t necessarily increase, but the challenge does. Not only are you not seeing the same hand of cards repeatedly, but there is a much fiercer battle for the treasure. You’ll be getting a lot less treasure at the higher player counts.

This can also have the unfortunate side effect of causing some wild swings in luck for a player if they happen to get lucky with the cards passed to them. Some treasure is definitely better than others, and since you are likely to be getting much less treasure in a 6 player game than a 3, those few rounds when you do capture treasure can really make a difference. And as expected, the 2 player version of the game is less than ideal. I’ve found that card drafting rarely works well with two players, outside of a few specific two player only games (Tides of Time comes to mind).

Treasure Hunter ended up surprising me by being a game that has a really accessible rule set, yet offers enough meaningful decisions to keep even my gamer friends entertained. While it’s not going to replace 7 Wonders as my favorite game of the genre, it’s lighter weight means it still has a place in my collection.

While the game doesn’t play as well at the far ends of its player spectrum, it does play remarkably well at the 3 and 4 player count. If you are looking for a new drafting game to add to your collection, don’t hesitate to check out Treasure Hunter, another great game from the mind of Richard Garfield.

If you’d like to pick up a copy of Treasure Hunter, you can get it for about $40.

Hits:
• Easy to learn rules
• Family Friendly artwork and rules
• Many paths to victory
• Some hard choices during the game

Misses:
• Doesn’t’ play well at the extreme ends of the player count.
• Could use a player aid for each player.