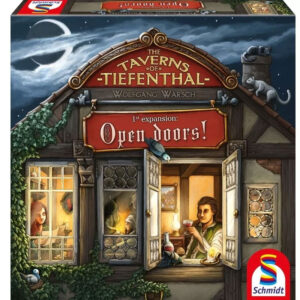 Back in March of 2020 (wow does that feel like a lifetime ago), I reviewed a fun little dice drafting game called The Taverns of Tiefenthal. In it, you are running your own rustic tavern that will have you hiring staff, brewing beer, and attracting customers. While the game was pretty good, it wasn’t without its flaws.

Zip ahead to 2022, and publishers CMYK Games has released the first expansion for The Taverns of Tiefenthal, titled Open Doors. Does this expansion help polish out the core game or just add extra bloat? Let’s find out.

There are four modules that come in the Open Doors expansion and, unlike in the core game, you can mix and match any of these modules as you see fit. The four modules are:

Switching to Wine:
This module added a wine cellar for each player, Sommelier cards that can be hired as staff, and Quack Doctor cards that you can recruit with beer. When drawn, the Sommelier gives you a wine token that basically acts as a wild die for placement. The Quack Doctor, when played, either gives you a coin or can be returned to the supply to duplicate an action you’ve taken this turn.

One Room Please:
Probably the biggest module of this expansion, as it adds a guest room board for your tavern. When you first draw a Noble in the round, you can have her stay in one of your four guest rooms. If later, during dice drafting, you choose a die matching her room number, you gain a bonus. These range from upgrading cards, to gaining beer and coin, to moving on the monastery track. The module also comes with a priest card that you start the game with, which can move you ahead on the monastery track when a die is placed.

The Life of a Bartender:
This gives each player a unique power to use during the game. There are eight different ones in total.

The Mayor’s Visit:
This adds a public goal board for the players. Each game there will be 3 (out of 12) goal cards matched with 3 reward cards. When you accomplish a goal, you get to use a one-time use reward. Once you’ve completed all goals, you earn the Mayor card for your tavern. She gives you a free upgrade when acquired and when played into your tavern, and earns you coins equal to the die placed on there.

I’m not sure I’d call The Taverns of Tiefenthal a complicated game. Yet there are also a lot of little rules that you have to be aware of. It’s one of those games that after you play it, things click pretty well. But getting there can take time as you try and wrap your head around all the bits you need to be aware of. So I was a little apprehensive about adding more content to the game. I always play with all the modules, so do I really need four more?

The answer is yes, yes I do. In fact, I think the modules in this expansion are easier to incorporate into the base game than the core ones. Most of them are pretty straightforward, but the nice thing is you can simply pick the ones you want to use.

My favorites have to be the wine module and the guest room. The wine is really easy to add. When a Sommelier card comes up, you get a wine cube, which can be a die of any number. Easy peasy. Despite coming with this module, the quack doctor is really unrelated to it, so you can use him irrespective of if you are using the wine parts or not.

The guest module was great though. While it’s probably one of the more complex ones from this expansion, I really like what it does—which is to give you an alternative use for your Nobles. Now, when drawing a Noble, you don’t have to complain about them taking up a table in your tavern that round. The first Noble you draw in a round goes into one of your four guest rooms. Then, if their number comes up, you get their bonus. What’s great though is that the Noble doesn’t use up that die. So if they are in the 4 room and you draft a 4, you get that power without having to spend the die.

The bartender module is an easy add because it has almost no overhead. It just gives everyone a unique power. I have people in my gaming group that don’t like asymmetry in their euro games, so they weren’t fan of this, but I was. The bartenders do things like give you discounts on purchasing guests or staff, letting you have upgraded guest books or reputation tracks, or earning you extra income from guests.

I’d describe the final module as… fine? It’s not bad by any stretch, but we didn’t love it either. The hardest part is that Taverns is already a bit of a table hog and this just takes up a lot more space. One of our players also commented, “I could barely see the goals across the table, so I mostly just forgot about them.” There isn’t really a good way to do this kind of chart in the game. It might have been better to deal out each person a goal card instead of having this big chart. I’ll probably keep playing with that module, although it’s my least favorite of the batch.

Finally, I do want to make a comment on the monastery track. One of my gripes with the core game was that it was just too much of a pain to work your way around the monastery track for the rewards you got. Thankfully the expansion addresses that a little. Now, you not only start with a priest card in your deck (who can advance you on that track), but one of the rooms in your guest room can also advance you.

The Open Doors expansion for The Taverns of Tiefenthal was a great addition in my book. It adds four easy-to-incorporate modules that can either all be used or mix and matched. In fact, if the core game modules were a bit much for your preference, then you can actually skip all of those and just use the ones from Open Doors if you want some variety with minimal overhead.

If you are a fan of The Taverns of Tiefenthal, then this is a great addition to your collection. If you didn’t enjoy the core game, this could potentially change your mind, depending on what your objections were to the game.

Hits:
• Expansion modules can be used independently
• Some are really easy to incorporate
• Hurray for alternate use of the nobles
• Monastery track is a bit easier to advance on

Misses:
• Goal board is a bit too hard to see across the table
• Even more of a table hog now