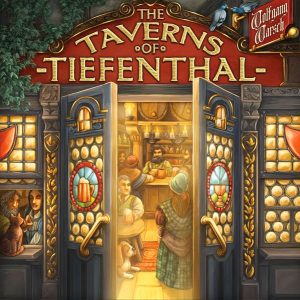 At some time or another, I’m sure just about everyone has daydreamed about running their own tavern. Whether you wanted to be Sam Malone from Cheers or Guinan serving synthahol in Ten Forward, there is something alluring about running your own gathering space of drinks and socialization.

Well today you get to live that dream (kind of) as we look at The Taverns of Tiefenthal from Northstar Games. This is an engine-building and dice drafting game that will have you recruit patrons and upgrading your tavern in the hopes of being the most prestigious watering hole in town.

Games of The Taverns of Tiefenthal are played over 8 rounds, each of which is divided up into 7 phases (don’t worry, it’s not that complex).

Each round starts with you drawing cards from your draw deck and placing them into your tavern. Patrons go to tables and staff head to their various jobs around the board. You stop drawing cards once all of your tables are full.

Next, all players roll four white dice and then choose one to keep. The remaining are passed to the player next to them. From these three another is drafted and the rest are passed. This is repeated until each player has four dice.

Finally, in turn order, each player uses their dice to activate areas around their Tavern that have a matching value. Dice spent on patron cards earn doubloons, while dice spent in staff areas usually earn beer. Doubloons are spent upgrading your tavern, while beer is spent recruiting new patron cards for your deck.

Once all players have spent their dice, cards are wiped from all taverns and put in player’s discard piles and the next round begins. After 8 rounds, players count up their victory points (from cards bought) and the player with the most points wins.

The base game of The Taverns of Tiefenthal is fairly easy to learn. Even though the rulebook somewhat tries to overcomplicate things by making the steps overly verbose, the general gist of the game is easy to pick up. Draw cards until you fill your tables, roll dice, use them to get stuff. Easy peasy. The downside is that the base game is just OK and almost feels a tad bland. However, not all is lost as the game also comes with 5 different expansion modules!

The five modules are meant to be added in sequentially (you shouldn’t play module 3 without module 1 and 2) and actually add a lot to the game. I’m not going to go into detail on all of them, but they do things like add a 3rd currency (schnapps), encourage more balanced production between beer and money, and make recruiting guests more attractive with a guest register that provides bonuses.

Frankly, while the modules do add a bit more overhead, they are generally not that hard to add in. I threw all five in with our first playthrough and no one had a hard time learning the game. If your group is a regular gaming group that has played deck or engine building games before, you can most likely jump into the deep end without many issues.

While I like playing the game with all the different modules, I’m not sure I enjoy them all equally. The entertainers that use schnapps to power special abilities are great and provide some much-needed flexibility in the game. Yet the reputation track feels kind of like a ham fisted way to force evenness on your production. So your mileage may vary on these. There is also a monastery track that almost feels unnecessary in the game. In most of our plays, it was ignored by everyone unless you happened to have an extra, matching die to use.

The best thing that The Taverns of Tiefenthal has going for it is how enjoyable it is to watch your tavern come to life. The first few rounds are going to be kind of ho hum as you don’t have much money or staff. You’ll maybe recruit once here or build there, but that’s about it. But by the later rounds, you have extra patrons, tables, some staff, and even some upgraded equipment. This is where your engine can poetically take off, and when it works, it’s a ton of fun.

However, I said potentially because, unfortunately, The Taverns of Tiefenthal is also a bit prone to swings of luck. Between drawing from your card deck and the rolls of the dice, your engine can grind to a halt if you don’t draw the right cards or the dice are all numbers you can’t really use. The game tries to give you few ways here and there to handle the luck of the draw, but never really goes far enough. Too many times I’ve wasted a round doing not much of anything because I drew all starter cards and none of the dice passed were useful. And in a game with only 8 rounds, that can be a killer.

Finally, I think the production values in The Taverns of Tiefenthal were pretty solid. Your tavern board has tons of spaces that will let your tiles fit in, flip over, or sit on top. All of the art matches up, so the guy sitting at the bar is actually sitting at your bar. While sure, the theme is somewhat loose here, the artwork and components do a lot to bring things together, so that’s a big plus.

Despite my gripes, I still really enjoyed playing The Taverns of Tiefenthal and I think it is a better game with the modules than without. However, I liked some of them more than others so I wish they could stand on their own instead of depending on each other. The only thing that’s really holding me back from rating The Taverns of Tiefenthal higher is the heavy dose of luck in the game and the lack of ways to mitigate it. Sometimes the player agency is just not there, no matter how many upgrades or staff you have to help you out, which is a shame. Yet when the dice go your way, The Taverns of Tiefenthal is a ton of fun.

Final Score: 3.5 Stars – A game with a lot of great ideas and some nice visuals, but is just a little too dependent on luck.

Misses:
• Game can be prone to swings of luck
• Not all the expansion modules feel as thought out as they could be