We review Super-Skill Pinball Holiday Special from WizKids Games. This new version of this popular roll and write includes three new tables for players to try, all themed around popular holiday movies. 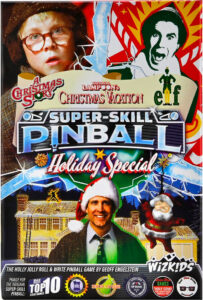 September 10th, 2020
Tony: There is a new roll and write based on pinball called Super-Skill Pinball 4-Cade. Do you want to review it?
Me: Yes!

November 18th, 2021
Tony: There is a sequel to Super-Skill Pinball. Do you want to review it?
Me: Of course!

July 2nd, 2022
Tony: There is a new Super-Skill Pinball using the Star Trek IP. Do you want to review it?
Me: Star Trek??? No. Call me when they have a real IP, like Star Wars, Marvel, or 3 random Christmas movies.

One Month Later
Tony: What are your three favorite Christmas movies?
Me: You have GOT to be kidding me….

That is the true story of how I received my copy of the Super-Skill Pinball Holiday Special.

Super-Skill Pinball Holiday Special, a standalone sequel to the aforementioned Super-Skill Pinball games, is a roll and write pinball game that allows one to four players to compete for the highest score. Games can take between 30 to 75 minutes, with higher player counts taking longer.

All play is simultaneous, and all players use the same dice roll. If a player loses a ball, they start their next round. In other words, players can be on different rounds, depending on their decisions (and luck). A player’s game ends after they have lost two or three balls, depending on the table. The game ends when everyone has lost two or three balls. As always, the player with the highest score is declared the winner!

I want to focus my game experience on the three new tables included in Super-Skill Pinball Holiday Special. To see how the game plays please read my original review.

My tables, in order from most to least favorite, are Christmas Vacation, A Christmas Story, and Elf.

While this is my second favorite of the three movies, it was my favorite table. Yes, it only lasts one round, but it has the most going on and some fun tie-ins to the movie.

The primary way to score big points is by scoring the light bonus. Just like in the movie, the goal is to put so many lights on your house that you cause a rolling brownout. Because you only have one ball, timing when to score your lights (tracked on the backglass and erased once scored) versus building up the bonus is crucial.

Another way to score points is through the multiball bonus. Unlike the other two tables, the multiball in Christmas Vacation is triggered by completing the SQUIRREL set, which can be triggered multiple times in a game, instead of via one-time bonuses.

I also love the tie-in to Cousin Eddie’s explosion that allows you to take an immediate double-score bonus, up to three times a game, for completing the GAS set.

Finally, I really enjoyed the Boss Bonus which, instead of being tied to your choices, increases every time doubles are rolled. Trying to complete the BOSS set before another pair of doubles show up, potentially resetting the bonus back to 1 point, can be fun/infuriating.

The best Christmas movie of the bunch; however, is only the second-best table.

The backglass is more active as it includes both the Santa Visit bumpers as well as the tracker for your Air Rifle bonus. Unfortunately, at least for my copy, the table does not line up perfectly with the backglass, making me want to shoot my eye out…..sorry.

I also really loved the Air Rifle Bonus. There are 8 different sets that can be completed. Each time one is completed, you mark it off. If you complete all 8 before the end of the game, you get a 25-point bonus. You can also complete it at end game by having the last roll be less than or equal to the number of targets, but that’s not as cool.

Obviously, these sets cover famous scenes from the movie, like the decoder ring, the leg lamp, and the BB gun (these grant one-time double-score opportunities and are fun to try to time).

Finally, the DARE set allows you to gamble points. Once you complete the set, you pick Single, Double, or Triple Dog Dare. On the next roll, if the roll is higher than the increasing requirement based on the dare selected, you can score bonus points (no, you cannot nudge to improve your roll).

While I enjoy Elf, it is both my least favorite of the movies AND the tables.

This is the most basic table and is meant for beginners in the game. There are no complicated bonuses to figure out outside of timing when to trigger multiball, but that can be said for every table. It consists of bumpers and sets to complete, of course, all tied to the movie.

The exception to this is that the NICE and NAUGHTY sets impact the scoring of the Clausometer bonus. When completed, besides granting the usual one-time bonus, the NICE set allows you to score the next tier on the Clausometer, while NAUGHTY makes you take a step back. Balancing when to complete these two sets is the most interesting aspect of Elf.

Overall, I continue to enjoy the Super-Skill Pinball series; however, I do have three concerns specifically with this game.

First, while my complaint about higher player counts has been partially mitigated by reducing the number of rounds, it still exists. I still do not find this game as fun at player counts higher than two.

My second concern, which is the nature of the game and cannot really be addressed, is that the game ends at different times for each player. With four players, three people will be waiting while the last player completes their game. This existed in the previous games and it exists here; however, the reduction in rounds does help.

Lastly, there are only three tables included in the game. Yes, the MSRP is lower ($19.99 vs. $24.99), but you still get less bang for the buck. Stupid inflation (and IP license costs).

I am a sucker for Christmas movies. I can picture breaking this out every Thanksgiving and playing games each weekend until Christmas while watching the movie in the background. I really enjoyed Super-Skill Pinball-Holiday Special’s three new tables. The game still travels well, so it is perfect to take on a (Christmas) vacation.

Final Score:  3.5 Stars – An excellent roll and write with IP I love; however, I wish there were four tables like all other releases

Hits:
• Very thematic and true to each IP
• Easy to teach, plays fast solo or at two players with little downtime
• I still love the Nudge and Multiball mechanisms
• Still travels well

Misses:
• One less table compared to the other three releases
• Higher player counts are not as fun (but more fun than in previous releases)
• Waiting for the last player to finish