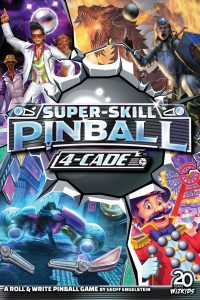 Growing up, arcades were my home away from home. My friends and I would go to play the newest releases, from Cyberball 2072 to Super Street Fighter II Turbo (I THINK I included all the adjectives…). But I wasn’t there to only play video games. I also enjoyed playing pinball. I loved the bells and whistles, the tactile feel of the table and the ball bouncing off bumpers, as well as trying to best my friend’s high score.

I present to you: Super-Skill Pinball 4-Cade!

Super-Skill Pinball 4-Cade is a roll and write pinball game that allows one to four pinheads (slang for a pinball connoisseur) to compete for the highest score. Depending on player count, games can take between 30 to 75 minutes (more on this later). For this review, I played games with all the different player counts.

All play is simultaneous, and all players use the same dice roll. If a player loses a ball, they start their next round. In other words, players can be on different rounds, depending on their decisions (and luck). A player’s game ends after they have lost three balls.  The game ends when everyone has lost three balls. The player with the highest score is crowned Pinball Champion!

Honestly, I am not a big fan of roll and writes; however, I do like thematic games and, as mentioned previously, pinball. I was willing to give Super-Skill Pinball a chance and was pleasantly surprised at how much I enjoyed it.

The game is simple to teach. After the two dice are rolled, you move the ball to the next zone where the number of the die you selected is available, then score points if appropriate. If there are no unfilled boxes available, the ball moves to the next zone, until it can either stop at a box or it moves to the bottom of the board, ending your round. It really is that easy!

Super-Skill Pinball is also VERY thematic. It simulates many of the staples of pinball: flippers, bumpers, spinners, and alleys, just to name a few. These gameplay elements are called features. Each feature has single or multiple boxes to cross off and score. Some are grouped in sets, and when all the features of a set are completed, a bonus is granted, like a score multiplier, bonus points, or multiball, just like in pinball. The game simulates the descent of the ball down a table by dividing the table into zones. When it reaches the bottom zone, flippers are used to send the ball back to the top of the table, and the cycle repeats.

This would be boring if this was all you did; however, trying to decide where to place the ball creates the risks and rewards that gamers want. Should you continue cycling through the bumpers, or let the ball drop to the next zone to complete a set? Should you use the outlane and end the round, guaranteeing you six points or should you risk hitting the final bumper, knowing that if you don’t get the right number, you will not get any points?

Luckily, there is some luck mitigation. Remember that two dice are rolled, so you get two chances for the number you need. But nudging, a very important real-life pinball skill, is simulated in this game. It allows you to adjust a die roll for your table only, at the risk of tilting and automatically ending the round on the next roll. I LOVED this element and felt that its design was perfect for this game!

But what makes the game shine are the four tables and their significantly different scoring opportunities and strategies. The design of these four tables are excellent! Carniball, the easiest table, is a great introduction to the game. There are not many tough decisions to be made, but it teaches the flow of the game, how the features and bonuses work, including multiball, my FAVORITE pinball bonus. It adds a second ball to the table, crowding the table because only one ball is allowed at each feature but doubling your points while both balls are active. Sorry, I got distracted. For me, multiball is like squirrels for Dug.

The next two tables, Cyberhack (think Netrunner) and Dragonslayer (be a Dungeons & Dragon Wizard), ramp up the difficulty and introduce board gaming elements to the game. I was very apprehensive about this when I graduated to these tables. I wanted more complex pinball tables, not a pinball table with tacked on board game elements. Boy was I wrong. I can tell you that I thoroughly enjoyed both tables, be it the hacking minigame in Cyberhack, or the leveling up and casting spells in Dragonslayer. I am honestly looking forward to future tables designed with this hybrid design.

The final table, Dance Fever (70’s Disco), does not include any non-pinball elements, but provides the most complexity in terms of juggling bonuses and decisions with how to move your ball around the table. It was another home run for me.

So, my one and only complaint is that I did not find it as fun at player counts higher than two. The problem is twofold. First, the more players you have, the incrementally longer the game lasts. Instead of waiting for one other person, you are waiting for two to three. This may not sound like much, but you will roll the dice MANY times during the game, extending the game an additional 15 to 30 minutes, especially on the more complex tables. The second issue is that the game ends at different times for each player. With four players, three people will be waiting while the last player completes their game. That makes this game best for either capping off a game night or as the one game you play that evening.

Hits:
• Very thematic!
• Easy to teach, plays fast solo or at two players with little downtime.
• Excellent increase in complexity (and options) with the included four tables.
• I loved the Nudge and Multiball mechanisms
• Travels well

Misses:
• Three or four players can extend the length of the game beyond its welcome.
• Player elimination and waiting for the last player to finish.