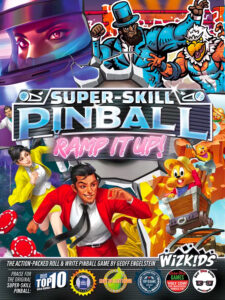 That being said, I was PLEASANTLY surprised when I learned that my favorite roll and write from 2020, Super-Skill Pinball 4-Cade, has a sequel!

I asked Tony if I could review it. He said no because he is a curmudgeon.

I sweetened the pot by telling him I would not mention him in my intro. He still refused to grant me the review.

I had to pull out all the stops, so I offered him a Team Jacob t-shirt.

Let my review of Super-Skill Pinball Ramp it Up BEGIN!

Super-Skill Pinball Ramp it Up, a standalone sequel to Super-Skill Pinball, is a roll and write pinball game that allows one to four players to compete for the highest score. Games can take between 30 to 75 minutes, with higher player counts taking longer.

All play is simultaneous, and all players use the same dice roll. If a player loses a ball, they start their next round. In other words, players can be on different rounds, depending on their decisions (and luck). A player’s game ends after they have lost three balls. The game ends when everyone has lost two or three balls. The player with the highest score is declared the winner!

I want to focus my game experience on the four new tables in Super-Skill Pinball Ramp it Up. To see how the game plays please read my original review.

Before I get to the tables, there are several changes from the base game. First, spinners have been removed. Theses caused some fringe questions in the original, and, given the overall increase in table complexity, I think the designer did the right thing in removing them. Second, the bumper bonus no longer allows you to pick the direction your ball goes. You are forced to go clockwise, be it under normal or bonus conditions. Finally, one table only lasts two rounds, one table allows 2v2 pinball, one table allows you to go above six and EVERY table now has interactive elements on the backglass!

The tables, in order from most to least favorite, are High Roller Heist, Top Speed, Gofer Gold, and Pin Pals.

High Roller Heist – this is a moderate difficulty table influenced by Ocean’s Eleven. You hire your crew, break into the casino, vault, or mint, and rob….err, score, many points. I love the casino, vault, and mint mini games on the backglass, two of which have their own flipper. These three games are your way to a high score but scoring BIG points will be difficult… unless you hire help. Hiring individuals for your crew is another awesome mechanism. They add six more bonuses to the table on top of the ten normally included on an intermediate table. This adds the flexibility and challenge I am looking for as you try to hire the right crew member for the mini game you want to pursue. Finally, the pressure is really on as you only have TWO balls for this table, not the usual three. One unlucky tilt could end your game early!

This is my favorite new table because all these design ideas fit well together. Oh yeah, I almost forgot. You will hate the guard that moves every time you score 10 points. You REALLY don’t want to end up in jail…

Top Speed – this is the advanced difficulty table based on, shockingly, racing cars. This table allows you to increase your die as high as a nine. There is a gas and break scoop that allow you to modify your car’s speed, which in turn adjust the die value. These higher die values are needed to reach the Nitro Zone or the Test Track, my favorite mechanism on this table. You try to complete laps without spinning out (having a die roll that keeps you in the Test Track). It is this type of push your luck aspect that makes this game so enjoyable. Finally, the bumpers on this table award Skill Shots as well as points and all bonuses are erased at the start of each round, allowing you to use these bonuses more than once per game. Combine all of this together and you have my second favorite table.

Gofer Gold – the easy difficulty table, this is based on a Gofer (mining) Gold. Duh. I like this table because it is simple, so it is a good starting point for new players; however, it has a bit more “umph” to it compared to the easy table from the original, so it is still fun for veterans. The main draw is its utilization of the backglass for the Flume Loop/Lost Mine/The Falls minigame. This will introduce players to the press your luck aspect (you must complete 5 revolutions around the flume loop to maximize points, then hit three carts in order) without being overly complicated. There are also only eight bonuses in this game, so there is less for players to consider. This table is not as involved as the others, but it has its place and, honestly, I don’t want to brain burn Heist or Top Speed every time I play. Sometimes I just want to Gofer Gold.

Pin Pals – the other moderate difficulty table, this is based on tag team wrestling. The ONLY reason this is my least favorite is I haven’t played this at four players because I don’t want to play this game at four players (see below). The design is great for people who think they would enjoy this. Two players team up, each with their own table, sending bonuses to each other through various pinball happenings, such bumping the Ref or Tagging. There is also a cage that you can go in and, if your teammate is in at the same time, you double your bumper scores in the cage.

All that being said, my wife and I play this as a coop. We play as a team and compete against our previous high scores. This way we can enjoy the design but not have to wait for two other people to finish their turn!

To wrap up my review, my only complaint from the original still stands. I do not find this game as fun at player counts higher than two. The problem is twofold. First, the more players you have, the incrementally longer the game lasts. Instead of waiting for one other person, you are waiting on two to three. This may not sound like much, but you will roll the dice MANY times during the game, extending the game an additional 15 to 30 minutes, especially on the more complex tables. The second issue is that the game ends at different times for each player. With four players, three people will be waiting while the last player completes their game.

Like its predecessor, Super-Skill Pinball Ramp it Up is a keeper for me. I enjoyed the four new tables, the two new formats, and the different strategies each table required. It still travels well, so it is the perfect game to take on vacation. I love to break this out as a solo game or to play with my wife. If you are new to this franchise, and both the original and Ramp It Up are available, I would steer you towards the original. If you liked the original and are looking for more tables, I highly recommend you buy Super-Skill Pinball Ramp it Up. You will not be disappointed!

Final Score: 4 Stars – Now I can call this my favorite roll and write franchise!

Misses:
• Three or four players can extend the length of the game beyond its welcome
• Player elimination and waiting for the last player to finish
• More complex tables are not as good an entry point for new players