We review the Stranger Things Dungeons and Dragons Starter Set. Published by Wizards of the Coast, this is a well-organized starter set that will allow new players to get a good grasp of D&D basics and includes elements from the Stranger Things series. 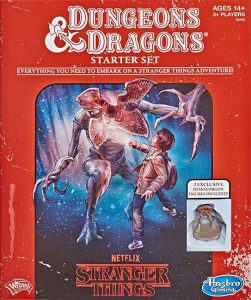 Stranger Things season 3 released on July 4 and as timing would have it, BGQ was provided with a Stranger Things Dungeons & Dragons Roleplaying Game Starter Set (STD&D) to review last month. Now, let’s hope two words don’t sum up this starter set: “money grab.” This popular show brings the 80s back and, like many of my age group, Stranger Things has tons of nostalgia and WOTC tries to add some of their own by placing this set into the classic red box to mirror the Basic D&D set that my generation cut their teeth on. Overall STD&D is part Dungeon Master’s Guide, Player’s Handbook, and Monster Manual and comes with a Mike Wheeler adventure book.

The only spoiler that I will not try to hide is that there’s lots of empty space when you open the box; a seemingly disappointing amount that makes you think something is missing. The STD&D does come with a starter set rulebook, an adventure book, 5 pre-gen characters, two demogorgon figs, and a set of dice. All are nicely produced but there were 2 things that surprised me.

The first is that you receive 2 demogorgon figs (one painted and one not) – now this surprised me that both were not painted but then it’s clearly labeled on the back of the box and if you want to customize, then I do get it. But these do seem like a money grab element to make gamers and others want to buy the set. I mean there’s a cut-out window on the front of the box showing the painted demogorgon fig.

The second surprise (spoiler alert) – all the pre-gen characters start at level 3. Now, purest will scoff at this because most starting players or campaigns have you start at level 1. But I really liked this a great deal. I tried to get some of my friends and even my kids to play D&D before and most really didn’t like their 1st level characters because they can die so easily and if you’re a caster of any kind, you have only a few weak spells.

Starting at 3rd allows new players to begin at a relatively fun level because you have higher Hit Points, better attack, and can sling more and more powerful spells like Fireball or Lightning Bolt. The pre-gens are not all your classic character classes and I was ok with that. You will not have the classic fighting and stealth classes, but it does include the classic arcane and faith-based classes.

I have been playing 5e since 2014 and I know the game well, having played several different character classes. I must admit that these truncated rules are very well written and organized like the core books, but has obvious omissions from the Player’s Handbook like full character generation and background sections. All that information is already included on each pre-gen character and the rules tied back to those sheets quite well.

There are sections for weapons, armor, equipment, spells, and such (truncated and only pertain to the pre-gens), but still have some additional items and spells to customize the pre-gens somewhat. I guess the downside is if you are using the STD&D exclusively you cannot build your own character or chose a different class aside from the supplied 5 pre-gens. But then again, this is a starter set so that’s sometimes expected.

The STD&D also includes brief magic and monster sections that, again, tie to the Adventure Book. Both sections give great details of possible magic weapons, armor, and items that players might find and monsters that they will encounter and battle as well. There are even stats for the demogorgon and the STD&D brings back a classic from the Monster Manual II.

My biggest complaint is there are pictures of the Stranger Things series (season 1 & 2) sprinkled throughout this book. All but one image doesn’t tie to the content of the Rulebook and seem to just be images of the show to draw you in if you’re thumbing through it. And this is the only imagery in this rulebook so for players just starting I think this is a blunder. I know that D&D is a storytelling game to spark your imagination but this Rulebook gives new players nothing aside from random images from the show. I mean there’s a ton of D&D fantasy artwork (new and old) that could have been included.

This book is essentially a module of supposedly Mike Wheeler’s design: The Hunt for the Thessalhydra. This book, like most adventure modules and campaign books, is really designed for the DM and not really for player’s eyes. It has decent starting background that the DM can share with players. It also includes plot hooks for the PCs to choose and follow. Overall, it’s a simple adventure module with basic encounters and dungeons which seems appropriate for starting players. And there is a Stranger Things tie in. PCs will get to explore the Upside Down and possibly face the demogorgon.

My only complaint is that the whole Adventure Book uses a handwriting font to possibly mirror Mike’s handwriting and sketch art. The font is large by comparison to the Starter Rules and to me, it seems rather unnecessary to do the whole book this way. If they did an intro or starting DM notes sure, that makes sense to me. But doing the whole book this way seems like it was done to make the Adventure Book seem longer than it really is.

If the players finish the Adventure Book, then they should level up to 4th. And the pre-gens have that info on the back of each sheet. So, this is not a long module and again, I think that’s ok for a starter set. After this module is complete then I would assume that players could move onto the core books and get the full experience of what 5e has to offer.

Overall this is a well-designed and organized starter set. If you remove the Stranger Things images (and replace with fantasy images), demogorgon figs, and the silly handwriting font of the Adventure Book this could be a more modern Basic starter set. But this set is marketed as Stranger Things Dungeons & Dragons Roleplaying Game Starter Set and it feels unnecessary.

Honestly, it does feel like a money grab to me, but I understand Wizards of the Coast trying to find new players by tapping into their love with this show. I think new players will appreciate how complete the starter rules are, and the detailed pre-gens which are well-supported by the rules. After playing, if players want to create their own characters and play more D&D, then they would need to move up to the 5e core books and get the full experience.

Final Score: 3.0 Stars – a well-organized starter set that will allow new players to get a good grasp of D&D basics, but the Stranger Things elements are pretty pasted on.

Hits:
• Pre-gens are excellent and well supported
• Starter rules are well-designed and organized
• Adventure Book is a nice starter module