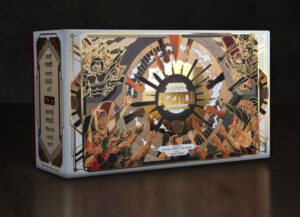 I just completed a review of SHASN in early August and gave it high praise. The elements that stood out for me were the high player interaction, replay value, and that it was quick to the table with easy-to-learn rules. Now, easy to learn rules doesn’t mean it’s an easy game to master, especially since you’re in a heated, competitive election campaign. Your best laid plans will devolve into plans B, C, and the like so SHASN keeps you engaged and other players will keep you on your toes.

This brings us to today’s preview SHASN: Azadi, another offering from Memesys Culture Lab where players are revolutionaries trying to free their country from a tyrannical Imperial power. This semi-cooperative SHASN expansion is for 2-5 players that plays in about 90-180 minutes.

Azadi uses SHASN components such as player mats, voter pegs, HQ mat, voter cards, and resources reserves. Azadi came with its own Ideology cards, so the core decks were not needed for this preview.

You’ll need to do the following for Azadi set-up. Shuffle the various card decks and each player will set-up their corresponding Dissent Mats with token and color markers, add the Glory Marketplace to the HQ mat, and set up the Imperial Arms Mat and Annex with the appropriate markers and seals.

Before set-up is complete, decide player count and difficulty level (there are 3 levels of difficulty) which will determine how many Azadi cards and how The Fuse marker will be placed in the Ideology Deck (this acts as the game timer). The last set-up step is players will build the modular board which is also affected by player count.

Once set-up is complete play begins and each player can do the following on their turn:

Start of Turn:
1. answer Ideology card (new: able to redraw by spending resources)
2. gain resources and Ideology card
3. if players unlock a Level 3 or 5 Ideology power they remove and keep the corresponding Imperial Seal from the Imperial Arms Mat.

End Turn Action: Read Ideology card to the next player.

When an Azadi card is triggered, all players will first act out of turns and do the following in order. Azadi cards are triggered when player(s) gains a majority in a zone or if a player places a voter peg on the Frontline Area on the zone.

Phase I:
1. read the Fallout from the Imperial Power (a one-time negative effect to players).
2. players can commit Dissent (0-5) to overcome the Imperial Order listed. If the players gather enough Dissent points, they overcome the Order. Otherwise, failure will result in an ongoing effect until the Azadi card is resolved. The Azadi card is then opened to reveal two options for players to resolve (two sides favoring an Ideology).

Phase II: Players will resolve these Azadi actions on their turn and when they complete will gain Legacy tokens (these allow players to Build and Upgrade Monuments which provide players bonuses throughout the game). Once the Azadi card is opened it will affect the Imperial Arms Mat and allow the crown token to move and adding more negative effects on the players. If all actions on one side are completed, then the Azadi card is resolved. The player with the most Legacy tokens draws a resistance card to place in a zone of their choice (these provide player bonuses in that zone if they have a majority).

Endgame: If all Azadi cards are resolved before the Fuse is drawn from the Ideology deck, then draw an Endgame card. If not, then the players lose. Players will try to resolve the two different Ideological actions on the Endgame card on their turns and gain that bonus during endgame. Once the Endgame card is resolved the following occurs: all non-majority Imperial voters are removed from the board, Imperial Arms Mat is no longer in effect, and players can no longer commit Dissent or spend Glory. Play then continues and will end when all possible majorities were formed and the player with the highest number of majority wins.

While Azadi is an expansion, it actually feels more than that to me. The mechanics, components, and semi-cooperative nature, give it a much deeper and different theme than the original. Azadi makes all players feel like they’re revolutionaries who can work together to resolve Azadi cards and overthrow the Imperials. Then that all changes once you reach the endgame where players will battle it out in a final campaign election to determine who will be the new leader.

What I liked about SHASN, and I noted this in my review, was that it was easy to learn. Now this is not a negative, but I just want to make readers aware that Azadi is much more involved especially when it comes to the Azadi cards and Imperial Arms Mat. It’s not that Azadi rules are difficult but there are more aspects to learn and apply to the game. Readers should also note that the game plays a little longer than SHASN.

I will admit that I’m usually not a big fan of semi-cooperative games. It’s mainly because most games don’t really pull off the mechanic and it feels pasted on to me. Azadi should be the blueprint for how to create and play a semi-cooperative game because it uses that mechanic perfectly. Players will need to work together when forming coalitions, determining Dissent to overcome Imperial Orders, and resolving Azadi cards but they will also need to keep in mind the endgame as well. Players must maintain a balance of the greater good but not sacrifice too much and hurt their chances to win the final player election.

I liked the SHASN gameboard, but I loved the unique and modular Azadi gameboard. The variety and change that this adds to the game is great. It can also grow throughout the game as Azadi cards can add new zones giving players (and Imperials) additional zones to use. Plus, End game cards can also add more zones and even unlock the Capital zone to make the final election game more interesting and exciting as well.

Lastly, I want to highlight the Imperial Arms Mat. Players will have a love/hate relationship with this component throughout the game. Players will collect the corresponding Arms Seal as they gain Ideology powers of level 3 or 5. The seal will provide a voter card power up where players can spend Legacy Tokens and gain voters and a one-time use power. While players will like the power up, they will not like that they just made the Imperials stronger by opening more actions for the Imperial to use against the revolution. The Imperial Arms Mat gives Azadi a great risk/reward feel as players gain Ideology power so do the Imperials.

If you want to try or have been looking for an excellent semi-cooperative, area control game that then SHASN: Azadi is absolutely worth checking out. Azadi will immediately immerse players into the role of rebel agitators in an election campaign trying to overthrow an oppressive Imperial power. If the players can shed their shackles, they’ll be battling it out with their fellow revolutionaries to become the new leader of the nation they helped create.

Game mechanics such as a modular gameboard and Imperial Arms Mat give Azadi great variety and an excellent risk/reward game mechanic. Azadi does increase the complexity of the original SHASN rules but also adds a different and deeper theme as well.

SHASN: Azadi is launching today on Kickstarter, so head over to their campaign page to find out more information or to become a backer.

Please note: Memesys Culture Lab reached out to say that backers can request a stand-alone Azadi version as well that would not require the base Shasn game.