We review SHASN, an area control game where players take on the role of a politician in heated political campaign. The player who gains the most points from majority votes, wins. 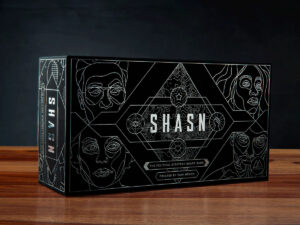 Two years ago, I was fortunate enough to receive a Kickstarter preview copy of SHASN. I knew nothing of this game, but it sounded interesting. I had to admit that it was pretty awesome. I was shocked just how polished and how much love went into the game’s appearance and mechanics. Unfortunately, the game designer, Zain Memon, requested that I send my beta-copy to another reviewer leaving a SHASN-sized void on my gaming shelf. Thankfully, something good happened in 2021 and I received a Kickstarter version to review and I was happily able to fill that space once again.

This brings us to today’s review of SHASN the political area control strategy game for 3-5 players (Kickstarter had options for a 2-player mode and board). It plays in about 90-120 minutes and is for players 14 and up.

The setup for SHASN is straight-forward. Decide which Ideology deck to use and shuffle that and the other decks. Each player will receive one of the four resources: street clout, campaign funds, media attention, and public trust. Players then vote who will be first player and they cannot vote for themselves. Play can now begin.

The player to the right of the active player draws an Ideology card and reads the question on the card aloud but hides the available resource rewards. Each Ideology cards are two-sided with the same question but depending on how the active player answers (yes or no) will determine the Ideologue the card is tied to and resources the player will gain.

There are 4 Ideologues in SHASN that appear on each player’s mat. The Supremo basically has fascist beliefs. The Capitalist focuses on commerce and free trade. The Showstopper tries to manipulate and influence the masses through charisma. And lastly, the Idealist wants to make the world a better place for all.

As a player gains Ideology cards that match an Ideologue (each has a starting passive power), they can unlock additional powers when they gain 3 & 5 cards of that type. Players will also gain and spend resources to influence voters or to purchase conspiracy cards (these cards are played against your opponents to foil them in some way). Players may also trade resources and even conspiracy cards with other players.

Players influence voters by purchasing vote bank cards of 1, 2, or 3 voters which allows them to place that number of their voter pegs onto the board into one zone. Since this is an area control game, a player’s main goal is to gain a voter peg majorities (more than 50%) in as many zones as possible. Gaining a majority in a zone will unlock the gerrymandering rights power which allows that player to move their and opponent’s voter pegs to and from adjacent zones.

Each zone has a volatile zone marked by a black circle and if a voter peg is placed there, this triggers a headline card which is played immediately and applies to the player that triggered it. These cards typically have some risk and reward to them.

The game ends when all players have formed majorities in all zones. Every voter that makes up a majority is worth 1 point and the player with the most wins. The game can also end if every voter area is filled with players’ pegs. In that case, each player gets one more starting with the player who placed the last peg and then score as above.

I hope that it’s obvious from the overview that SHASN is easy to learn and should be quick to the table. The turns go fairly quickly, and you should have most players engaged on each turn to see what other players are doing because it will affect them. Even with easy-to-learn gameplay that does not mean that SHASN is a simple game to master. It’s not at all. It’s actually rather challenging trying to decide how to best answer Ideology cards to improve your target Ideologue to improve abilities, how best to spend your precious resources on votes or conspiracy cards, and where best to place or move your pegs especially in the middle and later stages of the game. Your goal is to hold majorities and that is easier said than done.

The SHASN Kickstarter review copy I received came with five unique decks of Ideology, headline, and conspiracy cards. The Ideology decks are what the players interact with the most and these range from India 2019-2020, USA 2019-2020, Brexit 2019-2020, Fall of the Roman Republic 40 BCE, and The Future of Humanity 2040. Each unique deck comes with facts of the political climate to set the mood for players to think how best to answer the Ideology questions to their benefit. This sort of variety really increases the replay value and with additional content like elite politician cards, home turf markers and rules, the Edge of Chaos tracker, and an additional scenario book increasing that even more for SHASN.

The player interaction with SHASN is high and it complements the game perfectly. It’s not just reading and discussions around the Ideology Cards which will likely be the majority of table talk. It’s also going to be trading resources or conspiracy cards that will have players wheeling and dealing. But it’s also going to be how players will place voting pegs and move their or their opponents (Gerrymandering is fun but not when it happens to your majority) around the many zones. Many alliances will be formed and crumble throughout a game of SHASN so don’t expect to sit in silence and push cubes.

I must highlight the production values of SHASN which appear minimalistic in design but are just amazing. The images of the Ideologues and elite politicians are that of an abstract or one-line drawing style that compliments the rest of the hard lines of the iconography of resources, game board, player mats, and voter pegs. SHASN not only looks good but has high-quality linen cards and thick card stock of other elements. My personal favorite is the magnetic hinges on each of the unique Ideology deck making reuse and wear a non-issue. Overall, SHASN is beautifully produced and of high quality.

The only negative that I could come up for SHASN is that certain mechanics have a “take that” feel to them. It’s specifically the conspiracy cards and gerrymandering. Conspiracy cards generally benefit the player playing them or be a detriment to others. These are randomly drawn and cost 4-5 resources to purchase so these might not appear as much. Gerrymandering on the other hand is an essential tool for controlling zones especially when players have a majority and seek more. Both will likely frustrate players but if you play area control games then these will not be unfamiliar mechanics.

I hope it’s obvious to see and I really must give kudos to overall thought, intention, and effort of Zain Memon and his team. Their work to make the rules easy to learn, the amount of replayability, the excellent player interaction, and amazing production values make SHASN an easy must-have and play for me. While SHASN does have a “take that” feel with some of its mechanics, I think that can easily be overlooked given all its other strengthens.

SHASN is as fun as it looks and sounds, it’s absolutely worth getting. This one will be in my collection for a long while. I highly recommend it.

Final Score: 4.5 Stars – An amazingly produced political area control strategy game that is easy to learn but challenging to master.

Misses:
• Some elements have a “take that” feel