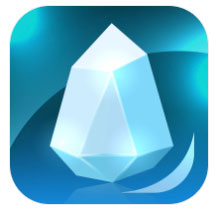 One of the first games to introduce us to the “center row deckbuilder” style of game was Ascension. While I thought the game was fun, the art style made me give the game a pass (it just wasn’t for me). Still, it did spawn a number of fun games that used its “draft from the center row” style of game play (Legendary, Clank!).

Recently, developer Temple Gates Games has brought the spiritual successor to Ascension, Shards of Infinity, to our digital devices. While the tabletop version came out last year, this is the first time gamers have been able to play this on their tablets and phones.

In Shards of Infinity, two or more players face off in a duel to reduce your opponents life to zero. In familiar deckbuilding style, each player starts off with an identical deck consisting of generic attack and purchase cards (and a couple of specials). On a player’s turn, they can play any number of cards to attack their opponents (or their champions). They can also use their currency to buy cards from the center row. In a neat twist, Mercenary cards can be bought and played immediately (then removed from the game) or added to your deck as usual.

In addition to gaining cards that attack, increase your buying power, or heal you, some will also give you mastery. When a player’s mastery levels up, various cards will become more powerful. This includes a starting card called the Shard of Infinity that, once a player reaches 30 mastery, gives them unlimited attack points (meaning you win the game).

Players will alternate taking turns until only one player is left alive.

Developer Template Gates Games did an excellent job of bringing Shards of Infinity to our tablets and phones. The game was clearly built off of the stellar Race for the Galaxy iOS engine, so anyone who has played that game will feel right at home here with the controls. Overall I found the app to be a near-perfect implementation, with zero bugs and smooth controls.

For the gameplay, players can play either offline vs 3 levels of AI, or online vs human opponents. I found the easy AI to be a good place to start, and with the medium and hard AIs actually putting up a decent challenge (or maybe I’m just really bad at the game). I can win vs the medium AI about half of the time, which was surprising because most of the time in digital games, the AIs are pushovers. So for anyone that just wants to play solo, the AI will definitely give you a run for your money.

You are also going to want to stick with just two-player games. With 3-4 players, the game falls into the classic trap of any other dueling/combat game. Inevitably, one player will get ganged up on until they are knocked out. And Shards of Infinity does nothing to address that issue.

Diving into the game proper, I found it to be a fun and clever take on the center row deck building concept. The Ascension gameplay model has been honed to a fine point here with lots of options for players to formulate their strategies. I partially liked the new Mercenary concept, as it’s a great option for spending money late in the game when your deck is running great and you don’t want to clog it up with more cards.

There are a few different “suits” in Shards of Infinity, many of which will combo off each other (and sometimes other suits as well). This helps to give players diverse options for how to build their deck. For example, a Wreath card might give you some attack points, but give you even more if you have a Wreath card in your discard pile.

One small cause for concern here might be the lack of any kind of campaign mode or unlockables. It also feels like Shards of Infinity will desperately need some expansion content if it hopes to have any kind of staying power. I’ve played many games so far and I already find myself feeling like I’m seeing the same cards quite often. Still, that’s only a minor gripe in an otherwise excellent initial offering.

Temple Gates Games did an excellent job bringing us a deck builder I didn’t even know I wanted. To be honest, Shards of Infinity flew under the radar for me when it was released last year, so I’m glad I got a chance to try out it out digitally. For new players, there is a guided tutorial to teach you the basics, while veteran players should be able to hop right in and start playing. Even though I don’t have a desire to ever play it with more than two players again, as dueling game against another person, Shards of Infinity is excellent. And it’s nice that the AI can hold its own when I don’t have the time (or connection) to play online vs another human.

Final Score: 4.5 Stars – An excellent implementation of the center row deck builder style of gameplay in an incredibly smooth app.

Misses:
• Already wanting some kind of expansion content
• Recommended for 2 players only