We review Clank! the deck building, dungeon crawling board game from Renegade Games Studios. In this board game, players are trying to earn the most loot from the dungeon before the dragon destroys all the thieving players. 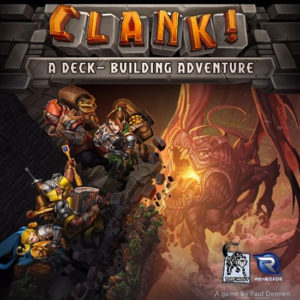 As a mechanism, deck building is reaching a moment of ubiquity. It is becoming more than a game function and has been integrated into several well designed titles. Can the standard tropes of selecting cards from a card row be applied to dungeon delving with a map? Paul Dennen’s new game seeks to answer that question.

Clank! is a deck building, dungeon delving game for 2 – 4 players that takes about 1 hour to play. Clank! plays best with 3 or 4 players.

Players in Clank! represent thieves venturing down into a dungeon to retrieve valuable artifacts and hopefully stay alive long enough to reach the exit. Actions in the game are accomplished through deck building, with cards played representing a more macro view of your adventures.

After opening the box, players are immediately presented with an expansive space that includes cards, a main board, counters, wooden cubes, meeples and a nicely made velvet bag with dragon logo. The cards are of decent quality. The board is nicely constructed and lays flat with ease. The counters are a bit thin, but they’re enough to serve their purpose. The cubes are standard, but the meeples are very nicely designed adventurer shapes, which helps draw players into the theme.

The game art is also well done, and because it takes a more thievery approach to the dungeon delving fantasy adventure theme, it stands out. The graphic design is clear and engaging. Overall, it’s friendly and uncomplicated.

The most standout component (besides the garish red box insert) is a wooden dragon head token that moves along the dragon track. It indicates the overall danger level of the dungeon and how much damage players could potentially take.

The main board represents a dungeon in a cross-section as if the viewer were looking at it from the side. Rooms and paths between them are indicated to show where various loot can be acquired and what paths will require more movement, keys, or fighting to fend off minor monsters. A ground level line divides the map into an upper section and lower section labeled the “Depths”. Players aim to reach a room with an artifact and leave the dungeon from the entrance/exit in the upper left corner of the board.

Each player turn is comprised of playing cards that give various resources represented by icons. Boot icons give movement points. Sword icons give fighting ability. Skill points come from a blue diamond icon with a number indicating the number of skill points for purchasing cards from the card row similar to Ascension and many other deck building games. Finally, gold awarded by cards is indicated in the text.

Using these resources, players move from room to room in an attempt to collect treasures for points. In addition, cards purchased from the card row will gain points at the end of the game or help the player with abilities in the dungeon.

Also available to purchase are two standard cards, Explore or Mercenary, in order to get more movement/skill or more fighting ability respectively. Players can purchase secret tome cards which grant lots of points, but like gold cards in Dominion, slow you down.

Monsters that appear in the card row are defeated with fighting points. This usually grants an amount of gold. Some spaces on the board represent an underground market where players can purchase equipment or treasure. Each treasure item also grants some victory points at game end.

After each player’s turn, the card row is refreshed with cards from the deck. If any of these cards show a dragon head, the dragon rages and attacks throughout the dungeon (figuratively, this isn’t represented on the map). During their adventures, players have been adding wooden cubes of their color to a pile of “Clank” cubes off to the side of the map. These cubes are now added to the bag along with black cubes.

To figure how much damage is done, a number of cubes are drawn from the bag based on the dragon marker’s position on the track. If a player’s cube is drawn from the bag, that player takes damage by adding it to their damage track at the bottom of the board. If a player loses all their health, they are knocked out.

If this player was the first to be knocked out or a player has left the dungeon, their meeple becomes a token on a time track at the top of the main board. Subsequent dragon attacks will occur over four more rounds. After that the game is over. Players will calculate points and a winner is declared.

One of the most noticeable ways that Clank! gets ahold of players is surprisingly a metaphor for the gameplay itself. The game design is unassuming, a thiefly shadow that slips in without appearing impressive. Gameplay is straightforward, almost routine. And then finally, a mad dash to escape raises the tension, and walking away from the table players will realize how much fun they had, despite the stumbles along the way.

From the very first played cards, players will be customizing their decks. This is where the game shines the most. The basic cards, explore and mercenary, are bread and butter in this game. For the first few turns, purchasing these to establish a ratio for a deck is key. Although Clank! uses the more random card row of purchasable cards, the competition is fierce to see who can get more valuable cards or whether to buy cards for points that have less functional value.

As play continues and players move throughout the dungeon, tension rises. Players will be constantly eyeing their opponent’s piles of loot to get a sense of how many points they’ll need to leave the dungeon and win. As cards refresh the card row, players are on edge for dragon attacks and hopefully needed cards are available on their turn. There’s also the tension of the various locations in the dungeon. Considering how far in the depths a player has gone and whether or not they can get back up to safety should someone else exit is another tension twist. Even though player interaction is minor, they still work extremely well together to make every turn engaging.

One of the best things in the game is how the cards in the card row are balanced for multiple ways to score points or gain abilities. A few cards do nothing but award bonus points for collecting certain items in the dungeon. There’s an array of high point value gems that also enable you to draw cards. There are also several monsters whose defeat can gain a player a high number of coins, a risky but profitable strategy. With each play, the variation of the cards and the time they arrive in the game drives new considerations to strategy, making replays exceptionally interesting.

Where Clank! does need a pause before commitment is in aspects of its theme and endgame. These are noticeable flaws but whether or not they affect the game’s fun seems to swing a great deal between players. Some will overlook these, but others may see these as extreme negatives.

Being based on high fantasy thieves entering a dungeon to steal artifacts, Clank! presents the regular tropes of fantasy including magic weapons, interesting companions and a vengeful dragon. This is well tread fare as theme for a board game. It can easily turn off gamers who feel they have seen everything dungeon delving can offer. However, the deck customization and Clank mechanisms really bring a good twist to this.

The endgame also poses some issues. The first player to leave the dungeon spends four turns doing nothing, merely watching the clock run out in the hopes that the other players cannot acquire enough points. The tension is still there for that player, but there are no actions to take. Also, if a player dies early due to taking a gamble on cards that provoke the dragon’s attention, they could be quickly eliminated from the game and thus start the endgame clock. An early end with no hope of winning is a possibility, but highly unlikely in most circumstances. Also, players could be paused waiting near the exit of the dungeon trying to outdo each other in card points. It’s dependent on the cards that come to the card row but, again, not very engaging.

One more issue that some players may call out is the number of monster cards in the card row deck. The overall ratio of monsters to other cards is 1 to 4. This means that monsters don’t usually show up en masse to the card row and a strategy with high numbers of mercenary cards is not as effective. Consumers should be on the lookout for expansions that will likely change this, but for now, players should recognize that this a game about stealth and stealing, less about fighting.

Clank! is an excellent example of deck building as action selection. There are great strategies to be utilized and the challenge of managing cards and movement around a board is extremely engaging. Players who are unfamiliar with deck builders may need an introduction, but across the board from veteran to newbie gamers, Clank! is highly entertaining. Despite the randomness in the card row purchases and personal card draws in general, the board mitigates much of the chaos and over-arching strategies can be executed. The small features that pose issues distract minimally from the enjoyment resulting in an always-in-the-game-bag game.