Note: This preview uses pre-release print-and-play components and rules. What you see here will be different from the final published game. 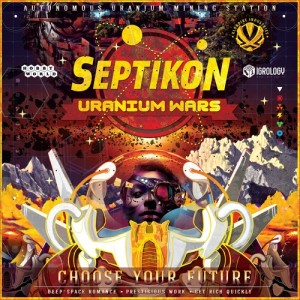 Life is tough for an asteroid miner. You are just sitting there, mining your own business (see what I did there?), when bam! A rocket crashes into your mining station, destroying one of your precious clones. Don’t you just hate when that happens? That’s the premise behind the new sci-fi board game Septikon, currently in funding on Kickstarter. Septikon has players attempting to destroy their opponent’s mining station before their own station is destroyed.

Septikon is a two-player battling board game that plays in about 45 minutes.

In Septikon, each player is trying to disable their opponent’s mining station before theirs is taken out. This is accomplished through a variety of weapons that a player can launch at her opponent on her turn. Each turn, a player rolls a die and moves one of her many clone units. Whichever space that clone lands on is activated. Players must carefully manage their resources and keep their own damage in check, all while trying to destroy their opponent. The first player to sufficiently disable her opponent’s space station will be the winner.

Game play in Septikon is fairly easy to pick up. However, while the game play rules are really easy to learn, the hardest part about Septikon is understanding the game board. The board can look pretty intimidating at first glance. The board is divided into two halves, which each half being identical to the other. Each half contains a player’s mining base which is split into nine different levels. The first two levels contain a player’s production. These produce precious resources for the players. The next four levels are the warehouses which hold a player’s resources. The next two levels are the player’s weapons; spaces that will allow you to attack your enemy. Finally, the last level is the surface of the asteroid where players will send clones out to act as gunners.

To start the game, each player starts with five of each of the six resources, with an extra five energy. Then they place five of their clone units anywhere in their mining station.

Turns are rather easy to understand in Septikon. They essentially boil down to:
1. Roll a die – It determines all movement for the round.
2. Pick and move a clone and activate the square he lands on. – This is where the meat of the game happens. A player can choose any of his clones to activate. He moves exactly the number shown on the die. Whichever square he lands on is activated. If it’s a production square, it will produce the specified resource. If it’s a weapon square, it will fire the specified resource. When a weapon is fired, a player chooses one of his gunners on the asteroid’s surface from which to launch the weapon. This is how a player can aim at his opponent’s station. Whichever column the gunner is in will be the origin point for the shot fired.
3. Move any in flight rockets/bio-drone capsules – Some weapons take a little bit of time getting to your enemy; these move every turn along the column they were fired in, based on your die roll.
4. Check for victory – If a player is disabled enough that they won’t be able to attack anymore, he loses.

That’s basically how to play in a nutshell. The real key is knowing what all the squares do. The resource squares are fairly self explanatory; they have an easy-to-understand input/output design. What’s on the bottom of the square is the cost to activate: it produces what’s on the top of the square.

The weapons are a bit more difficult to understand and remember because there are so many different ones. I like how diverse they are as it gives a player many options, but it does add the to to the learning curve. After a while though, things should all make sense.

I’ll be honest: it took about half the game for Septikon to really click. There is a great deal going on at the start that it’s easy for new players to feel a little overwhelmed. We understood how to play and the basics of the game, but formulating a strategy didn’t really start to happen until the second half of the game.

But once we got a feel for what needed to be done, Septikon was pretty enjoyable. At that point in the game, we were both on pretty equal footing, but we were finally starting to wrap our heads around all the many options you have on your turn. And many options you will have. I think Septikon would greatly benefit from a player aid/cheat sheet. The production squares are easy enough to understand, but the weapons squares aren’t as intuitive. A player reference here would go a long way towards helping a new player understand the game.

One of the interesting things I found out about Septikon is how it overcomes the hindrances that are often found in “roll and move” games. In most games, you have one pawn and you are at the mercy of the die roll. In Septikon, you have an army of clones at your disposal. At any point in the game, you could have up to 10 clones on the board to do your bidding. While this won’t give you more actions, it does give you a ton more options on your turn. If they are all placed well enough, you should be able to reach any square you desire on your turn.

In Septikon, you have numerous strategic options and hard choices on your turn. I found out a little too late that you need to strike a careful balance between offensive firepower and producing resources in the game. Neglect either at your own peril. I found out too late just how important it is to keep your metal production up. As your station is being destroyed, the only way to repair it is to use the repair squares, which cost metal. If your metal warehouse ever gets destroyed so that the outermost square is taken out (thus blocking your access to the resource), you’ve basically lost all ability to make repairs for the rest of the game. This is an interesting facet of the game that helps keep the playing time in the 45 minute range, rather than the 2-hour range. Once your station loses the ability to repair, you better take down your opponent quickly!

Finally, Septikon is all about direct conflict. You are trying to keep your station intact while constantly trying to bombard your opponent with firepower. I think this will appeal to many players that enjoy a good war game. Septikon is fairly unique in its design and there aren’t many other games like it. At first glance at the board, I thought the squares and resource production would give it a bit of a euro feel, but that notion was quickly squashed when all the rockets started flying. Septikon is all about the conflict and fighting. The resource production is only there to keep your weapons firing.

I think Septikon is a game that’s only going to get better with more plays. Our first game was a little rough since we really had no idea on strategy. But after more plays, games will run smoother and you’ll have a better idea of what you want to do in a game. Strategy becomes much easier once you know what each of the weapons do and when to use them best. While it does make the game harder to learn, I do really enjoy the variety of all the weaponry. There are so many options on your turn that I can keep my strategy very flexible and helps the game stay interesting.

While I don’t think Septikon will appeal to everyone, especially the euro crowd, it does make for a great two-player war game. I think Septikon offers something different to the fighting genre that I haven’t seen before. It’s a nice change of pace from the standard army war games and I think anyone who likes direct conflict in a game will have a blast with Septikon (pun intend).

If you are interested in the game, it is currently in funding on Kickstarter and scheduled for delivery in May 2014. A pledge of $60 will get you a copy of the game and all the stretch goals. You have until Wednesday, September 25th to become a backer so head over now.