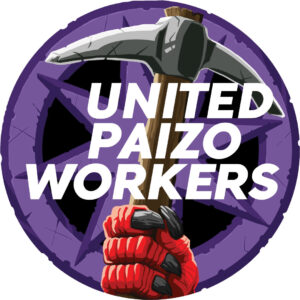 Today, some 30+ workers a Paizo, the publisher of the Pathfinder and Starfinder RPG, announced plans to form a union. They have formed the United Paizo Workers union (UPW), with the Communication Workers of America’s CODE-CWA project. This is one of the first unions attempting to be formed in the tabletop industry. The only other tabletop-related union of note is probably the Kickstarter United union formed last year.

The press release from the UPW talk about their love of the company, yet how they also have complaints with the work environment:
“However, despite this success, Paizo’s workers are underpaid for their labor, required to live in one of the most expensive cities in the United States, and subjected to untenable crunch conditions on a regular basis.”

They also brought up the recent hostile work environment and racist anti-LGBTQ executive board allegations that came to light a few weeks ago.

It should be noted that the Paizo workers have not actually formed a union yet and are asking Paizo to recognize them. I am not an expert in unionization, but I believe some kind of vote will be required from the majority of Paizo workers to be officially recognized as a union (feel free to post in the comments if you know the official steps that will need to be taken).