We review Overboss: A Boss Monster Adventure, published by Brotherwise Games. In Overboss, players are creating their own 8-bit world by drafting tiles and monsters. 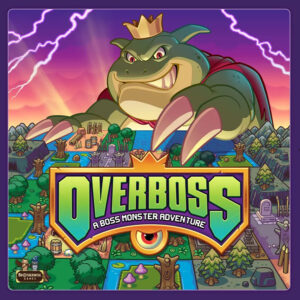 When I mention open-world video games, you probably think of Grand Theft Auto or one of the multitudes of modern video games. However, one of the very first ones was The Legend of Zelda on the Nintendo Entertainment System. Players would guide Link on his quest to save Zelda from the evil clutches of Ganon. And thinking about that game, it’s hard not to remember the game’s memorable overworld map. From mountains to forests to mystical graveyards, the look of The Legend of Zelda is burned into our memories.

And that was my first thought when I opened up the box of Overboss: A Boss Monster Adventure. This new tile-laying and drafting game from Brotherwise Games (Boss Monster, Call to Adventure) has players creating their very own 8-bit world.

Every game of Overboss uses a set of 5 random terrain tiles and matching monsters, which are tossed into a bag or shuffled. A market is created that has four randomly drawn tiles and monsters available for selection.

On a player’s turn, they will draft one “set” of terrain and monster. These are immediately placed into the player’s grid. Then the market is refilled, and the next player goes. Turns go by in this manner until each player has drafted enough tiles to fill their grid (either 3×4 in the basic game or 4×4 in the advanced game).

For end game scoring, players will earn points in a couple of ways. First, each tile will score points based on its type. For example, forests score points on a sliding scale base on how many you have, while caves earn you points by being next to mountains. Altogether there are 11 tile types that each score in their own way.

The other way to earn points is by your monsters sitting on the tiles. Each monster earns 1 point if it’s on the tile-matching its terrain type, and then also earns points for being part of a “Band”, a horizontal or vertical line of the same type of monster, with the bigger band earning more points. The player with the most points wins.

Overboss is a surprisingly streamlined game that’s both easy to learn and plays quickly, with a playtime clocking in at about 20-30 minutes. But despite the simple ruleset, there is a decent amount of depth and decision-making in the game. This is in part because you are drafting two types of tiles. While they are drafted as sets, players must decide if they are going to prioritize the terrain type or the monster with it. Both have the potential to earn a decent amount of victory points.

I also appreciated that there is both a simple and advanced version of the game. Our first play was the basic game and, while we had fun, subsequent plays of the advanced version really stole the show. I liked not only having the extra tiles in the grid, but the boss powers. Each player gets a boss character that gives you a one-time use power and a unique scoring condition. This was a simple change, but it added another layer of interest to the game. There are also some “take that” cards that can be added in if you choose, but we didn’t feel they were necessary for the game and rarely used them.

With 10 different terrain tiles and monsters (the 11th is the dungeon tile that is always used), Overboss features a lot of replay value as you only ever use 5 in a game. The downside of that though is the teardown time for the game is a bit longer than I’d like. Having to separate out the tiles and monsters into stacks was a bit of a chore. I almost wish they had forgone tying the monsters to terrain types and just had 5 static monsters to use. Earning that one extra point for being on a terrain type was nice, but hardly a game-breaker. I suppose this could easily be house ruled to speed up setup and tear down though.

Finally, the art and production values in Overboss are pretty fantastic. I loved the retro 8-bit art, and it was a lot of fun to build my Zelda-inspired world. Artist Darren Calvert did a great job of bringing each terrain tile to life, and I appreciate that each tile is unique, even among the same types of terrain. Everything is also stored nicely in a gametrayz organizer allowing for easy setup.

Overboss is one of those games that doesn’t really break any new ground when it comes to its mechanics. The tile drafting and scoring rules you’ve probably seen elsewhere in games before. But it works well in Overboss and most of my gripes were fairly minor. I didn’t go into this with high expectations, but the gameplay really gripped me. From the retro-inspired art to the decision-making each turn, I really enjoyed each play of Overboss, and it’s made its way to my gaming table fairly often.

As a plus, having both a basic and advanced version (and solo as well) makes it a game that can easily slide into anyone’s collection. Overboss is both easy to get to the table and thoroughly enjoyable.

Misses:
• Teardown afterward is a bit much