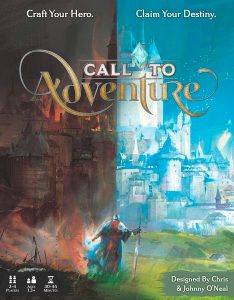 The hero’s journey is the template on which many beloved stories are crafted, with the components of the archetype of the monomyth appearing in fiction throughout history and into the present day. Star Wars and Lord of the Rings jump out as the prototypical examples, but the monomyth can be seen in less obvious examples in works by Hemingway, Bronte, Salinger, and Dickens. No matter who is crafting the story, the initiating feature of the monomyth is the call to adventure, the trailhead to the path of the journey the hero will embark upon. Call to Adventure by Brotherwise Games puts you in the role of a hero, taking the first steps on the path to fulfilling your destiny.

Call to Adventure is a set collection and storytelling game for 2-4 players that plays between 30-60 minutes, and plays well at all player counts.

Call to Adventure begins with you choosing an origin, a motivation, and a destiny (kept secret) which gives you a set of starting runes and a set of conditions for scoring points at the end of the game. Rolling the “dice,” referred to as casting runes, is the main mechanism in which cards are gained, with players adding runes to their pool granted to them by their played cards, alongside the basic runes that all players have access to.

There are six flavors of runes, corresponding to various physical and mental characteristics usually found in a fantasy role-playing game. Players also have the option of adding dark runes to their pool, but risk-taking penalties apply as the game progresses and at the end of the game.

On a player’s turn, they have the option of either paying for a trait card or casting runes to attempt a challenge. Each challenge card contains two possible missions, representing the choices a hero makes on their path to destiny, each with their unique difficulty level, and specific runes to be used to attempt the challenge. Players build their rune pool, adding dark runes and using other powers and hero cards as they desire, then cast their runes. If the number of successes shown on the runes is greater than the difficulty rating, the players overcome that challenge, adding it to their tableau.

Play continues until one player has gained 9 cards into their tableau, ending their journey, as well as the game. Players add up points granted to them by the various cards they have collected throughout the game, experience points earned from player powers, bonus points from their position on a light/dark track, and points for matching sets of related cards in their tableau. The player with the highest score is declared the winner and the hero of destiny!

It is well-established that our favorite games are the ones that allow us to craft a narrative around the action that is occurring in the game, and Call to Adventure provides that experience in spades. Starting with the initial selections of your origin, motivation, and destiny, you immediately become immersed in your character, with their background and their story’s end already revealed, and the fun laying in the experience of building the path of how your character ends up at their ultimate fate. As you attempt challenges and add traits to your character, the hero you build fleshes out, with the deeds they achieve ultimately leading them, whether directly or indirectly, to their destiny. Our plays were filled with weaving tales of quests filled with honor and duplicity, with violence and peace, and with triumph and defeat. It felt sometimes that we were playing more a role-playing game and less a card game.

If Call to Adventure were only a storytelling game, it would be solid enough, but the powers granted to you by the traits and challenges you select mechanically support the path towards your destiny. If you are a poor squire who is destined to rule the realm with an iron fist, Call to Adventure rewards you for making choices that tend to have a little more of a darker bent to them; you would rather infiltrate an assassin’s guild rather than destroy them. The challenges grouped in sets that earn bonus points for gaining them all have thematic ties together, helping create a more coherent story for your character (and high-scoring as well). That is not to say that Call to Adventure is on rails—you have plenty of flexibility in creating your character’s story, and the challenge to build your character development from seemingly disparate components is part of the enjoyment.

The rune tiles and the idea of casting runes tiles support the game thematically and in gameplay, giving a unique twist on the concept of rolling dice. Gaining runes in one of the six attributes allows players higher probabilities for success in challenges, and specializing in a particular attribute unlocks a more powerful rune for players to cast. We also liked the risk/reward nature of the dark runes, allowing for the opportunity of more successes, but the peril of gaining corruption.

The design of the actual cards, however, could have been improved. While we are appreciative of the accessibility of using symbols and colors to represent attributes on runes, we found counting up runes as shown on the cards to be a bit difficult, since the symbols are printed rather small. The same can be said for the icons representing sets of cards for set collection purposes; a larger illustration would go a long way to supporting gameplay.

Another of our concerns with Call to Adventure is the design of the corruption track and its interaction with various cards. Quite honestly, it took our group a few plays to decipher how to gain or lose corruption based on the iconography on the cards, and how to score certain destiny cards based on corruption track position. It’s not a game-breaker by any stretch, but it caused some headaches during gameplay.

Despite those concerns, we found our plays of Call to Adventure to be engaging, with a solid amount of replay value. A number of mini-expansions are included alongside the base game, allowing players to add in allies and enemies that can be gained (much like traits and challenges) to add some complexity and choice to each play. While the first expansion, based on Patrick Rothfuss’s The Name of the Wind, is already out, we are eagerly looking forward to the Stormlight Archive expansion, based on our favorite series from Brandon Sanderson. The potential this system has for expansion is endless, and we cannot wait to see what is coming down the line from Brotherwise Games.

Call to Adventure is a quick-playing title that has integration of both theme and mechanics, providing great enjoyment in the crafting of the story that your hero follows to their eventual fate. While our minor quibbles might make you think the game will sink into the abyss, it does not prevent it from crossing the threshold into being an extremely enjoyable game with virtually unlimited design space available for expansion. We heartily recommend Call to Adventure to virtually any gaming group.

Final Score: 4.5 Stars – This title is definitely the Gift of the Goddess.

Misses:
• Design elements can be improved for smoother gameplay.
• Some conflicts between iconography and rules text.