We review Mutants, a card drafting and deck building game published by Lucky Duck Games. Mutants is almost a hybrid style of game where a euro game is mashed up with a LCG game. 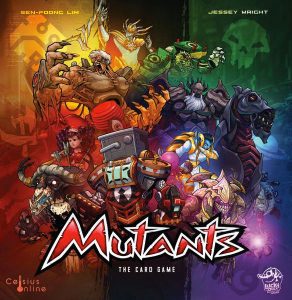 Game reviewers see a lot of different themes in the course of evaluating games. From the simple act of running the family farm to managing a galactic civilization, the size can vary wildly. What can also vary greatly is the tone. Within the area control realm, you could be landing butterflies on favored flowers or gunning down mobsters by placing dice. Whatever the story, designers are always looking to find just the right theme to fit their mechanisms.

There’s a lot to dissect with the next game on the BGQ lab table. The theme and game name is Mutants. It’s a card game with some deck building and some drafting elements spliced with an arena fighting theme. It’s easier to picture if players imagine themselves in the future as managers building genetic fighters for entertainment. It’s for 1-4 players, works best at 4, and takes about 2 hours at that player count.

Mutants is a game of two parts. Because of the structure of most rules documents, they often cannot explain how important something during the setup is to the outcome of the game. It is this first part, during the complex “Setup” of the game, that a player’s first strategic decisions come into the picture.

After setting up player boards with an initial deck of cards, players will draft cards from a 36 card deck representing a collection of advanced mutants. These are mutants that don’t start in a player’s deck but they can be drawn into a player’s hand or moved into a player’s deck during the game. Once each player has selected 6 advanced mutant cards, they add all the remaining copies of those cards into shuffled decks above their player board. This is their “gene pool”, 3 piles of cards from which to pull new cards into the player’s deck. Think of it as the player’s personal card market. It is essential during this step that players know the card abilities and how to synergize them in order to do well.

The second part of the game is what people just normally consider the main game. It is here that players build up their decks by bringing Advanced Mutants into play with the hopes of winning battles or moving mutants into their Cryo Freezer for points at the end of the game.

The second step is to move any mutant card that is located in the “Active Mutant” spot to either a left or right side spot on the player board. The act of doing this will push any card that is already there off of the board. When it leaves, it triggers an effect called the mutant’s “leave” ability. This is one part of each Mutant card’s activated effects that players will want to combo with other cards in play.

Finally, a player takes a single action. One of the most common ones is to play a Mutant from the player’s hand to the Active Mutant spot. When this is done, a player activates the Mutant card’s “Deploy” ability. Sometimes this is an instantaneous effect, but it can also be an ongoing effect.

Two other actions available during this part of the turn are to Breed or Incubate. These are two different methods of gaining Advanced Mutant cards from a player’s Gene Pool. When Breeding, a player discards cards containing the symbols of the Advanced Mutant they wish to acquire and they then take the card from the top of one of their Gene Pool stacks. Alternatively, to Incubate, a player discards any single mutant card to place the acquired card in their Incubator. Any cards placed here will be put on top of a player’s deck at the beginning of the following round.

Once players have played all the cards in their hands, the round ends. The player who is highest on the Battle track gains points based on the round. This is the primary way of gaining points during the game. Second place players will also collect some points, and a last place player will gain 0.

After 5 rounds, the game ends. Final points will be totaled by adding points from cards that have been put in a player’s Cryo Freezer. This could be a significant amount so counting laurels by looking at the Battle results is not a good idea. And of course, the player with the most points wins.

It’s pretty safe to say that reviewers like to be taken by surprise with a design. With Mutants, what can appear outwardly as a half-conceived game actually comes together as a solid package. Despite the unassuming name, Mutants is a high-quality card game. With card combos and strategy galore between setup and execution, it has everything that card gamers love.

However, as alluded to in the introduction, Mutants really hangs on its theme to engage players. This reviewer doesn’t normally complain about a theme except where it doesn’t fit or is very thin. In this case, the story concept is somewhat well implemented but it doesn’t seem to fulfill its promise. It describes itself as a battle game but actually turns into a calculating game of card economy and action usage. Since many card abilities trigger in a passive way, it feels like a game of tactical planning rather than competing agency. This is very much at odds with the wonderful art which depicts fighters ready to gore each other to death.

The other challenge that Mutants really needs to overcome is the curveball it throws for game mechanisms. Since this is a game of earning Victory Points and timing via rounds, much like any good eurogame, the competitive structure is something different from most conflict card games that ask players to kill their opponent quickly. In this case, Mutants is a true CCG+Eurogame hybrid. For players who are prepared to jump in the deep end with this, they are rewarded with plenty of strategies. For those who like to keep those two worlds separate, this won’t sit well.

Despite these negatives, this reviewer will be holding on to Mutants with the hope that a multiplayer card game with lots of indirect interaction intrigues others. It’s different, but maybe that’s what’s best about it. It’s a card game that Euro players can get into.

Mutants is not your typical battle card game. In fact, during play, it doesn’t feel like it’s a battle. This is a Eurogame disguised as a LCG. That makes for an incredibly innovative and cool product that plays very well, but it may not be what players are looking for. The target audience is a group of card gamers who like to dabble in board games or a group of diehard Euro-gamers who will take a break to play a card game. They should absolutely take a look at Mutants. It’s rewarding and challenging with some of the same aspects of Blood Rage wrapped in a futuristic gene-splicing veneer.

Final Score: 4 stars – What appears as a half-conceived LCG reveals itself as a calculating and engaging game of competing efficiencies, never mind the theme.

Misses:
• Disconnect between theme and gameplay
• Indirect interaction may be unsatisfying