We review Lockup: A Roll Player Tale, published by Thunderworks Games. Lockup is a worker placement game where each player controls a prison gang in the Roll Player universe. 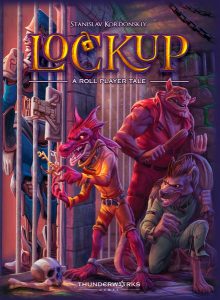 Thunderworks Games has had a lot of success with their Roll Player universe. Roll Player, published in 2016, was a surprise hit for many. Their first follow up in expanding the universe, Cartographers, was an absolutely fantastic roll and write game that we still play quite often. And now players don’t have to be content with just mapping the kingdom as they now get to spend some time in prison! Hurray?

Lockup: A Roll Player Tale is a competitive worker placement game that has players controlling a faction of gnolls, kobolds, bugbears, goblins, or insectoids locked up in the kingdom’s prison. Is Lockup a great addition to your stable of euro games or should it be tossed in the hole. Let’s find out!

Each player in Lockup controls one of the aforementioned factions. Players have a crew of 6 minions, each of which have a different strength score. Games will take place over six rounds, with each round having three phases.

During Roll Call, players will take turns sending their crew tokens out to one of the 7 different locations on the board. Players can place as many tokens they like at a location, but may not place more crew to the same location in a future turn. Also, up to two of a player’s crew can be placed face down to hide their value.

Once each player has placed all their crew tokens, each area of the prison is evaluated in order. The player who has the most total crew strength at the location gains the highest reward. However, if there are any suspicion tokens at the location, they also gain those unless they had their lookout crew member there. Other players there will either gain lower rewards or be sent to the library as a consolation prize.

Most of the locations will provide resource cubes to the players (in 4 different types) which can be spent recruiting goons (end game VPs) or crafting items (immediate VPs).

At the end of the 6th round, players total up their victory points and the player with the most is the winner.

I really enjoyed Lockup and thought it was quite a clever worker placement game. What’s interesting about it is the high level of player interaction that can be absent in games from this genre. While players choose their locations to send their crew to in turn order, it’s not first come, first served. Instead, Lockup uses a defacto bidding mechanic to determine who gets the best rewards. This allows players who really want a certain reward to make sure they get it, but they might overpay to do so.

This mechanic is further expanded by the fact that you can place two of your crew facedown. This helps create a bit of tension in the game as you don’t quite know what an opponent has placed at a location. I’ve seen players way overbid for a spot because they thought their opponent dropped high value crew there, only to have them reveal a 2 and a 3.

The downside of this mechanic is that since everybody has the same value crew members, that the first ones you place need to be the facedown ones. Otherwise, people can see what you have already placed and start to deduce what your facedown ones are by the process of elimination.

On the other hand, there is always a reward for placing your crew, so you never walk away empty handed. The top bidder at a location always gets the best reward, but other players also gain a consolation prize. Sometimes it’s a lesser amount of the same reward, while others are a trip to the library. The library can only be accessed if you don’t earn a reward from a placement and it lets the player draw Tome cards, which are rule breaking action cards that can be pretty powerful in the right situations.

Another thing I found interesting about Lockup was the turn order. In most worker placement games, you want to go first to claim the best spots. In Lockup, being first in turn order does allow you to win ties, which is great, but it’s not always the best place to be. Most of the time I like going last so I could see where other players are going before having to make decisions. If I notice that two of my opponents are fighting over one resource spot, I’ll concentrate my moves elsewhere. This leads to an interesting play experience where it’s good to go first, yet also good to go last.

My only other gripe with Lockup is that the 3 player game feels a bit too loose for my tastes. I think I would have preferred if the board had a 2-3 player map, and a 4-5 player one the other. Right now with 3, I don’t feel like competition is as fierce as it could be. But that’s a small complaint in an otherwise excellent game.

Lockup: A Roll Player Tale definitely manages to carve itself out a place in a very crowded genre. I really enjoyed the bidding mechanic for crew placement, which created some nice competition and tensions for places. While sure, the generic fantasy theme isn’t going to turn many heads, I thought the prison setting worked really well, and I appreciated how the suspicions cubes added a new layer of tension to the game. Those almost reminded me a bit of Clank! in that it can smack down a leader who is not too careful. All in all, I really enjoyed Lockup and have been loving the expanded Roll Player. Keep on bringing them, Thunderworks Games.

Hits:
• The worker placement mechanic was really interesting.
• No wasted turns, even getting bumped from a spot is OK.
• It’s good to go first, but also good to go last.
• Gameplay is easy to learn with minimal downtime.