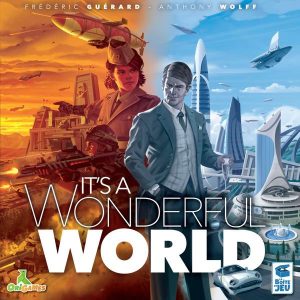 Huh? Half asleep, I stumble down my stairs and open my front door. There is a shrink-wrapped game sitting on my porch titled “It’s a Wonderful World.”

It hits me when I pick the box up. I text my unknown sleep stealer. “It’s WORLD, not LIFE. This isn’t a Christmas game.”

Fine, I thought. It’s not like I can do much else right now.

It’s a Wonderful World is a card drafting and engine building game in which you are trying to develop an Empire faster and more efficiently than your opponents. The game supports one to five players, with games lasting between 45 and 75 minutes.  The game is played over four rounds.

A round is made up of three phases:

The game ends after the fourth round. After all the scoring is finalized, the player with the most victory points wins.

I have two negative comments about this game. First, the name of the game is awful. My introduction was not an exaggeration. Multiple players thought it was a Christmas game when I told them its name. Second, the last round of the game can be frustrating, especially for new players, due the number of alternatives that need to be evaluated. For example, if you draft THIS card for its Recycle Bonus, will it give you enough resources to Construct a production card that will allow you to finish the big scoring card in your Construction Area. Ok, now what about the other six cards in your hand…

Bonus complaint/observation – try not to nudge your resource covered cards when reaching for something. Trust me.

Otherwise, this game is fantastic! I love drafting games. For me, every round presents a new tactical opportunity requiring you to evaluate a set of cards to determine which to keep and which to pass. It’s a Wonderful World uses three mechanisms to differentiate itself from all other drafting games:

The Recycle Bonus. This is a drafting game changer. In this game, you will NOT be able to complete all 7 cards that you draft that round (gameplay note: uncompleted cards from previous rounds can be completed in later rounds).

In most drafting games, you either draft what is beneficial to you or “hate draft” so your opponent doesn’t benefit. The Recycle Bonus creates a third category – drafting a card specifically for its Recycle Bonus.

The Engine Building. Most of your cards will be Constructed across multiple turns. Once completed, you receive a one-time Construction Bonus, if applicable, and the card will increase your score and/or your production. As you Construct more cards, your production and scoring opportunities grow quickly. At the same time, you will have to balance when to complete production cards versus scoring opportunities—too few production cards and you may not have enough resources to complete your cards, but too many and you may not have enough points to win.

The 5 Step Production Phase. This adds a timing aspect to the game that is crucial. Resources are produced in the following order: Minerals, Energy, Science, Gold, and Exploration. To illustrate this, if you complete a card with Energy production during the Mineral phase, it will add to the Energy production that round. Conversely, if you complete a card with Mineral production during the Energy phase, it will not improve production until the following round. I love this aspect of the game, although it can be frustrating!

In addition, resources earned must be placed immediately. If none of your cards require the resources produced, the unused resources go to your Empire card. While not efficient, you can convert every 5 resources on your card into one Krystallium cube (a wild resource). This resource can be used as either ANY resource or on a card that requires Krystallium.

The game has several other aspects that I really appreciated. The Supremacy bonus earned by producing the most of a resource in a round adds additional scoring opportunities to the game. This set collection adds another scoring opportunity that must be evaluated.

The retail edition includes 150 cards and the game does not group the cards into Ages, like 7 Wonders, so any card can show up in round 1, 3 or not at all. This increases the replay value, especially given the number and variety of cards. In addition, every card has an indicator in the top right corner for how many copies are in the deck. Thank you!

You can play with Empires that start with the exact same production (my preferred method), or you can flip the Empire card over and introduce variable starting productions to the game. I like that this option was included in the game.

Finally, I have not seen a specific strategy dominate. Some games were won with many low point scoring buildings, some with heavy-hitting scoring cards and one was based on earning multipliers based on the number of Supremacy tokens earned!

I absolutely love It’s a Wonderful World! The drafting creates tense decision making, especially because you cannot construct all 7 cards drafted each round. The Recycling Bonus is a mechanism that rewards drafting suboptimal cards and hate drafting. Add to the mix the engine building aspect of determining which cards to Construct and balancing scoring opportunities versus improved production, and you have what is, by far, my favorite drafting game. I enthusiastically recommend It’s a Wonderful World!

Final Score:  4.5 Stars – This engine building and card drafting game just hits all the right sweet spots for me.

Hits:
• Easy to teach and plays in under an hour
• Great replay value
• Lots of meaningful choices
• No dominate strategy
• Love the 5-step production

Misses:
• By the fourth round, maximizing your score can become a brain-burning exercise
• The name of the game