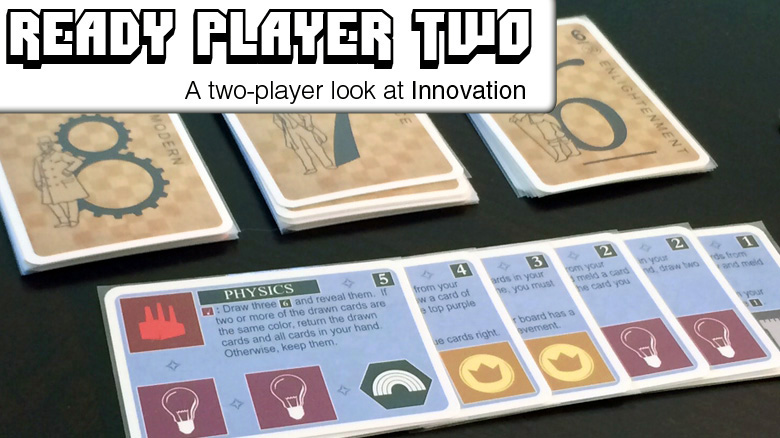 Alex: Welcome back to Ready Player Two, where Stephanie and I evaluate board and card games from the viewpoint of how they play with two players. Today we’re going to take a look at Innovation, designed by Carl Chudyk and published by Asmadi Games (now being published by IELLO). In this game, each player is trying to develop their civilization by playing cards representing technologies, arts & culture, and philosophies to score points and achievements.

Steph: I’ve got to be honest: when Alex first showed me the box and cards, I thought it was going to be a stupid game. It seemed too simple, too stripped-down. Boy, was I wrong, and happy to be wrong. Innovation is one of my favorite games. (Side note: we should play this tonight.)  Never has such a simple-looking game offered so much depth and re-play-ability. Yes, I just made up that word. I’m allowed to. I have a degree in English Education. Pfffttt.

Alex: I don’t think you’d allow any of your students to get away with making up their own words. Sounds dicey to me.

Steph: Not to me. Let’s cover the basics of the game before getting into why this is a superb two-player game. 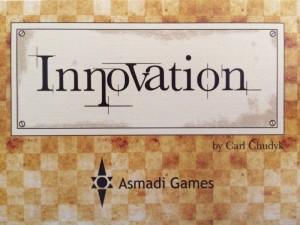 Alex: Anyway, Innovation is reliant on a few different mechanics, one of which being the “Dogma” action, which allows you to take actions based on the number of icons (castles, leaves, clocks, etc…) you have showing in your tableau. If you have more of the associated icon than your opponents, you get to take that action by yourself. On the other hand, if one of your opponents has more of said icon, you still get to take the action, but they get to take that action before you do. In addition, some of the Dogma effects are “I demand” statements, which require you to have more of that particular icon than your opponent in order for the action to have an effect.

Steph: I like the “I demand” Dogma effects. Maybe because it’s the only time I can say “I demand” without any consequences. But this is one of the reasons why Innovation plays so well with just two players: you only have to out-icon one other player. When I played this at our FLGS with four players, the “I demand” effect didn’t feel as powerful. I was only “Dogma-ing” one to two other players at a time. Causing your opponent to take an action that benefits you is a great mechanic; I prefer being able to do that to all of my opponents. Namely, you.

Alex: There you go making up words again. “Out-icon”? “Dogma-ing”? Last time I looked, I wasn’t married to Merriam Webster.

Steph: I prefer the OED. Shows how much you know.

Alex: In any event, I think a greater issue with determining Dogma effects with more than two players is the sheer amount of counting that has to occur. Since the tableaus are constantly changing due to shifting, playing and discarding, players are continually counting up how many of a particular icon they have showing, and as a player, I want to know whether or not the Dogma effect I want to play is potentially shared by my opponents. With four players, playing this way can bring the game to a crashing halt due to analysis paralysis.

Steph: Totally correct. The four-player game dragged due to all the down time. Every time I wanted to take an action, I had to count three other players’ icons to see if that action was beneficial to me.

Alex: With two players, it’s just an easy check to see whether or not my opponent has greater, equal, or less icons showing than my own icons. It makes for a quicker and more straightforward game.

Alex: Win conditions aren’t as much of a concern of mine; I think they scale well depending on the number of players. My main concern with playing with two players is that chaotic nature of the game as it is played with four players is somewhat lost. Playing with two, while enjoyable, is less about the craziness that can happen in a turn, and more about being tactical in your choices of actions. While that level of unpredictability in a game may not be desired by some, there’s something to be said for it in Innovation.  Not enough for me not enjoy it two-player, mind you.

Steph: What also thrives in the two-player game is the storytelling. Maybe it’s just us that do this, but we create ongoing narratives while we game. For example, if I play the Metric System card, I go into a whole monologue about how developing a base-10 measuring system clearly advances my civilization over Alex’s, which is still using an abacus. Harder to keep the narrative going when it’s more than two players.

Alex: Especially since we’ve already established that playing with greater numbers leads to a longer game to begin with. Besides, there’s nothing wrong with bi-quinary coded decimal system. If it was good enough for the Romans, it’s good enough for me.

Steph: No who’s making up words?  Bi-quinary?  My words make sense. Yours are just fancy pseudo-scientific terms mish-moshed together. I think this is a sign that it’s time to wrap things up. I think we’ve made our case.

Alex: I think that Innovation is more streamlined and strategic with two players, but I don’t necessarily think that it’s a bad game if you’re playing with three or four, especially if you enjoy games that end up a little less structured and a little more chaotic. Five players, though, is right out.

Steph: I agree. If we had a group of four who wanted to play the game, I’d be all in. I love Innovation. But I’d rather just play with you in two-player mode. 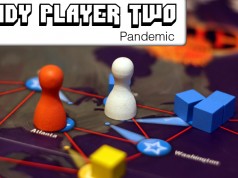