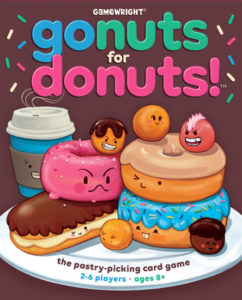 In 2014, Gamewright Games brought us the popular “pick and pass” style game Sushi Go!. This game took the 7 Wonders style card drafting mechanic and distilled it down to its essence. It was a very successfully game that’s even made its way to iOS.

I bring this up because Gamewright’s newest card game is sure to draw a lot of comparisons. Go Nuts for Donuts features cutely drawn food, easy to learn mechanics, and more set collection goodness. Does this delicious looking card game deserve a place on your shelf next to Sushi Go!? It’s time to find out.

The goal in Go Nuts for Donuts is to earn the most points over the course of the game. Each round, a number of cards are dealt face up onto the table (players +1). Each player then secretly selects a card they want. After revealing their choices, any player who was the only person to choose a specific donut collects that card into their score pile. If one or more players chose the same donut card, it’s discarded and no one gets it. A new round begins by filling the holes left in the line of donuts.

After all the donuts have been collected or discarded, the game ends and the player with the most points wins.

One thing I really like about Go Nuts for Donuts is the nice variety of scoring cards. Each donut will score (or penalize) points in a variety of ways. Some offer straight points, others award points on a sliding scale as you collect more of them, while others might actually be negative points, but give you a powerful one time ability. This variety helps to keep the choices interesting, which is good, because that’s really the central focus of the game.

That brings us to the good and bad with Go Nuts for Donuts’ mechanics. In the game, you are trying to not only figure out which donut you want, but also guess what your opponents will be taking. You almost need to try and read your opponents and figure out what they are going to select. So do you select the same card if you need to stop them, or move elsewhere if you really want to make sure you get a card. I could definitely see people having fun with these mind games.

However the downside of that mechanic is that the game can get pretty frustrating at times. When the game gets up to the higher player count, it’s fairly common for multiple people to select the same card. When that happens to you once in a while, it’s not a huge deal, but I’ve seen a player go more than 5 rounds not getting a card just due to bad luck. It almost makes me wish there was some kind of alternate way to deal with the selected cards.

Speaking of player scaling, I also wasn’t a big fan of the game with only two players. The game lacks some of its charm there, and with only 3 cards to choose from, the choice is usually fairly obvious. Take the best card or your opponent will get it. We would have 4 or more rounds in a row of use just selecting the same card so one player couldn’t get the advantage.

However despite those quirks, Go Nuts for Donuts is still an enjoyable game. I think the sweet spot lies without 3-4 players. There you get a nice variety of cards to choose from, but you shouldn’t be constantly butting heads with other players. The game is also incredibly accessible, as I was able to play with my gaming group and also with other non-gamer friends, all of which enjoyed it.

While not perfect, Go Nuts for Donuts does make for a highly accessible gateway game or light filler game for your gaming group. The donut cards offer a nice variety in the game play, allowing players to choose their strategy as they see fit. As long as you are ok with the threat of constantly getting no cards during rounds, Go Nuts for Donuts can be quite enjoyable. While it’s probably not going to replace Sushi Go Party in my collection, I will be keeping it around for those times when I want a somewhat “meaner” game.

Final Score: 3.5 Stars – A cute looking card game that’s very easy to get to the table even though it can be somewhat mean at times.

Misses:
• Can be frustrating to be constantly denied cards
• 2 player is a bit lack luster