We review Get Rich Quick, a simultaneous action selection from publisher FoxMind Games. In this gateway game, players are trying to be the first person to collect twenty-five fortune points. 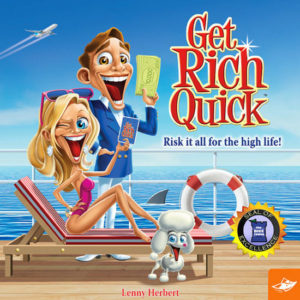 There are no shortages of board games about the acquisition of wealth. In fact, one of the most well-known board game in existence, Monopoly, is all about becoming rich by sending your opponents to the poor house. It’s just a shame that Monopoly is such a bad game, as it’s what most people think of when they hear the phrase “board game”.

However, publisher Fox Mind is seeking to change that with their latest offering, Get Rich Quick. They developed this game as a way to bridge their players into more modern board games. They hoped to accomplish this by using familiar looking components and easy to learn gameplay. Did they succeed? Let’s find out.

Get Rich Quick is a simultaneous action selection and engine building board game for 3-5 players that takes about 30-40 minutes to play. Get Rich Quick plays best with 4-5 players.

In Get Rich Quick, players are trying to be the first to acquire 25 fortune points. Each round, players must choose three cards from their identical hand of 7 cards in the hopes of earning money and fortune points. Eventually, they can work their way over to the mall to buy upgrades in the form of special abilities that make their action card plays even stronger. Be the player with the most fortune points at the end of the game you win!

I have mixed feelings on the components of Get Rich Quick. At first glance, they are not that great. First is the paper money, which I hate in games. Only one game has ever done paper money right (Millennium Blades), as paper money is often unwieldy and damages fairly easy. The Fortune Point chips themselves also are a tad flimsily, I would have liked to see them printed on heaver stock. Finally, the game board’s design is a bit of a mess. Things are jumbled all over the place and it can be hard to figure out where everything is (more on that later).

However, I also get what they are trying to do. Get Rich Quick is very much a gateway game. It’s designed to easy people who aren’t really into modern gaming into our beloved hobby. So from the paper money, to the loud graphics on the game board, everything seems to be designed to give new gamers a sense of familiarity. So I get that. And I think they accomplished their mission in that regard. When I tested it with new gamers, they felt right at home. Doesn’t mean I have to like it though. 🙂

Game play in Get Rich Quick is very simple to pick up. Each player starts the game with an identical hand of 7 cards. Each round, players will simultaneously select 3 cards from their hand to play. Once ready, each player reveals their chosen cards and then they are resolved from lowest to highest.

Card 1 is Work (Earn $1,000) and Card 7 is Take a Break (earn 1 Fortune Point). These are the safe cards that carry no risk.
Cards 2-4 are the risky cards. They cost money to play, but will possibly earn you money back depending on how many other players play the same card.
Card 5 is the Lottery card, a player earns money for rolling 3, 4, 5 of a kind on 5 six-sided dice.

Card 6 is where things get interesting. That allows a player to shop. At the mall, a player can buy a space that will give them a special ability to use during the game. These range from playing a 4th card on your turn, to making the work card more lucrative, to increasing your odds in the lottery, to outright buying chunks of fortune points.

After all 7 cards have been resolved players then pick their cards back up again and choose another three for the next round. Once a player has collected their 25th Fortune Point, the game ends and the player with the most Fortune Points wins.

Overall I think Get Rich Quick is a good game that does many things right. First and foremost, this is definitely a gateway game. From the game’s components, to its gameplay, I think this is a game that you will most likely be playing with family and new gamers. And in that role, I think it works out well. Players are able to pick up the mechanics very quickly and the game has minimal downtime.

Get Rich Quick does a great job of introducing new gamers to a couple of mechanics that are staples of modern board gaming. The first is the victory point (called the Fortune Point here). While victory points are ubiquitous in todays’ games, it can sometimes be easy to forget that most new gamers might never have played a game using them before.

At first I also thought that Get Rich Quick would teach new players about the worker placement mechanic, but that wasn’t actually true. While they can get a hint of how the mechanic works, thanks to the board, worker placement is not really a part of the game. The big mechanics here are the simultaneous action selection and engine building features.

Speaking of the game board, I’m not a big fan of it. Graphically, it’s a bit of a mess. But the real issue is that the game could have been better served with cards instead of a board. That would allow players to purchase their upgrades, and then place the card them in front themselves as a reminder of their new ability.

Even with its light depth, Get Rich Quick surprisingly offers many hard decisions to make. It’s not always obviously the best cards to choose each round and this is especially true due to the 3 risky cards. You have to try and read your opponents a little bit and so you can guess what they are going to play. This can be easier if you keep an eye on their upgrades. In one of our games, a player bought the “High Tech Bubble Burst” upgrade, so players usually could guess that he’d be trying to launch a startup most of the time.

And I also like how there are many paths to victory in Get Rich Quick. Some players will focus on grabbing those fortune point spaces on the board, where others will go for the engine building and get as many card upgrades as possible. I even saw one player focus on the lottery, because hey, who doesn’t like rolling dice. I even sometimes try and play it safe and go for the “Take a break” card every round. Slow and stead wins the race, right?

When it comes to player scaling, I definitely think Get Rich Quick plays better at the higher player counts. For one, as the game is mostly a simultaneous action selection game, there is no worry about increased length with more people. In addition to that, the three risky cards carry more risk with an increased player count. There is a much higher chance of a startup failing when 5 people might be choosing it vs 3.

One of the downfalls with Get Rich Quick though, is its play length. As the game is a fairly simple one, I think this one starts to wear after a while. Once we crossed the 30 minute mark, most players were ready to be at the end. I think the game might have been much better stopping at 20 Fortune Points or less. There just isn’t enough depth here for a 30-45 minute game and repetition will set in. This is especially true if someone pulls out to a commanding lead with their fortune points. It’s rare that I’ve seen someone make a come from behind win in Get Rich Quick.

While not perfect, I think Get Rich Quick does achieve its goals of making an accessible gateway game. It does a really good job of introducing new players to both simultaneous action selection, engine building, and just a hint of worker placement.

While most gamers won’t be a fan of the components, I do think they can help new gamers feel more comfortable. Even still, I would have liked to see cards that could be drafted, rather than the clunky game board.

If you are looking for a light board game that can appeal to new gamers and family members, Get Rich Quick is worth a look. While I think it’s probably too light for most gamers, as a family game it’s really solid. Get Rich Quick was a nice offering from Fox Mind, and I look forward to seeing what else they have on the horizon.

Final Score: 3 Stars – A good gateway game that can work well to introduce new gamers to our hobby.

Misses:
• Play time is a bit longer than it should be
• Not a fan of the graphic design of the game board
• Paper money.