We review Love on Lockdown, the newest expansion for the Fog of Love board game. This new expansion lets players play their games of Fog of Love centered around the time when people had to shelter in place. 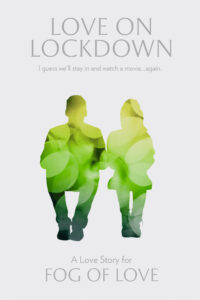 Anytime a new Fog of Love expansion comes out I’m excited to check it out, and one themed on a nationwide lockdown is no exception. While I’m not at all interested in playing games or game expansions that focus on the disease-side of our lived experience, I am interested in what can—and has—happened to the people that live through it.

Love on Lockdown is a psychological deduction roleplaying game expansion for Fog of Love, designed for two players that takes about 90 minutes to play.

Whether Fog of Love is a cooperative game or a competitive game really depends on how you individually approach it. I have seen folks make it about themselves, driven by the options on their Destiny cards or Trait Goals, about equally as much as I’ve seen people try to ensure both players have their happily ever after.

The gameplay follows the same setup as the base Fog of Love game, where players will choose three traits for themselves, their occupation, and three features of the other player’s character that your character “fell for.” Features and occupations will be the first sources of personality tokens. The sequence of play follows after to play out scenes based on guidance for the game’s chapters, which can be Sweet, Serious, Drama, or Custom (specific to the expansion). The results of these scenes will impact any number of things like satisfaction and personality dimensions.

The new mechanic in Love on Lockdown is the Risk/Boredom dimension which is directly tied to the increase and decrease in Extroversion or Discipline. Over time, the level of Risk or Boredom will potentially push a Reckless or Apathetic status token on the player(s) if they do not manage this dimension well. If a player would become Reckless or Apathetic a second time, they cannot go on and the game immediately ends. The rules for the expansion say that you can interpret the reasoning freely, and if you have the Paranormal Romance expansion the expired character can continue to play as a ghost!

Chapter 1, Page 1 starts the game expansion off with exploring where on the Risk/Boredom dimension the players begin and how their starting satisfaction measures up. I remember in March 2020 the looks that I exchanged with my partner when the news dropped that we would need to spend at least two weeks inside at home together, the amount of planning as well as panic that arose and the brainstorming of how to pass the time in a fun way. Scenes that follow have everything from innocent moments like music choices that lead to spontaneous dance parties, to stressful moments like dealing with one partner’s irritating habits being exacerbated by occupying the same space for too long. In this way, from start to finish I found that Love on Lockdown was an accurate retelling of that early experience.

One of the main draws for getting Fog of Love expansions is being able to play with the new Destiny cards which include thematic evaluations like Love on Lockdown’s Recklessness or Apathy in addition to the satisfaction and other personality dimensions like the standard Destiny cards. Over time players can get into a groove of when they introduce scenes during the chapter that may benefit their partner more than themselves, or vice versa so pushing the players into new directions or new considerations for that balance creates a good challenge. At least for me, I want the board games I play to continue to challenge me. As much as I enjoy being able to master gameplay, the heart of Fog of Love is experiencing a fun and fictional character dynamic.

When I first opened up the box for Love on Lockdown, I was a little apprehensive about whether a new dimension would be enjoyable or if it would just become a nuisance. On one hand, during the character creation process where the other player assigns features, it can ultimately force the opposing player into a type of personality trajectory that sets them up for more Risk or more Boredom if those features involve Extroversion or Discipline. On the other hand, players who want to find loopholes in the game can easily just avoid any scenes, occupations, or features that involve those two dimensions entirely which results in the ignorance of the Risk/Boredom dimension altogether. I’m not a board game designer by trade but one would think that introducing a new mechanic into a game would require it to be front and center rather than an “optional” experience. From a pragmatic point of view, you’re paying for an expansion so that it reinvigorates the base gameplay, not just adds more options to what you already have. In this way, I found that the new dimension was slightly disappointing in its execution.

Not only was the Risk/Boredom dimension easy to ignore, but it also conceptually had an odd take on its interpretation of Extroversion and Discipline as linked personality aspects. This link makes assumptions about human behavior that I don’t entirely agree with, in that it assumes that extroverted people or those who lack discipline are more comfortable taking risks while those who are more introverted or more disciplined are at risk for being bored. That was simply not the case for me at all during the lockdowns; I gained a lot of energy from spending time alone and it wasn’t necessarily discipline that pushed my compliance but rather my empathy to do my part in saving lives. From a design perspective, I understand that they needed to create an obstacle for players who would normally focus on things like trait goals or Destiny card results, and that they needed to play within the parameters of the base game so they were limited on that front. Like many things in life though, both can be true: I can be critical of their assumption of a Risk/Boredom spectrum but also understand that it will be limited by what is already available in Fog of Love.

Overall, if I were to identify specific moments of my life during lockdown and turn them into scenes, there would be much more spice and conflict than the expansion provides. I’ll admit that there were a lot of scene cards that didn’t get their chance in the spotlight so this may be unfair, but the sessions of Love on Lockdown I did have at the table proved to be pretty tame. The lockdowns, in spite of how well or not well we were prepared, were unpleasant in so many ways and a blessing in others. That period of time was certainly more challenging than just on the Risk/Boredom dimension and I would have loved for them to dig deeper than just providing a one-dimensional drama with a reskin.

Love on Lockdown is for anyone who loves the base Fog of Love game and are looking to either add a new expansion or continue to build upon their current expansion collection. However, if the state of the world and the lockdowns from 2020 are unwelcome themes, this expansion is not for you even if you do enjoy the base game. It’s an accurate retelling of that experience as well as very familiar scenes if you were stuck inside with your partner can perhaps drum up uncomfortable memories or feelings, especially with the introduction of being overly risky or overly bored leading to a character expiring can trigger things you may not be ready for.

On the other hand, if you’re ready to explore some of the early experiences you may have had—and hopefully have found more healthy ways to navigate now—the new dimension and the destiny cards included in Love on Lockdown are quite amusing in a roleplaying setting.