We review Dungeon Mayhem, a quick playing card game set in the Dungeons and Dragons universe. Dungeon Mayhem is a filler game that will have players fighting over treasure to try and be the last character left alive. 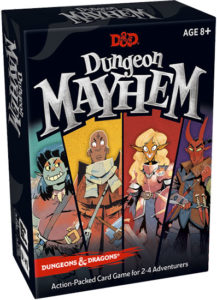 When playing the latest popular fantasy roleplaying game, there are inevitably moments of extended downtime. Tony decides to scout ahead. Jon and Alex haven’t arrived for gaming yet. AnnaMaria hasn’t finished her side quest to retrieve the Rod of Uselessness so that the rest of the adventuring party can enter the plane of Uselessness. Whatever the case, gamers are waiting.

Dungeon Mayhem is a take-that card game for 2-4 gamers eager to slap one another around. The slapping takes 10-15 minutes for 2 players and 30 minutes or so for 3-4 players. Depending on how gamers approach this game, 2 players works well, but it’s different and plays just as fine at 3-4.

Each of the four decks that comes with the game represents a single character. Each card in the deck is an action card with icons in the upper left to reference the effects of the card. Crossed swords deal damage to a target. Shields stay in play for protection. Hearts increase health. Each character also has some unique cards with unique icons and effects.

Part of the tactics in the game is managing a hand of three cards with only 1 action card normally played on each turn. Some cards have lightning bolts on them which grant an additional action. If a player manages to get all their cards played, they draw two cards immediately. Thus, there is some possibility for moving through a deck quickly with lots of actions.

As in Magic: The Gathering, each character has 10 health to start and the last player left with at least 1 health wins. Damage cards played need a character target and calculating when to make a big attack in a game with more than 2 players is tricky. What’s more, players are also forced to play a single card each turn. The overall effect is to force engagement and political decision making, often from the very first turn.

Filler games should be quick, easy, and silly or aggressive. Dungeon Mayhem is all four. It’s got just the right formula for an expandable filler game. Each deck being unique means there’s plenty of potential for additional expansion decks (or standalone expansions) to come afterwards.

There’s the rub though, Dungeon Mayhem also can get old quickly. Players of Magic who enjoy the complex nature of deck combos won’t be impressed here, but Dungeon Mayhem does have the basics of unique deck theme and mechanics. The character builds are unique enough that it’s memorable to play one vs the other. That being said, once players have seen a character played 10 times, that’s more than enough to set the game aside for a long while.

The real issue is that the lack of complexity really relegates this game to a younger and less scrutinizing audience. The 8+ rating on the box is accurate and even 7-year-olds can grasp the game concepts. The challenge is that older players can quickly tire of the randomness while younger players might not pick up on the careful thought that has been put into each character’s play style. Overall, it’s a great mix, even if it grows stale a little too fast.

Dungeon Mayhem is a great filler for roleplaying night. It’s also a solid filler for any other game night where players love to whack one another. It has a sublime depth and variety of play choices that make for engaging games, but when played too often, the shallowness of the choices starts to show. Dungeon Mayhem is highly recommended for not too frequent appearances, at least until an expansion provides four more decks.

Misses:
• Lots of randomness
• Can get old quickly