We review Detective: A Modern Crime Board Game – Season One from Portal Games. Detective Season One promises a more streamlined experience with a better focus on investigation and the things you love about the game. 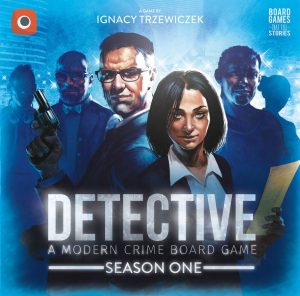 Despite its quirks, Detective: A Modern Crime Board Game is one of my favorite investigative games. I really liked the modern aspect of it and using an actual computer database was a ton of fun. The game even went on to win two of our 2018 Board Game Awards. Yet despite its accolades, there were a few things I wasn’t thrilled about in the game. Detective went a bit overboard on the mechanical nature of the game and sometimes the writing got overly verbose.

However, Portal Games and designers Ignacy Trzewiczek, Merry Trzewiczek, and Weronika Spyra have apparently taken two years of feedback from Detective and created a new game based around it. Enter Detective: A Modern Crime Board Game – Season One. This version promises more streamlined rules and a shorter playtime so we can do what we are really here for… solve crimes.

If you’ve played the original Detective, many things will be familiar to you despite the streamlined nature of Season One. The game comes with three independent cases to solve, which means no overarching plot this time, but you can also now play each case with a different group if you want.

Different from the original is that players will have one day to solve the crime presented by the case. They do this by choosing a lead card to investigate each round. This will involve spending some time, the game’s main resource. Each lead will take anywhere from 1-3 hours of your day. The card will then give you information in the form of an interview with a suspect or witness, examining a location, or other forms of police work. Occasionally a card will let you “dig deeper” by spending a skill token. This lets you flip over the card for extra information that may or may not be relevant to your investigation.

The game also has an integrated, online database that will be used to log evidence, read transcripts, watch surveillance videos, and look up people’s information in a faux police database. It’s also where you’ll answer the questions when you make your final report.

One of the key aspects of Detective is that you never have enough time. You’ll only get through about half of the deck of cards, so you’ll need to use your “gut” to answer the final questions. The game will then give you a rating based on how many questions you got right and how much evidence you found.

As I said in the intro, while I really enjoyed the original Detective, there were some things I didn’t love about it. One was the length. Some cases took 3-4 hours which was just too long for me. It turned it into a game you had to plan your night around, rather than one to pull off the shelf and play. The other issue was that the mechanics sometimes got in the way of the game. Having to deal with authority tokens, stress tokens, and specific skill tokens to manage felt kind of unnecessary and took away from the best part of the game, lead discovery and deduction.

Thankfully, Season One has gotten rid of almost all of that. Now the only resources to manage are time and some skill tokens to dig deeper. Player abilities are even gone, your choice of investigator is for theme only with a suggestion on what role you should play (notetaker, narrator, etc…). Frankly, I’m happy to see authority and stress tokens go the way of the dodo. And the new skill tokens are universal, so no longer do I need to worry about spending my second file token and saving my discussions tokens that may or may not even be needed.

The new playtime for Season one seems pretty spot on. We were able to get through two cases in one session before moving on to another game. I do kind of wish that the game came with more than 3 cases, but for a $30 MSRP, I can’t complain too much. The cases also had some nice variety. Without getting into spoilers, the first case felt the most like a case from the original game, while the second one did a great job of changing things up. Personally, I had a really hard time with the third case. I’m not sure if it was just us, or the case itself, but I was really lost on that one. I even went back and read through many more cards and still had difficulty connecting the dots. I’m curious to hear what others think after having played it. Apparently, I’m no Lennie Brisco.

One thing I thought was excellent was the use of more media in the Antares Database. At least one of the cases had us reviewing security footage and we would scrutinize every detail of the video, occasionally calling out for a “zoom” and “enhance”!. I really wish Portal would incorporate more media into their cases. It was a great way to build immersion into the game. Some voice acting would also be much appreciated instead of just having to read walls of text.

Speaking of walls of text, I was glad to see that the lead cards were toned down a little. There was less day-to-day flavor text on the cards with most of them getting right down to business. I tended to skim past the nonsense in the original game, so this was a welcome change.

Detective: A Modern Crime Board Game – Season One took many of my gripes from the original game and dumped them into a blender. What emerged was a more streamlined game that puts the focus on where it should be: investigating leads and solving crimes.

Granted the core of Detective is still here. So, if you didn’t like the time-limited lead system or the digital integration, then this probably won’t be the game for you. But for everyone else, Detective: Season One is a flat out better experience than its predecessor and one I hope Portal Games focuses on going forward. They managed to improve upon an already great game and make it one I really enjoyed playing. This is the version of Detective I want to play and it’s excellent.

Final Score: 4.5 Stars – A more streamlined version of the original Detective that lets players focus on the fun and moves the rest to the side.

Hits:
• Shorter playtime feels spot on
• Creative cases never felt repetitive
• Less token management and bookkeeping
• All cases are interdependent of each other

Misses:
• Could use more media integration into the database
• Only three cases
• Third case is either really hard or I’m just bad