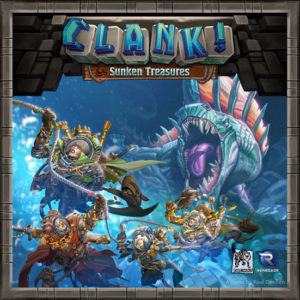 Clank! has become a big hit in the board gaming community. Although steeped in a pretty common paradigm (push-your-luck meets dungeoneering), the structure and perils of the game married with the deck building mechanism have kept players coming back again and again. If you haven’t played it yet, you can find out more in my full review of Clank! here.

The real question is whether the obviously expected expansions will make Clank! even more enjoyable. The first of these, Sunken Treasures, now tests these untouched waters.

The main aspect that Sunken Treasures adds to Clank! is the danger of water. Each room or Crystal Cave can now be “flooded”, giving the space an extra bit of danger. Each turn that characters remain completely in water (moving only in flooded rooms/caves), they take one damage from suffocation. This is avoided by starting a turn or at some point moving to a non-flooded room.

In addition to the new board (double sided), the new cards, monsters, and market items interact with this concept. SCUBA gear (Sorcery Created Underwater Breathing Apparatus) dispels the perils of underwater travel making a stop at the market even more of a priority. SCUBA also aids in the speed of movement between particular flooded rooms.

The second curveball in the expansion are tunnels between rooms that add Clank!. Combined with the new flooded rooms, movement on the map is much more dangerous. Deaths of all adventurers could now be much more common in games.

In short, this expansion is perfect. It does exactly what an expansion is supposed to do. It adds difficulty, a new mechanism, and alternate challenges to consider when playing. Not only does the concept of water open up a lot of variabilities in monsters and play options, but the danger meshes perfectly with the stealth theme. Splashing through tunnels attracts attention? Of course it does.

The additions to the core game are also expanded with a new static monster to defeat. Whereas the treacherous goblin followed you around and delivered a 2 swords to 1 gold ratio, the venomous new goldfish (only available in flooded rooms) static monster can be defeated with 3 swords and deliver 3 gold. This makes the gold victory point machine more viable, but only if you have SCUBA or spend just enough time under water.

The one niggling consideration that frustrates play just as much as it helps it are the many additional cards added to the game. The card row deck just mixes in the new cards, so shuffling the resulting huge stack is a pain. There are also no recommendations for thinning the original deck when adding the new cards, but there’s sure to be some recommendations for this online from other players.

The Clank! Sunken Treasures expansion will easily become the standard play format for multiple groups. This reviewer has played with the expansion more often than the base game simply because the popularity surge of Clank! hit just as this expansion was released. Even though players can play still the base game again, it’s very hard to recall a more seamlessly integrated exciting addition.

If you’d like to pick up a copy of the Clank! Sunken Treasures expansion, you can get it for about $25.

Misses:
• No rules for deck modification