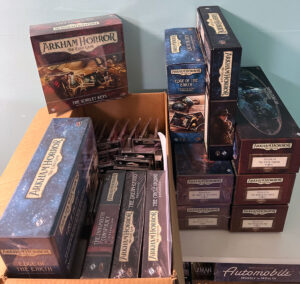 I should PROBABLY restate that. I LOVE to COLLECT Arkham Horror: The Card Game with the intention of playing it in the future. Yes, all of those are unopened. BUT, to be fair, I have played the Core Set four times in its entirety as well as the first two scenarios in Dunwich. Yes, I have a problem. If I was a character in Arkham Horror, my starting weakness would be FOMO.

Enough about me. There were two interesting developments in the AH LCG world over the last month.

First, MJ is moving on from developing the game and FFG has brought in Duke Harrist (lead) and Nick Kory to take over the reins. Do not worry! They have both developed scenarios in the past, with Nick creating the much-loved standalone adventure Murder at the Excelsior Hotel. It appears the game will be in great hands. If you are interested in a Q&A with Duke and Nick, click here.

Second, while integrating your new investigators from The Scarlet Keys and patiently awaiting the arrival of the campaign, a new standalone adventure has been announced. Its name… Fortune and Folly. The premise sounds incredible—it is about planning and executing a casino heist in Monte Carlo. Like all standalone adventures, this can be inserted into any campaign as a side story. But what might make Fortune and Folly stand out is that FFG has promised there will be “a couple of extra features if used as a side-story in The Scarlet Keys campaign!” No further details were provided.

If you would like to learn more about Fortune and Folly, please click here. It is scheduled to be released in April 2023. 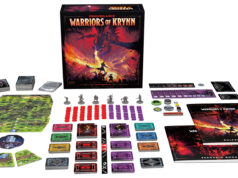 Guess who’s back, Dragonlance – Krynn is back, tell a friend