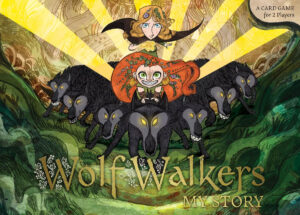 Tony: Have you ever wanted to be a werewolf?

Brian: Like a Team Jacob kind of werewolf, or just your everyday werewolf, hunted by folks who don’t understand the difficulties of being a lycanthrope?

Brian: No. Never once in my life.

Tony: Seriously? Then why did you name your son Jacob? I was SURE it was because of a hidden obsession with Twilight.

Brian: Nope. Just like I didn’t name him Jacob because I love ladders.

Tony: That’s disappointing. I think about it all the time. Like ALL. THE. TIME. But only if it was in a cartoon world, not reality. Do you know what I mean?

Brian: No. Not in the least. Do you mean a cartoon world like Akira or Disney?

Brian: So… an underwater werewolf? Dude, I have literally no clue what you are talking about.

*rustling, followed by an object hitting someone*

Tony: REVIEW THIS AND GET OUT OF HERE. MAYBE NOW YOU WILL UNDERSTAND THE MAJESTY OF ANIMATED WEREWOLVES!!

Wolfwalkers: My Story is a card drafting/placement game where two players take and place cards from a shared deck to try to score the most points. It is based on the Emmy nominated animated film Wolfwalkers. Games play quickly, lasting between 20 to 30 minutes. (Note: A second copy of the game would allow 3 or 4 player games.)

A game lasts 25 turns. During each turn, players do the following:

Once both players have completed their 25 card tableau, they calculate their score by determining if their story cards met the objectives on their scoring cards. The player with the most points wins!

For me, the single best part of this game are the 55 cards. They are the heart and soul of the game and drive my three favorite characteristics of Wolfwalkers.

Most importantly, the card drafting combined with spatial placement is just plain old fun. Not only will you debate if you should draft a story or a scoring card, but WHERE the card should be placed. At the start of the game, the type of card is the harder decision as you are trying to build a high-scoring tableau. Should you draft cards with icons that are on the scoring cards that are already present in the market, knowing your opponent could hate draft the scoring card before your next turn, or take icon cards hoping a scoring card is available later. You have the same dilemma with scoring cards—do you draft icons based on those already in the market or hope they show up later?

As more and more cards are added to your tableau, the difficulty moves from card drafting to card placement. The scoring cards, especially those with higher scoring opportunities, can be complex. Some score based on having icons in a row or column, some on NOT having those icons in a row or column, with others scoring based on icons in certain patterns. Good news—the patterns can be flipped and/or mirrored, so there is SOME flexibility. There is also flexibility in defining your tableau at the start of the game. After your first card, future cards must be placed orthogonally. You can build your cards out however you want until you reach either 5 cards wide and/or 5 cards tall.

That flexibility is needed because your options are reduced as the tableau is populated. By the end of the game, you are hoping you can find a story card that fits existing scoring cards or that a beneficial scoring card is available.

The cards also provide significant replay value. All 55 cards are double sided, with a story card on one side and a scoring card on the other. Once a card is in the market, it cannot be flipped to its opposite side. When you draft a story card, you MUST use it as the story card you drafted. The same applies to the scoring side. While the game is simple as plays fast, every game is unique in terms of how your tableau grows due to the sheer number of story and scoring card combinations that are available.

When a game is entirely card driven, the card art is a top priority as there are no other components, like a board or minis, that will have a table presence. For Wolfwalkers, the card art is simply gorgeous. While I have not seen it yet, I will certainly be watching it if only to better understand the game. I can imagine that playing this game is even more enjoyable if you appreciate the source material.

One complaint I have seen online is a lack of player interaction. I did not experience this problem. It is a drafting game. You interact via drafting cards better than your opponent, or, if needed, hate drafting. The game also includes Opportunity cards that can slightly increase player interaction. Three cards are selected at the start of the game. Both players can use each card ONCE per game. These cards allow players to perform unique actions, such as taking one card from the deck of their choosing, placing one card outside of the grid or switching two cards that were already played.

I really only had two issues with the game. The first is that there is no way to clear the market. This is a bigger issue with the scoring cards because there are only two of them in the market. If there are two dud scoring cards for both players, especially late in the game, one player will have to draft one to allow a new scoring card to enter the game. This is not optimal, especially because your opponent will get first crack at the new card. I am not sure what the solution can be as every card is used (both players 25 card tableau plus the market at the end of the game). I just know that couple of games were not as fun because of unwanted scoring cards ting up the market.

My second issue is standard for games that score based on random cards, similar to Isle of Cats. One player can get lucky with scoring cards that appear that will immediately provide one player with points. This never ruined any of our games as it comes with the territory, but we did have one game completely change due to scoring cards that appeared at the end of the game.

I really enjoyed this game. It is easy to teach and plays fast while having excellent replay value due to the double-sided cards, Permanent cards, and Opportunity cards. I adored the art, so much so that I am going to watch the animated movie it is based on. If you are looking for a quick filler or a family-friendly game, I would highly recommend you try Wolfwalkers: My Story.

Misses:
• Lucky card draws can be swingy
• No way to clear the market