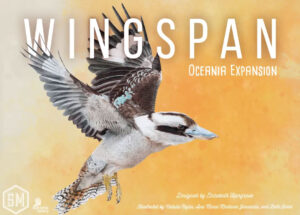 “Here review th-,” Tony began, but was interrupted by me greedily snatching the Wingspan Oceania Expansion from his outstretched hands and running home.

There is no time for pleasantries when a new Wingspan expansion needs to be played!

The Wingspan Oceania Expansion adds several game-changing mechanisms to Wingspan. The new player boards have the most impact (more on this below), followed closely by the new nectar food tokens and the new dice updated to include nectar.

The rest of the Oceania Expansion is similar to the European Expansion—new bird cards (95 to be exact), some with a new bird power (end of game scoring), as well as new bonus cards (five), new goal tiles (four), and a new egg color (yellow).

Nectar, the new food type, will make some actions easier to accomplish. It is considered a wild food resource for playing a bird, as well as for paying for an “any food” ability, or for discarding for an additional food, egg, or card. It is NOT wild for bird powers that require a specific food type. To offset these benefits, all unused nectar is discarded at the end of each round. Relying on using nectar can be risky, especially towards the end of a round. I liked these changes, as it changed how I looked at playing expensive birds, especially when combined with the player board changes. It feels like this expansion was designed to address the last round egg-splosion that often happened in Wingspan. I appreciate the additional end game options!

Nectar ushered in two other changes: new scoring opportunities and new dice. When nectar is spent, instead of returning it to the supply, it is placed in the habitat in which it was spent. At the end of the game, the player with the most nectar in each habitat will earn five points, and 2nd place will earn two points. As for the new dice, nectar was added to the seed and fruit faces of the dice. Not much to say here except for you have 5 new dice! I liked these additions to the game, especially with having more scoring opportunities, especially if you are losing at the end of round goal scoring.

What would a Wingspan expansion be without new birds? The 95 birds add interesting new abilities, as well as a new ability type: end of game scoring. I really enjoyed adding these birds to my game and will play with the base game and both expansions going forward.

Generally speaking, the main concern with expansions is the dilution of content. I was worried about that as well, so I compared the two significant changes that could lead to dilution: the new dice and new birds: 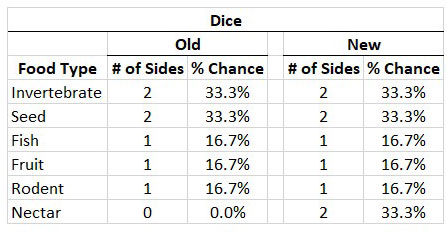 The dice were not impacted at all, with percentages remaining unchanged; however, nectar will make building easier, so that must be considered. For me, it did not deter from my experience – as previously mentioned, it enhanced it.

There is a little bit of dilution, but primarily in Activated powers, the most common power, when expansions are added. Otherwise, the dilution was not as dramatic as I thought it was going to be.

There are other additions that are icing on the cake—the new bonus cards and goal tiles, the updated scorepad, and the yellow eggs. Surprisingly, I can still fit everything in the base game box, as long as I remove the old player boards)!

I only have one minor complaint—the percentages at the bottom of the bonus cards are no longer accurate because of the different combinations of the base games and expansions that can be played. It is a small sacrifice for the improved gameplay, but I always appreciated knowing what percentage of cards in the deck would count towards my bonus card(s).

Hits:
• The new player boards and nectar food type are game-changing
• More great bird with interesting new powers
• New end of round goal tiles and bonus cards continue to expand ways to score
• Can easily be mixed with base game and European Expansion
• Limited dilution of existing content